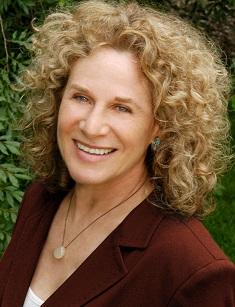 Carole King is a famous American singer, songwriter, and composer, who was named the best female songwriter of the latter half of the 20th century in the US as well as in the UK.

What makes King so special? Read below!

Carole King was born in Manhattan, New York City, on February 9, 1942, to a middle-class Jewish family. Her dad was a firefighter, and mom worked as a teacher. When Carole was an infant, the family left for Brooklyn and bought an affordable two-story duplex.

As a child, Carole King was always surrounded by music. Eugenia, her mother, was an experienced pianist. The woman managed to transmit her love for musical industry to the girl. At the age of 3, Carole started learning to play the piano under her mother's guidance and understood she had a natural flair for it. So, by the moment she turned 10, she had played as good as her mom. Carole practiced regularly to develop her piano skills playing the songs she heard on the radio.

Besides music, young Carole showed successes in studying – she was promoted directly to second grade after kindergarten. Speaking about her education, she studied at the James Madison High School, where she first got acquainted with the art of songwriting. Studying there, Carole King created her own band, named Co-Sines, and later changed its name to Carole King.

Having graduated from school, King entered Queens College, where she met Gerry Goffin – her future husband. The two were both keen on music and started working together.

After finishing college, King began working as a secretary and wrote songs along with her husband. In 1960 their single titled ''Will You Love Me Tomorrow?'' became a real hit – it was their first major breakthrough. The couple quit their jobs to focus more on a music career.

The early 60s were marked by the beginning of Carole King's and her husband's music career. That time they introduced to the world such songs as ''Goin' Back,'' ''You Make Me Feel Like,'' ''Beautiful'' and ''Pleasant Valley Sunday.'' At the moment, male representatives dominated in the industry, and songs expressing a woman's point of view were not heard very often.

However, the mid-60s brought the two difficult times, although they tasted significant professional success together. Gerry happened to be infidel, and King filed for divorce – their relationship was officially ended in 1968. King wrote the song ''The Road to Nowhere'' which told about her heartbreak. So, it was the start of Carole King's solo career.

1968 was marked by her leaving for Los Angeles. There she got acquainted and teamed up with another writer, Toni Stern to release the song, ''It's Too Late,'' which is known as one of the most successful songs of her entire career. At the end of the 1960s, King joined the band The City, with her second husband, Charles Larkey, and Danny Kortchmar. The group released only one collection, titled ''Now That Everything's Been Said.'' Carole King had severe stage fear, and they had to cancel their tours.

Carole's first solo album was named ''Writer,''. It happened to be a big commercial failure. However, the musician 'didn't give up and released one more work ''Tapestry''. It was presented in 1971 and got to the top of the Billboard charts where it remained for 15 weeks. It was the record of staying on the Billboard charts for six years. It was broken only by Michael Jackson's ''Thriller'' in 1982.

Some of the most popular collection's singles such as ''It's Too Late'', ''Locomotion'' and ''Will You Love Me Tomorrow?'' had been written previously, and she sang them. King's third album ''Music,'' also brought the musician fame and money. The collection was certified "gold" by the Recording Industry Association of America (RIAA).

That time the singer presented more albums - ''Wrap Around Joy,'' ''Fantasy,'' ''Thoroughbred,'' and ''Rhymes and Reasons.'' She also teamed up with her ex-husband, Gerry Goffin, for ''Thoroughbred.'' A great number of her collections reached the "gold" status, and she continued being successful as a musician, singer, and songwriter.

Besides music, Carole King dedicated herself to other activities too. So, in the 1980s, she associated herself with social causes. She contributed to the ''Northern Rockies Ecosystem Protection Act.'' King supported the Democratic Party, became actively involved in electoral politics and was against Donald Trump’s victory during the presidential elections in 2016.

In the late 1990s, she returned to the music industry. In 1997 Canadian singer Celine Dion pleased her fans with the hit song ''The Reason,'' which was written by King. 2004 was marked by Carole King's live and cover album, titled ''The Living Room Tour,''. Three years later, she embarked on a tour with young singers Fergie and Mary J. Blige and performed successfully. 2010 brought King partnership with James Taylor and a new live album ''Live at the Troubadour,'' which became a hit.

In 2019 Carole King was invited to perform at the Capitol Fourth annual concert on July 4 alongside Aretha Franklin and Elton John.

Carole King’s net worth is evaluated at $70 million.

In her life, Carole King has married four times. Her first husband was her college boyfriend, Gerry Goffin – they tied the knot in 1959. Later she married fellow musician Charles Larkey - in 1970. Both her marriages fell apart after a few years.

Her next husband was Rick Evers. According to King's admissions, he brutally assaulted her and was a cocaine addict. Rick died of a cocaine overdose a few days after their separation in 1978. She then married Rick Sorenson. Carole also had a long-term friendship with musician James Taylor, with whom she worked on many projects. She has four children, including son Louise Goffin, and daughters Sherry Goffin Kondor and Molly Larkey – all of them are involved in show-business.