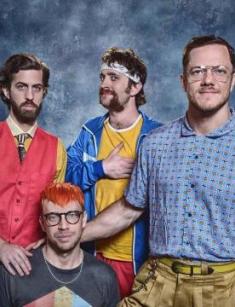 Imagine Dragons are considered heroes of their time. Members of the group create truly high-quality and memorable music in a variety of genres – indie, pop, rock, electronics. The key feature of Imagine Dragons is that in their songs, they raise critical social issues. At the same time, their songs often have positive energy and drive, for which thousands of fans from around the world love the musicians.

The leader of the group named Daniel Coulter Reynolds, began to study music at the age of six and played the piano. When the boy was 13, he secretly used his older brother's computer to record a song about his frustrations and experiences using a voice recorder.

The story of how the Imagine Dragons band was created began in 2008 after Daniel got acquainted with drummer Andrew Tolman. The boys studied together at Brigham Young University.

Over the years, the members of the band changed. Aurora and Andrew left Imagine Dragons a couple of months after the formation of the group. Later, in 2009, Andrew Tolman invited his school friend Wayne Sermon to join the band as a guitarist. After a while, his wife, Brittany Tolman, took the place of keyboardist and back vocalist. After the bassist, Dave Lemke left Imagine Dragons; Ben McKee replaced him.

In 2011, Tolman's wife announced that she had decided to leave the band, and Theresa Flaminio, who played keyboard instruments, took her place for six months. After that, the group did not have a permanent keyboardist, and during concert tours and recording songs in the Studio this position at different times was occupied by Ryan Walker, William Wells, and Eliot Schwartzman.

Now the lineup of the band includes vocalist and multi-instrumentalist, Dan Reynolds (the only consistent member of the group who was there at the very beginning and who actually founded the band itself), guitarist, Wayne Sermon, bassist Ben McKee, and drummer Daniel Platzman.

Imagine Dragons' musical career began with a victory in the "Battle of the Bands," held in one of the universities of Utah, and some other competitions. The band recorded their first song called "Speak to Me" in 2008. Then Dan Reynolds decided to move with all the participants of Imagine Dragons to his hometown of Las Vegas. There the group started to perform regularly in the strip bars and casinos.

The guys found their first success after participating in the music festivals Bite Of Las Vegas and Vegas Music Summit, where they performed in front of the audience consisting of 26 thousand people. The young band was invited to radio broadcasts; authoritative music publications gave them high-profile titles – "Best record," "Best Indie Band," and record labels offered them contracts. As a result, they tied themselves to the contract with Interscope Records.

Together with the release of the fourth EP called Continued Silence on February 14, 2012, via Interscope Records, the band gained real popularity. The single Radioactive instantly won top positions in the world's music charts, was nominated for more than ten awards. It won four of the nominations and received diamond status in the United States because it sold more than 10 million copies.

Even though all four records were greeted by critics and listeners warmly enough, the performers wanted more. In an interview, the lead singer of the group shared that, releasing the first mini-albums, the musicians were "testing the waters" before recording a high-quality first disc.

So it happened – on September 4, 2012, Imagine Dragons presented the album Night Vision, released with the participation of music producer Alex da Kid. Eighty-three thousand copies of the album were sold in just two weeks, and later the record received gold status in seven countries, platinum – in 14 and double platinum in the United States, Sweden, Mexico, and Austria.

Besides, the debut album of the band won the nomination Top Rock-Album of Billboard Music Awards in 2014, and Rolling Stone's magazine named "Radioactive" the biggest rock-song of the year.

Then the musicians returned to their proven path – recorded a mini-release of The Archive, as well as soundtracks for movies – "Battle Cry" for the new part of Transformers, "Warriors" for The Divergent Series: Insurgent, "Monster" for a video game. There was a presentation of individual singles. This phase of the band Imagine Dragons was accepted positively by the audience. After that, they started writing their second full-length album.

At the same time, the musicians went on a tour of Europe and America, entitled Night Visions, named after their album. Their popularity reached such a level that the organizers of the concerts had to increase the number of performances by thirteen. At the same time, the price of tickets remained democratic, so they quickly sold out. Fees amounted to huge sums. According to Pollstar, the concert tour of Imagine Dragons was in the top twenty. At the end of the tour, the band released a CD with live performances.

The musicians repeatedly said that they composed their main hits on the road. The way inspires them, gives a lot of bright impressions, and motivates them to work. On February 17, 2015, the presentation of the band's new album called Smoke+Mirrors took place.

Speaking with journalists, Reynolds repeatedly noted the general tendency of the whole team to perfectionism starting from the choice of the font for the logo and ending with the final selection of songs for the album. After the success of Smoke + Mirrors, the band went on a nine-month world tour. However, sales fell slightly compared to the proceeds from the previous full-length album.

Then the band members announced a creative break, giving fans a documentary about their concert life called Imagine Dragons In Concert: Smoke + Mirrors. However, a couple of months later, they still recorded two soundtracks, one of which – "Sucker for Pain" – was recorded for the famous superhero film Suicide Squad.

The third studio album, Evolve, released two years later, became a storehouse of real hits, such as "Thunder," "Believer," and "Whatever it Takes." The leader of the group called these compositions the way to a whole new level, where he and his colleagues did not hesitate to experiment with genres and forms of music.

On November 9, 2018, the discography of the rock band was replenished with another album called Origins. The music video for the song "Natural" was watched by 300, 000 viewers on YouTube in four hours after the release. The album includes such songs as "Bad Liar," "Digital," "Cool Out" and others.

In 2019, the band Imagine Dragons continues to give grand concerts around the world, to engage in charity and record new successful songs.

For feedback from their audience, the musicians post photos, videos, and texts on the official Instagram profile, which is followed by millions of subscribers.