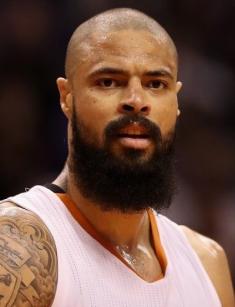 Tyson Chandler is a professional basketball player who is currently performing for the Houston Rockets as a free agent. He is also known for his international achievements, such as the Olympic Gold medal in 2012.

The future sportsman was born in fall 1982 in Hanford, California. The boy and his siblings grew up fatherless: the mother, Vernie, and the grandparents had to raise the kids alone.

The family lived on a farm not far from Fresno, California; little Tyson learned how to treat animals there. He also practiced basketball thanks to his grandfather, who made a rim for his grandson.

When Chandler turned nine, he moved to San Bernardino. Peers bullied the tall boy and invented stories that he was actually older and had to repeat a year several times at school. Under those circumstances, a basketball court became a safe space for Tyson. When he showed his brilliant abilities, the young man left for Compton famous for its Dominguez High School for young athletes.

It was an entirely different world. Chandler’s talents were finally appreciated, and he joined the successful team led by Tayshaun Prince. When Prince graduated, Tyson turned into the major varsity celebrity; many fans wanted his autograph.

Throughout his career, Tyson has changed many clubs. His debut took place during the 2001 draft: the Los Angeles Clippers selected him and immediately sold him to the Chicago Bulls. In the same period, young Eddy Curry was taking his first steps in the NBA; the Bulls had many hopes that the newbies would bring new energy to the club.

However, there were no particularly bright achievements; Chandler left the team for the New Orleans Hornets in 2006. Some injuries prevented the young man from regular participation; still, he rehabilitated by 2008-2009 and became the club’s leader in field goal percentage and rebounds per match.

The next season, Chandler joined the Charlotte Bobcats; 2010 was marked with the collaboration with the Dallas Mavericks. Since that time, the athlete became a free agent. He played for the New York Knicks (2011-2014) and then reunited with the Mavericks for a year to leave them soon.

Three seasons with the Phoenix Suns were mixed: the sportsman had some traumas, yet his results were to be proud of. Chandler broke several franchise records and was frequently selected to play: for example, he appeared in 47 out of 57 matches in 2016.

In 2018, the man changed teams again and went to the Los Angeles Lakers.

Tyson Chandler’s national career has been equally splendid. The athlete became a notable figure in 2008 when he was appointed the first alternate for the Olympic Games in Beijing.

The real fame came in 2010 when Tyson helped his team win the FIBA World Championship; America had not had such excellent results since 1994. Two years later, Chandler did not let his country down in London: the national team gained the gold medal at the Olympic Games.

Tyson’s personal life has been just as successful as his career. He married his long-time girlfriend, Kimberley, in 2005 and got three kids: Tyson II, Sacha-Marie, and Sayge.

The spouses are famous for their philanthropy: for example, they helped victims of Hurricane Katrina and collected necessities for them. Kimberley actively supports her husband and often shares pictures with him and the children on Instagram.

In summer 2019, the sportsman signed a contract with the Houston Rockets. The club provides him with a good salary: more than $2.5 million annually, and it is only an official minimum. Tyson Chandler’s net worth is $85 million in 2019.