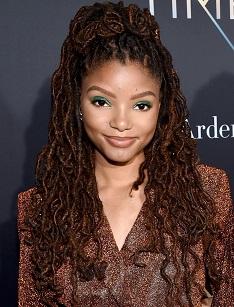 Halle Bailey is an American singer and actress, best known as one-half of the popular duo “Chloe x Halle”. At the age of 19, Halle has already reached success. Her perfect pitch and talent for acting has credited her with achievements. Read the biography and get acquainted with the celebrity!

Halle Bailey’s birthplace is Atlanta, Georgia, the United States – she was born there on March 27, 2000, to the family of Doug and Courtney Bailey. She has a younger brother and an elder sister Chloe Bailey who is also a singer and actress. Their parents have always supported the children, encouraged to pursue their dreams.

Halle did not attend a regular school and was homeschooled. Their family moved from Atlanta to Los Angeles, where she graduated from high school on June 8, 2018.

As a child, Bailey started learning to play the cello and violin by watching YouTube tutorials. Her elder sister Chloe who was keen on music inspired her for it. Their dad quit his job and began working as his daughters’ manager, helped them arrange concerts all over Atlanta.

Halle and her sister started uploading videos on YouTube on their channel “Chloe x Halle” – the first one was entitled “Love Is You.” Due to the girls’ talent, they managed to get much attention from listeners and critics. They published covers of Beyoncé’s “Best Thing I Never Had” and “Countdown”; Lil Wayne’s “How to Love” and Alicia Keys’ “Girl on Fire.”

September 23, 2013, was marked by releasing of the duo’s critically acclaimed EP “Uncovered.” On December 22, 2013, the sisters published a cover of Beyoncé’s “Pretty Hurts” – it became a crucial point in their career. So, the cover went viral, caught the attention of Beyoncé, and she also shared it on her Facebook page. It led the girls to the contract with Beyoncé’s own music label Parkwood Entertainment in 2015. Halle and Chloe worked under The Queen Bey’s guidance.

“Chloe x Halle” made its official debut under Parkwood Entertainment with the EP “Sugar Symphony” on April 29, 2016. They were invited by the first lady Michelle Obama to perform at the White House Easter Egg Roll with their new album’s track “Fall.” In June 2016, the sisters sang at the YouTube Music Foundry and the BET Awards. The same year, “Chloe x Halle” were the opening acts for Beyoncé’s The Formation World Tour and Andra Day’s Cheers to the Fall Tour.

On March 16, 2017, the duo presented mixtape “The Two of Us.” The following year, they pleased their fans by releasing studio album “The Kids Are Alright.” The collection advanced to the top of charts, won two “Grammy” nominations for Best Urban Contemporary Album and Best New Artist in 2019. Its song “Warrior” was used in the 2018 movie A Wrinkle in Time. On February 3, 2019, Halle and Chloe sang “America the Beautiful” at Super Bowl LIII. In April 2019, they published the single “Be Yourself” for the movie Little. Halle has also walked the runway for “Dolce & Gabbana” and “Rodarte” along with her sister Chloe.

Besides music, Bailey has also dedicated herself to acting – her first role was in the 2006 romantic comedy movie Last Holiday. In 2012, fans could see her playing in the movies Let It Shine and Joyful Noise. Later she got the roles in House of Payne (2007), Austin & Ally (2013), Grown-ish (2018 – present). Alongside her sister, Halle wrote the theme song (Grown) for the show Grown-ish in December 2017.

In 2019 Disney announced its plans to remake its classic The Little Mermaid with a live-action cast, and fans of the movie have been wondering who would be cast as the movie’s protagonist, Ariel. In June, after several months of auditions, it was revealed that Ariel would be played by Halle Bailey. In an interview, young celebrity shared it was her dream to play a princess.

Since Ariel in the original cartoon is a white, red-headed young woman, fierce backlash filled Twitter.

Speaking about Bailey’s relationship, no news regarding her dating and boyfriend has surfaced in the media.