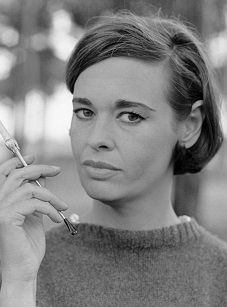 Gloria Laura Vanderbilt was an American artist, author, actress, fashion designer, heiress, and socialite. In her life, she had succeeded in many fields of acting – had modelled for fashion magazines, launched her own clothing line, starred in movies and TV shows and written books. Read below more about the talented celebrity!

Gloria Laura Vanderbilt's birthplace is Manhattan, New York – she was born there on February 20, 1924, to the family of wealthy and popular railroad heir Reginald Claypoole Vanderbilt and Gloria Morgan. It was her father's second marriage.

Their family was very religious. Initially, Gloria was baptized in 'The Episcopal Church,' but after her father's death, she was raised according to the canons of the 'Catholic Church,' owing to her mother.

Vanderbilt has a half-sister from her father's first relationship with Cathleen Neilson. When Gloria was 18 months old, her father died, and her mother took her on trips to Europe alongside Vanderbilt's aunt, Gertrude Vanderbilt Whitney, a mistress to the erstwhile Prince of Wales. The trust fund money, which was worth $ 5 million, belonged to Gloria. Her aunt severely opposed Gloria's mother and said that her lifestyle was dangerous for the mental health of young Gloria.

The situation became a subject of people's heated debate and was on highlights of almost every media. The court sometimes had to keep everyone out and listen to Gloria to hear her genuine opinion, without any pressure. Finally, according to the judge's decision, the custody of Gloria went to her aunt. The girl moved to a luxurious house – there she lived alongside several cousins.

Speaking about Gloria's education, she studied at the Greenvale School in Long Island and later entered the Wheeler School and Miss Porter's School. She also attended the Arts Students League to develop her artistic talents. At an early age, Vanderbilt was hugely influenced by her aunt – she was a famous artist and a sculptor and transmitted her love for arts to Gloria.

As a teenager, Gloria Vanderbilt started garnering recognition in the by-lanes of Hollywood. She dated men many years older than her. Her personal life has been discussed fiercely in media, and she managed to become a famous socialite. Her career started by learning acting at the Neighborhood Playhouse under the guidance of Sanford Meisner. Attending the Arts Students League, she became famous for her intricate, deep artwork, including oil and water-color paintings.

In the mid-50s, Vanderbilt started dedicating herself to acting. That time she appeared on famous TV shows such as Playhouse 90, The Dick Powell Show, Studio One in Hollywood, The Tonight Show Starring Johnny Carson, Person to Person, and The Oprah Winfrey Show.

1955 brought Gloria the role of Elsie in a revival of William Saroyan's The Time of Your Life. In 1981 she starred in a two-part episode of The Love Boat in 1981.

At the age of 17, she was invited to model for 'Harper's Bazaar' magazine. She promoted her clothing and fragrance lines, collaborated with famous photographers all over the world.

The 70s were marked by the launching of Vanderbilt's clothing line – she produced jeans, blouses, shorts, scarves, glasses, pants, dresses, jackets, etc. Indian fashion designer Mohan Murjani launched his designer jeans collection with Gloria's signature embroidered on the back pocket of the jeans along with her swan logo. She asked for the jeans with her logos to be made slightly tighter in fit than the jeans that were in fashion at that time.

The jeans line brought Gloria success, and she ventured her logo into leather goods, sheets, shoes, and accessories. That time designers preferred to stay in the background without appearing in public. However, on the contrary, Vanderbilt liked attending major events and sharing her ideas openly.

In 1978 Gloria traded the rights to use her logo to Murjani. She went ahead and launched her own fashion company named 'GV Ltd.' There are eight perfumes which were launched under her brand name between 1982 and 2002. She also partnered with the American companies Jones Apparel Group, Avery, Caprice and many others.

Although Vanderbilt was a successful artist, she had not shown her works in any exhibition until 2001. Her first exhibition was named 'Dream Boxes' and held at the Southern Vermont Arts Center – it brought her huge critical and commercial success. In 2007 she arranged another exhibition where she presented 35 works.

Although she remained a well-respected artist throughout her life, she was never able to dedicate to fine arts as much time as she wanted to.

In her life, Vanderbilt had a long list of relationship. She had been married four times, divorced three times.

At the age of 17, she married the press secretary of the famous American businessman and film producer, Howard Hughes - Pat DiCicco. That time Vanderbilt tried to escape from her aunt's control and decided to find a husband. The two tied the knot in 1941. According to Vanderbilt's admissions, her husband had abusive behavior and unwieldy temperament.

The two had a huge age difference – while Vanderbilt was 20, her partner was 62. They were married for ten years and had two children, Stan, and Christopher Stokowski. Through them, Vanderbilt had several grandchildren.

Stokowski encouraged the woman to pursue her passions in painting, poetry, and acting, but kept her socially isolated.

The spouses' relationship ended in divorce in 1955.

Shortly after, Vanderbilt became a wife of film director Sidney Lumet. Their relationship lasted seven years and resulted in no children. The two remained lifelong friends

Besides acting and art, Vanderbilt also tried out writing. In her career, she published many fiction and non-fiction books, three novels and four volumes of memoirs. Moreover, she also regularly contributed to 'The New York Times,' 'Elle,' and 'Vanity Fair.' In April 2016, the woman published 'The Rainbow Comes and Goes: A Mother and Son on Life, Love, and Loss,' written by Gloria and her son Anderson Cooper.

Famous design editor Wendy Goodman has penned a novel based on Gloria's life, titled 'The World of Gloria Vanderbilt.' The book told about Vanderbilt's personal life, featured her pictures which had never been published before.

In April 2016, viewers of 'HBO' could watch the documentary 'Nothing Left Unsaid: Gloria Vanderbilt & Anderson Cooper' – there Vanderbilt and her son asked each other different questions and shared secrets.

Vanderbilt died at her home in Manhattan on June 17, 2019, aged 95. No cause was given. She was buried next to her son Carter and last husband Wyatt in the Vanderbilt family plot at the Moravian Cemetery in Staten Island, New York.

By the moment of Gloria’s death, her net worth had been evaluated at $200 million.