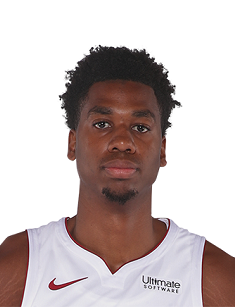 Hassan Niam Whiteside is a famous American professional basketball player who currently performs for the Miami Heat of the National Basketball Association (NBA). In his career, he has always shown high stats and has won several awards. Check out this biography to know about his childhood, family life, career, achievements and other facts.

Hassan Whiteside was born on June 13, 1989, in Gastonia, North Carolina to the family of Hasson Arbubakrr and Debbie Whiteside. His father left them when Hassan was a child. He has several brothers – their single mother worked extra hours to feed the big family. Speaking about Whiteside's education, he studied at Hunter Huss High School, Ashbrook High School, and Forestview High School.

As a high school junior, Hassan left with his father for Newark, New Jersey where studied and played at East Side High School. There he made average results of 18 points, 10 rebounds and 5.5 blocked shots per game. Having closed the season, he returned to North Carolina for the 2007–08 school year and enrolled at Hope Christian Academy (Kings Mountain, North Carolina).

When it came to choosing a university to attend, Whiteside entered Marshall University. There he joined its students' basketball team to train under the head coach Donnie Jones, and it didn't take him much time to come to prominence.

As a freshman, he succeeded to record 14 points, 17 rebounds and 9 blocked shots over 29 minutes fighting against the Ohio University Bobcats on November 28. Due to the match, journalists from ESPN The Magazine invited him to an interview and dedicated highlights and College Basketball Column to the game. The following month, the sportsman made a triple-double of 17 points, 14 rebounds, and 11 shots – it was a fight against the Brescia Bearcats.

In March 2010 Whiteside decided to take part in the NBA draft.

Performing at the draft, Hassan was selected by the Sacramento Kings. In the Kings' season opener, the sportsman recorded two fouls in two minutes against the Minnesota Timberwolves. In January he got injured, underwent surgery to repair a partially torn patellar tendon in his left knee and had to miss six months of playing.

In December of the same year, he joined the Sioux Falls Skyforce of the NBA Development League. In January, the franchise traded him to the Rio Grande Valley Vipers. Hassan Whiteside got out of the team before the playoffs to join Lebanese Amchit Club. He performed in 3 matches for the Club and left it. Shortly after, he became a member of the Chinese NBL team, the Sichuan Blue Whales.

November 2013 was marked by Whiteside's return to Lebanon – he was signed to Al Mouttahed Tripoli. In April Whiteside was waved out and came back to China, Jiangsu Tongxi team. Having taken part in 17 games, the sportsman scored on average 29.6 points, 16.4 rebounds, 1.3 assists and 4.3 blocks per game.

Hassan Whiteside spent Summer League with the Toronto Raptors and preseason with the Memphis Grizzlies. Later the player came to the Grizzlies' D-League affiliate, the Iowa Energy.

In November 2017, Hassan signed a contract with the Miami Heat. Match against the Brooklyn Nets held on December 13 brought him his first career double-double of 11 points, 10 rebounds, and 5 blocks.

On January 11, 2015, fighting against the Los Angeles Clippers, he scored 23 points, 16 rebounds, 2 steals and 2 blocks and led the Heat to a 104-90 victory. January 25 was marked by his triple-double of 14 points, 13 rebounds, and 12 blocks – it was a game against the Chicago Bulls. On February 4, Hassan's team faced the Minnesota Timberwolves. His 24 points on 12-of-13 shooting along with 20 rebounds didn't help the franchise win – the Heat were beaten.

On March 2, 2015, Hassan was mixed up with a scandal-turned-fight with Alex Len, the Phoenix Suns player. On March 3, he was fined $15,000. The same month, he got a one-game suspension as a punishment for striking Kelly Olynyk during the Heat's unsuccessful match against the Boston Celtics. That time Whiteside took part in the NBA Most Improved Player Award voting and got 4th place. Totally, in his first season with the Miami Heat, the player made on average 11.8 points and 10 rebounds per game.

Match against the Houston Rockets held on November 1, 2015, was one of the best season’s games – he registered 25 points. The Heat won with a 109-89 score. November 17 brought Hassan his second career triple-double of 22 points, 14 rebounds, and 10 blocks – it was a lost game against the Minnesota Timberwolves. On November 23, playing against the New York Knicks, Whiteside blocked five shots, giving him 63 through 13 games.

On January 15, 2016, the Heat faced the Philadelphia 76ers (led by Jimmy Butler) – Hassan registered one more triple-double of 19 points, 17 rebounds, and 11 blocked shots. Generally, the match was successful for the franchise – they defeated the opposers 98-95. On January 22, Whiteside was excluded for 6 games because of a left hip injury. The sportsman came back to playing on February 3 – he fought against the Dallas Mavericks and registered 10 points, 9 rebounds, and 5 blocks.

The season 2017 was started with a 116-109 lost match against the Orlando Magic. Then Hassan Whiteside made 26 points and 22 rebounds. At the end of October, he got injured and missed 5 games because of a bruised knee. He came back on November 1, 2017 – it was a winning match against the Chicago Bulls. Later the sportsman was excluded again for 11 games because of a bone bruise in his left knee. Having returned, Whiteside scored 7 points and 8 rebounds in 18 minutes fighting against the Orlando Magic. On January 17, 2018, Hassan showed the highest result in the season - 27 points, 13 rebounds, and six blocks. Whiteside's perfect playing led the franchise to a 106–101 victory over the Milwaukee Bucks. In March, the player missed 9 games because of a hip injury.

On October 29, 2018, he showed high results again – he scored 24 rebounds, 16 points, and 5 shots. However, it didn't save the team from a loss to the Sacramento Kings. In match against the San Antonio Spurs on November 7, the sportsman scored 29 points, 20 rebounds, and 9 blocked shots.

Fighting against the Brooklyn Nets on November 20, Hassan registered 21 points, and 23 rebounds – the Heat lost the match 104-92. In March 2019, he was relegated to a reserve role after coming off a hip injury.

According to Basketball-Reference.com, Hassan Whiteside’s net worth is evaluated at $35 million. His 2018-2019 salary is $25,434,263. As one of the wealthiest basketball players, Whiteside has his own collection of expensive cars.

In 2017 Whiteside was mixed up with a money scandal. Michael Avenatti, the former attorney of his ex-girlfriend, Alexis Gardner (by the way, she was expected to become his wife), has been accused of allegedly hiding a payment Whiteside made to her.

In January 2017, Whiteside wired $2.75 million to Avenatti, with the intent of most of the money to be received by Gardner. Gardner had hired Avenatti to help negotiate a settlement of a potential lawsuit against Whiteside. Whiteside agreed to pay $3 million in total. The $2.75 million wire served as an initial payment. Prosecutors said Avenatti was entitled to take over $1 million in legal fees. However, he allegedly took $2.5 million to buy a share of a private jet.

Among Whiteside’s career earnings, there are following achievements: