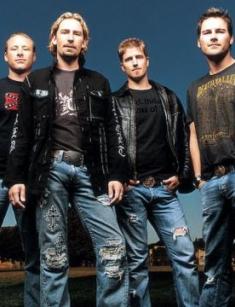 Nickelback is a Canadian rock band founded by the Kroeger brothers in 1995 in the provincial town of Hanna. The musicians won the love of their fans by the high-quality sound of the music, attractive voice of the singer Chad Kroeger, as well as by the profoundness of the lyrics. Nickelback is in the top list of the best rock bands of the early 21st century according to the magazine about the music industry called Billboard.

Brothers Chad and Mike Kroeger founded Nickelback. The idea of creating a musical group arose from Chad, and his brother supported the desire to work on a joint creative project. The young people invited their cousin Brandon to join their duo as a drummer, as well as Ryan Peake, who became the rock-band's guitarist.

The history of the band began with naming. Thinking about the name for the group, the participants considered such names as Point of View, Village Idiot, and BRICK. The insight came to the guys by accident. Mike Kroeger worked in a coffee shop and offered coffee for 45 cents. Giving customers their change, he repeated the phrase: "Here's your nickel back." This combination of words became the very name of the band. The musicians liked the way it sounded, and that's how a new rock-band was born.

The guys had difficulties deciding on the style of their art. The young people were always in search, working on covers of popular songs, but it did not attract listeners. It was challenging to win the audience's love. Chad Kroeger decided to record an album with his own songs. This required financial investments, which were taken by the parents of the musicians.

Kroegers' stepfather did not think much of the idea but provided the necessary amount to get started. The album was recorded in Vancouver. The next move was to promote the music to a broad audience. Musicians organized the concerts and did all the advertising by themselves. They held a flashmob vote to support their music on the radio.

The young people went from one radio station to another, offering their record. The album Hesher became the debut in the creative biography of Nickelback. For future development, the guys needed more space and opportunities, that's why the band moved to Vancouver, where they recorded the next album, Curb. Together with the already popular band 3 Doors Down the guys gave concerts in the framework of the tour.

Nickelback were lucky: they were noticed by the producers of the label Roadrunner Records, specializing in the direction of hard rock. The next album Silver Side Up was released in 2001 and was presented on the terms of the contract with the musicians. The success of the record was deafening: it became gold, platinum, and then multi-platinum.

The song "How You Remind Me" was a hit and topped the Billboard Hot 100. People all around the Netherlands, Germany, Australia, and Great Britain listened to Nickelback's music.

The key feature of the band that attracted the attention of fans was the expression of personal feelings, emotions, and life experience. For example, in the composition "Too Bad," Chad Kroeger touched upon his memories of childhood and shared his thoughts about his father, who left his family and sons. In 2003, the musicians released the album The Long Road, which had a clear-cut style, loved so much by their fans.

The professional sound brought the band to a new level. Melodic and at the same time, the aggressive tone of songs combined with revelations in the text conquered the audience. After the presentation of the album, Nickelback tirelessly performed with concerts at venues around the world, delighting the audience and gradually occupying a well-deserved place on rock Olympus.

A great achievement for the rock band was the recording of the soundtrack to the movie Spider-Man. The song called "Hero" formed the basis of the music video, which regularly appeared on the air of the MTV channel. The single "Someday" that followed disappointed their fans. The audience saw self-copying in the work of musicians and decided that the commercial component for them was more important.

Meanwhile, some changes appeared in the line-up of the band. Drummer Brandon Kroeger was replaced by Daniel Adair, who previously performed with 3 Doors Down. The band released the album "All the Right Reasons." The album included five singles that formed the basis for five music videos. In 2008 Nickelback presented the song "Dark Horse."

The popularity of the group gained momentum. The musicians performed concerts in different countries of the world, became headliners of significant festivals and collected stadiums for solo performances. In 2010 Nickelback was invited to sing at the closing of the Olympics in Vancouver. The ceremony was marked by the song "Burn It to the Ground."

In 2011, fans of the rock band happily greeted the album Here and Now. The central singles of the album were "Bottoms Up" and "When We Stand Together," which immediately began to broadcast on the radio. The group went to meet the fans and published the songs on the official website, providing them with free access.

A couple of months later, a music video for the song Nickelback "When We Stand Together"appeared on the air. At the end of 2011, it turned out that the album took 37th place in the top of the most successful albums of the year. The volume of sales of the disk made 1, 1 million copies.

In 2013, the musicians began to work hard to record the next album. In the summer of 2014 Nickelback presented the single "Edge Of A Revolution," and in early September – the song "What Are You Wating For." The discography of the band was replenished with the album No Fixed Address. In 2017, the band released a record called Feed the Machine.

It is difficult to exaggerate the popularity of Nickelback. This rock band became legendary. Photos of the band members regularly appear on the covers of glossy magazines, and the first chords of musical compositions cause awe even in those listeners who are not fans of the group.

The songs "Far away," "Lullaby," "If Today Was Your Last Day" became recognized hits. Nickelback became a part of the musical trends of 2000-2010 and did not stop there. Now the musicians are developing and experimenting.

In 2019, heavy-metal fan Mike Kroeger spoke in an interview about the desire to record an album of heavier music. The bassist stated his passion for Metallica, Megadeth, and Slayer, hinting that the next record may have a sound similar to these bands.