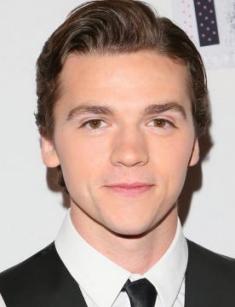 Joel Courtney is a young American actor who became famous for the role of Joe Lamb in the science fiction film Super 8, shot in 2011 by producer Steven Spielberg and director J. J. Abrams. He also played the leading role of Peter Moore in the detective series The Messengers.

Joel Courtney was born on January 31, 1996, in Monterey, California. Later, the family of the future actor moved to Moscow, Idaho. In 2010, during the summer school holidays 14-year-old Joel made a trip to Los Angeles where he was going to film in a commercial and earn $100.

Joel prefers to keep his private life a secret and never tells any information about the members of his family in interviews or on social media. However, it is known that Joel Courtney has two brothers, Caleb and Josh, and sister Chantelle.

Casting director Patti Kalles advised Joel to audition for the fantasy thriller Super 8 directed by J.J. Abrams. The young actor followed the advice and eventually got the leading role in his first film. In 2012, Joel won the Saturn Award for Best Performance by a Younger Actor.

Joe Lamb is the protagonist of the film Super 8, the son of an assistant sheriff. His mother died in an accident at a metallurgical plant. The hero meets an aggressive alien cannibal and persuades him to leave Earth.

Joel collaborated with Elle Fanning who portrayed Alice Dainard. Joe's friend, Charles, persuaded her to play in his amateur zombie film. As a result, Alice falls in love with Joe and gets involved in a dangerous adventure with an alien.

The same year, the drama Sins of our Youth premiered, starring Joel Courtney. The actor played David, a teenager who, together with his brother Tyler, decided to have fun when the parents left them in the house alone. The boys invited their friends and went out to the yard to shoot at the Christmas lights with their father's gun. As a result, they accidentally murdered a younger boy who was nearby. Instead of calling the police, the teenagers began to figure out how to get rid of the evidence and the body.

Later, Joel starred in the mystical thriller Don't Let Me Go. The actor played the role of Nick Madsen, a gloomy teenager who went camping with his father and faced otherworldly forces.

In 2015, the first and only season of the TV show The Messengers was released. It focuses on five strangers who suddenly die when an unknown object falls to Earth. Then these people come to life in incredible ways and discover their superpowers, and at the same time, they learn that they are angels who are destined to prevent the Apocalypse.

Joel played the role of Peter Moore, a high school student and orphan with a problematic character and suicidal thoughts. After the resurrection, the hero has extraordinary physical strength. One day, Peter inadvertently kills one of the guys who hurt him and goes on the run. Having met the rest of the Messengers, Peter finally finds a family that he has never had.

The actor also appeared as John in two episodes of the series The Haunting Hour: The Series. It is a horror film for children and teenagers, and its creators tried to avoid violence, focusing on a mysterious and frightening atmosphere. In each episode, the young heroes encounter zombies, revived dolls, vampires, and other fantastic creatures. The script is based on the stories of Robert Lawrence Stine, the author of fiction novels for teenagers.

Joel played in one of the episodes of the TV show Agents of S.H.I.E.L.D., portraying Nathanael Malick, the brother of Gideon Malick, one of the antagonists of the series. In 2017, the actor appeared as Luke in one episode of the police series APB.

The 2016 film Dear Eleanor shows the events in the United States during the Cold War, in the 1960s. The story centers on a teenage girl whose mother is dead, and her father is heartbroken and needs help. The heroine has to keep the house and take care of her younger brothers and a sister.

Joel plays the role of Billy Hobgood, a young man who likes the heroine’s friend. The feelings made Billy act rashly and send the girl a fake letter from Eleanor Roosevelt. As a result, the friend persuades the heroine to travel across the country to meet Eleanor, the first lady of the country, whom the heroine's mother always admired.

Joel Courtney has an account on Instagram, where people can learn about his day to day affairs and see the latest photos.

According to some sources, in 2011, Joel Courtney’s girlfriend was American actress Katherine McNamara, best known for her role of Sonya in the science fiction movie Maze Runner: The Scorch Trials.

In 2014, the actor began dating actress Isabelle Fuhrman, who played a title role in the horror film Orphan.

In 2018, Joel Courtney starred in the English-American romantic comedy The Kissing Booth. The actor plays one of the two title characters, Lee Flynn. Lee and the other heroine, Elle Evans, were born in the same hospital on the same day and have been the best friends throughout their lives.

The young people considered their relations to be unique and even created a set of rules, which they followed, communicating with each other. However, Elle later falls in love with Lee’s older brother, and the hero becomes jealous and quarrels with his brother. So, Elle risks losing both young people.

Joel Courtney has a net worth of around $2 million.