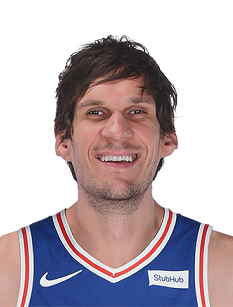 Born in SFR Yugoslavia, Boban Marjanović started a professional basketball career in KK Vršac (Serbia) in 2006. Played in Serbian and Russian clubs during nine years, he appeared in NBA in 2015, as a player of San Antonio Spurs. In his NBA career, he was playing for Spurs, Pistons, Clippers, and 76ers.

Boban joined Dallas Mavericks on July 3, 2019. He represents the national team of Serbia. He won the junior world cup and Europe championship. Boban plays at a center position. Also, Boban has a wife and two children. He has a net worth of $20 million, including all of his properties and earnings.

The birthplace of Boban is a small town Boljevac, the population of which is about 12 000 people. He was born there on August 15, 1988. He was very tall, and parents decided to give him to basketball. At the age of 14, his height was 6 feet 10 inches. He played in local junior teams until 2006.

In 2006 Boban joined Hemofarm and participated in the Basketball League of Serbia. Spent four seasons there, he moved to Russia.

He played for CSKA and Nizhny Novgorod, making timeout to play for Lithuania’s clubs. He couldn’t show all his abilities in Russia and returned to Serbia, where he played for Mega Vizura and Crvena Zvezda. In 2014-2015 Boban won national championships, received some individual awards and set several statistical records in Euroleague. In 2015 he decided to continue his career in the USA.

On July 13, 2015, Boban signed a one-year contract with Spurs. He spent his debut game in NBA on October 30. In his first season, he made then career high 22 points and 14 rebounds. He was several times sent to NDBL. According to basketball reference, Boban scored 297 points, 194 rebounds and 23 blocks in 54 games.

In summer 2016 Boban joined the Pistons. He played only 8 minutes per game there. However, he was in the fire off the bench in several games. In December 2018, Boban achieved cult status in the NBA and sat above Michael Jordan, LeBron James, and every other player in the league’s history in one statistical category.

PER, one of the most commonly discussed statistics in the world of analytics, is often criticized for its limited capacity to measure impact in defense and how it can favor those who feature in limited minutes, like Marjanović. The system seemed to be a pretty good indicator of elite players in the NBA before him. Marjanović’s place on that list was weird, and nothing more than a statistic anomaly. He lost to all other players of the list in a complete statistical comparison.

In winter 2018 Boban was traded to LA Clippers, where he stayed for a year. On April 10, Clippers played against New Pelicans. Serbian center, being not just tall but thick and with a long wingspan, teased Anthony Davis with the ball like a child, whom he didn’t want to get a piece of candy. That episode became the NBA meme. Helpless Davis and his teammates laughed at that situation.

Marjanović appeared in Philadelphia in February 2019. He spent 22 games for the club and helped to get into the playoffs.

On July 3, 2019, the tallest active NBA player signed a two-year $7 million contract with the Mavericks, including $7 million guaranteed, and an annual average salary of $3.5 million. The transaction marked the end of an era. Since 2016, Marjanović has played with Tobias Harris, forming a bromance that has turned into a social media phenomenon and a web series.

The two were traded together to the Clippers by the Pistons in 2018 and then to the 76ers in 2019. Harris re-signed with Philadelphia in summer. They exchanged touching farewell comments on Twitter. Tobias was like a brother to Boban.

In 2007 Boban became the world champion in the U-19 category. A year later, the U-20 national team won the European tournament. Boban was a candidate to the senior national team in 2009 and 2010 but could debut only in 2011. He missed the 2015 Eurobasket, because of injury, but two years later he won silver medals at the 40th edition of Eurobasket.

Boban is married to Milica Krstic. The pair tied the knot in 2014, six years after they met each other at a party. Boban and Milica spent two weddings in 2014. The first held on July 3 in the Mexican beaches while the second was in Serbia, ten days later. They have two sons. In 2016 Milica gave an interview, in which she spoke about their family’s life.

Boban made his first movie cameo in 2015, appeared in the Serbian sports drama. In 2019 he took part in John Wick: Chapter 3. The movie started shortly before a $14 million bounty on John Wick’s head went into effect, and Marjanović, playing a contract killer named Ernest, hoped to cash in by killing Wick in the New York Public Library.

Boban acquitted himself well; he seemed quite at home in front of the camera for a guy in his first acting role and fought with more skill and fluidity than other gigantic men who had been cast as ass-kickers just because of their size. He moved well in the confined spaces of a library stack and even controlled the fight for the first few exchanges of blows. Boban could hold Keanu Reeves at bay thanks to his immense advantage in reach and his car-door-sized hands. He punched, he parried, and he tossed.