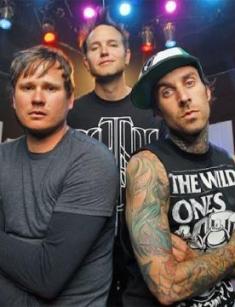 The guys have long started to conquer the audience, and up to now, they have released seven albums, each of which has its own twist in the form of a hit track.

The story of Blink-182 began in the 1990s. At first, they tried to make it under the name "Duck Tape," which was later changed to Blink. The number 182 in the title of the band appeared later, only in 1994, when after the release of the first full album of the same name the group from Ireland began to threaten the guys with a lawsuit if they did not change their name. According to the founders of Blink-182, the numbers at the end of the name were chosen randomly and had no explanation.

The creator of the team was Tom DeLonge, who was kicked out of school for drinking alcohol in the stands during a basketball game. The parents were forced to transfer their son to another school where he met Anne Hoppus, and she subsequently brought him together with her brother, Mark Hoppus.

With these two guys, the band began to form. Together, they invited Scott Raynor, who at that time was fourteen years old, to play the drums. In this composition, the band performed until 1998.

Trouble was waiting for the guys at a time when they just started to gain popularity. Because of the drummer's drinking problem, Raynor was forced to leave the guys. His decision to quit could also be explained by his desire to study at college, which he chose over performances.

Then the guys just went to concerts in America and could not remain without a drummer for long. After discussing everything together, the singers invited Travis Barker to take the place of Scott. Before that, the guy played in the band called The Aquabats, that's why he managed to quickly and easily replace the former drummer.

Despite a successful career, in 2005, the band went into "indefinite leave." The reason for this was the decision of Tom, who wanted to devote more time to his family and take a break from constant trips. Initially, they planned to take a break from work for six months; however, after that time, the lead singer refused to record songs.

Others described his actions as manipulation, and soon Hoppus found out that DeLonge had resigned. He informed only the manager of the band about that fact and changed his number.

The remaining members of Blink-182 decided not to take a new guitar player; each started a solo project. However, in 2009 they returned to the stage with the same line-up and started performing again. At the same time, the guys updated their website and logo.

Before, their hallmark was a smiling emoji with five arrows on the left side, and after the revival of the group, they added the sixth arrow to the image. After that, new performances and concerts filled the life of renewed members of the band.

In 2015, DeLonge expressed a desire to leave the team again. This time, the other participants did not try to change his mind, and soon found a replacement. It was Matt Skiba.

The first album released by the guys was called Flyswatter. More accurately, this was not an album, but a demo track, that they recorded on tape in the drummer's bedroom. As a result – the guys got a poor record, but still decided to replicate it, but created only 50 copies.

About the same "success" was the first performance of Blink-182. Since they had not yet reached the age of eighteen, they were allowed to stay in the bar where they were giving the concert, only during the performance, and then they had to leave the premises immediately. The guys had created 50 tickets for sale, but no one showed up to listen to the young musicians. Then the guys recorded another tape with their songs, but it was far from being called successful too.

The debut full-length album titled Cheshire Cat was released in 1994. The songs were recorded at Grilled Cheese Records, most of the tracks were reworked from songs from their second cassette.

Gradually, producers started noticing the guys and having seen their potential, record studios made offers of collaboration to Blink-182. And in 1996, the guys signed a contract with MCA. Later this company was renamed to Geffen Records.

The second album of the band was recorded two years after the first, but for the audience, it became available only in 1997. The record called Dude Ranch, produced by Mark Trombino was a great success. Two songs took a leading position in the American charts, and for some time remained there, and the guys, meanwhile, enjoyed the fruits of their work.

They were also preparing for the release of the new album for two years. However, the guys decided to hire a new producer Jerry Finn, who worked with MxPx and Rancid before them. After that, the man began to cooperate with the team regularly. Largely thanks to him the next record of Blink-182, Enema of the State, in 1999 was an incredible success.

Several songs became the band's most famous compositions, such as "All the Small Things," "Adam's Song" and "What's My Age Again." By the way, later, a music video was made on the last song, in which the band members run naked down the street.

The next album, Take off Your Pants and Jacket, released in 2001, continued the tradition of the previous one. After it came out and received positive reviews from the audience, the band decided to go on a tour of Europe. However, their plans did not come true, because due to the September terrorist attacks, the concerts had to be postponed to the next year.

But the second time the guys did not manage to please fans with live performances, because the lead singer of the team, Tom DeLonge had problems with his back.

Along with other artists and bands, in 2002 Blink-182 went on a tour called "Pop Disaster," in preparation for which DeLonge began to create solo material. Over time, it accumulated more and more, he called in the project of his drummer Barker and friend – guitarist David Kennedy. He and Anthony Celestino played bass. Jordan Pandik, Mark Hoppus and Tim Armstrong also took part in the recording of the songs. The result of this collaboration was a project called "Box Car Racer." After that, Barker was invited to another side project.

After the time spent on new projects, the guys came back to work together and started recording songs for the new album. In 2003 they released their fifth disc, which is called Blink-182. As noted by the audience, this time the tracks were calm and detached, however, this album had its hits, including the tracks "I Miss You," "Always" and "Feeling This."

Having released the record, at the end of the same year, the guys went on a small tour. It was different from the rest of their concerts because the cost of the tickets was law, which could not work but delight fans. Then the musicians went with the new songs on tour again, making the album the best-selling record of theirs. According to statistics, in the next six years after its release, more than five million copies were sold worldwide.

The band performed with the former line-up only in four years. In 2009, they shot a music video for the song "First Date." The release of the new album was scheduled for 2010, but the team could not meet these deadlines, a new album called "Neighborhoods" was released only in 2011. And in 2012 they had a tour of Europe.

The next time to please fans with new songs came much later. In particular, this was due to the replacement of the vocalist and guitarist in one person. Therefore, the seventh album was presented only in 2016. The CD called "California" was in the first position of the famous American chart. After that, the guys had a long California tour and further work ahead of them.

The band Blink-182 continues to develop a musical career. The musicians are preparing to release a new album and think that its release will be the beginning of a rebirth of the band after a period of "quiet."

On January 24, 2019, the young people presented the first song, which will be included on the eighth album. The name of the record remains a mystery, but the fans will probably find it out through the band's Instagram, which the guys run together and fill it up with photos as news about their creative life.