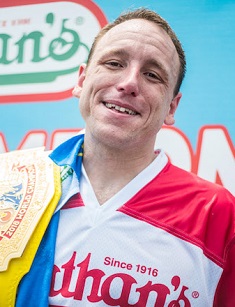 Joseph Christian Chestnut is a famous American competitive eater. He is also called the greatest eater is history among other competitors for taking the first position in the world by Major League Eating.

Joey Chestnut was born in Vallejo, California, USA. There is not much information about Joey Chestnut’s family. It's known that he was raised alone by his mother after his father left when he was just at the age of two. He has two sisters and three brothers, two of whom work as police officers.

In his interviews, Joey likes to express his love and respect for his family. He admits that his parents were a great support for him at the beginning of his career.

There is an opinion that after the separation of Joey’s parents, he started to have an unbelievable appetite for food. Joey’s mother had to raise her children alone, so she tried to work very hard to earn money for the family. She took up different jobs, including work as a waiter at a restaurant. With her small income, she did everything to bring up her kids, as she had to pay for Joey's education from middle school to high school. All in all, Chestnut entered San Jose State University and got a Bachelor of Engineering degree.

After working for a company, Joey left his main job in construction management to pursue a career of a full-time competitive eater.

Joey has to prepare his body for contests. His training routine for competitions includes a milk, protein and water diet which he uses to stretch his stomach. The “athlete” also runs three times a week as it helps to improve his breath control and his pacing.

Joey Chestnut is one of the greatest food eaters in the world. He has an impressive number of world records.

He started his career after announcing his arrival on the food eating contest stage with his win over the competitive eater Rich LeFevre. His breakout year wasn’t just going to be winning against LeFevre; Joey took it further by entering the Nathan’s Famous Fourth of July International Hot Dog Eating Contest.

In October of 2005, he set the first of what would later be a lot of world records at the World Grilled Cheese Eating Championship circuit by eating 32.5 grilled cheese sandwiches in 10 minutes. He quickly rose to become the rival of Takeru Kobayashi who had been the hot dog eating champion for a while. However, despite a good try, pushing Kobayashi to a new world record, Joey was unable to beat the reigning champion, losing to him both in the hot dog competition and the bratwurst contest.

In 2007, Joey finally succeeded to win Kobayashi. After a year that has started with wins in the Wing Bowl XV where he won by setting a record of 182 chicken wings in 30 minutes, he took his new challenge to his rival, Kobayashi. After a long battle of downing hot dogs, Chestnut narrowly handed Kobayashi his first loss in six years with 66-63 hot dogs. He rounded up the 2007 food competition season with a new world record at the World Hamburger Championship in Tennessee by eating 103 Krystal burgers in 8 minutes.

Joey is still a competitive eater and he’s competed every year since he graduated from college. His recent wins include a new hot dog world record in 2018 with 74 hot dogs at the Nathan’s Hot Dog Contest. The same year Joey Chestnut became more popular among the eaters for drinking 12 pints of beer in under 75 seconds in a New Year's Eve show that was held in Indianapolis.

In 2018, the best competitors in eating, including Joey Chestnut, demonstrated their skills at the World Hostess Donettes-eating Championship at the Barton Creek Square Mall in Austin. But Joey didn't manage to break his own record as he lost to Geoffrey Esper.

Chestnut holds 42 records in food-eating competitions. They include munching 141 hard-boiled eggs in eight minutes, eating 7.61 pounds of chicken wings in just 12 minutes, and many others.

In 2019, he received a twelfth title but failed to beat his record, eating 71 hot dogs.

In the summer of 2019, Fox News wrote about his rising popularity that caused a different response in public. After the release The Good, The Bad, The Hungry, a new documentary that came out in 2019, Joey received both positive and negative critics. Some of the viewers were excited to know more about a entertaining contest. However, some people have another attitude to it. Peter King, the former football writer for Sports Illustrated, addressed a message in his Twitter toward the eaters.

He expressed his opinion claiming that the organizers of such competitions spend too much money on food instead of donating it to poor children in America. In turn, the champion eater Chestnut spoke at his own expense naming Peter King a narrow-minded person. Joey added that it could be easy to criticize something and he said that eating contests actually use a “very small” amount of food and the organization Major League Eating donates to food banks around the country.

A present, the champion eater is known to be single. Although Joey proposed to his long-term girlfriend, Neslie Ricasa, in 2014, the couple was unable to make it to the altar. Joey and his wife broke up in 2015. He noted that the 2015 year was a real struggle to him, as he parted with his love and faced disability to win several contests.

Chestnut has a profile on Instagram with over 25,000 of followers and he has over 30,000 readers on Twitter, where he shares the latest news from his active life, and where all his contact information can be found.

Joey has made his salary from competition wins, and his fame has attracted endorsements and sponsorship from food-related brands. In the spring of 2019, he made an appearance on the opening of the supermarket chain Cub Foods.

Chestnut gets an annual income of around $200,000 from prize money, sponsorships and public appearances according to Forbes. As of 2019, his net worth is estimated at $900,000.