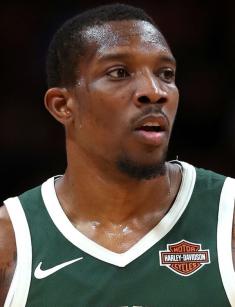 Eric Bledsoe’s sports career got started when he was a school student. Being a sports enthusiast from the childhood, Eric recorded high stats even being yet unexperienced player. And what accomplishments does he have to show off now? Let’s know!

Bledsoe’s birthplace is Alabama, the United States. Born to a middle-class family (which consisted of his single mother, Eric himself and his brother), future sports star had to take up odd jobs to help his mom to earn a living being a kid. From the infancy, Eric showed apparent interest in basketball, played the game with pals almost every day.

While at school, Bledsoe made on average 21.4 points, 12 assists and ten rebounds per match. Besides, he led his squad to numerous tournaments. In 2010 the sportsman was included in the list of the best basketball players performing on a point guard position.

Having enrolled at a university, Bledsoe joined its students’ sports team. As for his first year in the educational establishment, he registered 12 points, four rebounds, and three assists in 40 matches (he started 33 of them). His high stats brought the crew a 36-4 record. Also, he was credited by team’s NCCA championship appearance. In 5 games played during the competition, Bledsoe scored on average 16 points establishing a college record.

In 2010, Eric Bledsoe decided to take part in the NBA draft. While playing basketball in his college team, the sportsman evoked a scandal. So, professional experts noticed several mismatches in his school diploma. So, it was revealed Bledsoe’s mathematics grade had been changed to an A (from a C) to allow him to appear at state championships. However, the issue silenced soon.

In his times, Eric Bledsoe got a reputation of a fast and accurate sportsman. Having shown his excellent skills in the draft, the player got to the Oklahoma City Thunder. However, later the Los Angeles Clippers purchased Bledsoe. As for his debut year, he made on average 7 points and four assists. He was set as a starter in 30 matches. The following season, Bledsoe showed worse results.

In summer 2013 Bledsoe left the Clippers and joined the Phoenix Suns. In his first match with the crew - they faced the Portland Trail Blazers - Eric Bledsoe made 26 points, eight rebounds, and nine assists. Later, he helped the franchise beat the Utah Jazz with the score 89-83. In fall, the sportsman suffered a severe injury and was ruled out for several weeks. He came back to play in late November, scoring 18 points, seven rebounds, four steals and supplying the Suns with a 118-99 victory over the Jazz.

In the match against the Sacramento Kings, Bledsoe made 30 points and led his squad to a 109-93 victory. Having faced the Los Angeles Lakers, Bledsoe registered his debut double-double.

In December, Eric got injured again and had to miss a couple of months of playing. After his return, the sportsman faced the Boston Celtics and helped his squad defeat the opposer by recording 18 points and 13 rebounds.

In summer 2014 Eric Bledsoe became an official free agent. This measure evoked gossips the sportsman would leave the franchise. However, in September he was signed to the Suns after concluding a 5-year $68 million contract. Playing against the Lakers in October, the player registered 17 points, ten assists, and seven rebounds.

In December 2014, Bledsoe added the debut triple-double to the list of his accomplishments – it happened while fighting against the Clippers. Later, playing against the Dallas Mavericks, Eric made 17 points, 12 rebounds and 15 assists leading his franchise to 131-120 victory.

As for the season 2015, Bledsoe missed the majority of the year because of an injury. Without this precious player, the Suns succeeded to win opposers only in 12 matches in 3 months.

Bledsoe could perform again only in October 2016. So, he faced the Portland Trail Blazers and fought for his squad registering 21 points. Later, playing against the Denver Nuggets, Bledsoe astonished viewers by making 36 points – a really high result. December was marked by Eric’s 25 points and 12 assists in the match against the Philadelphia 76ers.

In fall 2017, after tweeting ‘I do not want to be here,’ Eric Bledsoe was misunderstood and had to leave to the franchise. Although he said this phrase was not dedicated to the Suns, its authorities fined the player and decided to trade him.

Subsequently, Eric Bledsoe began performing for the Milwaukee Bucks under No. 6 on his jersey.

His first day for the franchise was marked by 15 points and eight assists in the match against the San Antonio Spurs. In April 2018 the player made his 5th triple-double ever – he registered 21 points, 14 rebounds and 15 assists fighting against the Orlando Magic.

Eric Bledsoe’s net worth is evaluated at $60 million. As for his salary, it is increasing every year. His current pays are estimated at $15 million per year.

Speaking about Eric Bledsoe’s private life, he has a wife named Morgan Poole. The partners had been dating for two years, starting their relationship in 2015.

The sportsman is a father of two kids – son and a daughter.