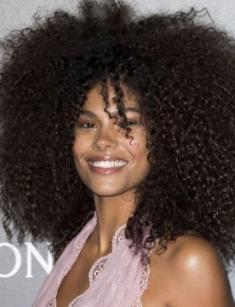 The exotic beauty’s first international appearance took place in 2017 when she participated in Jean Paul Gaultier show at Paris Fashion Week. Since that time, Tina Kunakey has been actively developing her modeling career. However, most people know her for the romance with the French actor Vincent Cassel.

Tina was born in Toulouse, France, on April 5, 1997. Her mother, Nadia, is Italian, and the father, Robin, came from Morocco and grew up in France.

“They met in Toulouse and immediately fell in love with each other”, said the model tenderly.

The young star adores her mother and views her a perfect woman; she also loves her strict father, who will always give a piece of good advice.

Tina, her brother, and sister grew up in a resort town, Biarritz. The children could see picturesque landscapes, ocean, and mountains. The girl spent much time at the seashore and surfed. She was also fond of swimming but had to quit the sport after trauma.

The parents tried to bring up their children by traveling: the family visited many places. Tina remembers that time with gratitude:

“Thanks to my parents, very young, I had the chance to travel and discover that not everyone has my chance and live in much more complicated conditions. These striking images opened my eyes forever”.

When Kunakey turned 15, the parents sent her to Madrid to study; although the teenager did not speak Spanish, she loved the capital with its eclectic architecture, fountains, and squares. She took her first steps in modeling in that city. Today, the celebrity considers Madrid to be her home; she is fluent in Spanish, too.

Tina went to her first auditions at the age of eight: the pretty little child was invited to a commercial, and she liked the experience. Kunakey used to work for Roxy, Billabong, and Quicksilver. However, the parents did not support the idea of early work, and the girl had to stop for a while.

When the beauty moved to Madrid, she continued to look for her place in modeling: she visited many auditions and sent her pictures to agencies. Soon, professionals noticed her unusual face and slim body (Tina’s height is 5.71 feet or 174 cm., and her weight is 121.25 lbs. or 55 kg.). Kunakey signed a contract with Mad Models Management in Barcelona and, later, with SUPA, Great Britain.

Tina could have remained one of a thousand models looking for their golden opportunity in agencies if it had not been for the accident: the French singer M. Pokora invited the gracious beauty to his music video “Belinda”. The premiere took place in October 2016 and went viral on the Internet; millions of people watched it.

According to the media, Tina Kunakey and Vincent Cassel met in 2015 on vacation. The 18-year-old model and 49-year-old actor talked for the whole evening; Cassel learned how old his companion was only the next day. Tina confessed she did not recognize the famous actor at that time: there was no television in her childhood, and she spent time at school or practicing sports.

The next day, Vincent invited Tina, her brother, and father for lunch; it was the first meeting with the lover’s family.

In August 2016, the couple went to Ibiza for vacation; the model’s picture with Vincent provoked many talks: fans were wondering what was going on behind the photo and whether the grey-bearded actor fell in love with the young girl.

The rumors were confirmed. On November 30, 2016, Vincent and Tina appeared at the Victoria's Secret show in Paris, holding hands. They were smiling radiantly; people had not seen the man so happy from the moment he divorced Monica Bellucci.

In November 2017, the relationship was threatened by the news: the paparazzi caught the model with the rapper A$AP Rocky in New York and speculated about the break-up. However, things ended up well. Later, Tina told Vogue Italy she was shooting for the singer’s music video, and it was a fascinating experience for her. In December, one could see Kunakey’s pictures from Rio: she was together with Cassel.

Today, Tina collaborates with European fashion houses, such as Dior and Louis Vuitton. The woman does not limit herself with modeling: she is going to try herself as an actress, and she has wonderful support.

The model’s personal life is also cloudless. In August 2018, the press reported the upcoming marriage, and the actor gave an interview to Vanity Fair; he shared his plans for the future. Tina said the man had proposed to her several months ago and surprised her:

“We had never talked about it before. I did not answer immediately because I did not expect it”.

The wedding ceremony took place in March 2018 in Bidart, France, where the model spent her childhood. Only the closest people were invited.

Tina and her husband travel a lot; one can see the couple’s current location on the model’s Instagram: she is a great fan of social networks.