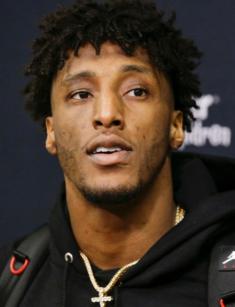 The Los Angeles native, Michael Thomas started his brilliant football career in NFL in 2016, as a rookie of New Orleans Saints. He is 212lb wide receiver. Thomas has established himself as an elite receiver with 321 catches for 3,787 yards and 23 touchdowns in his first three NFL seasons. As of 2019, he has a net worth of $4 million, including all of his properties and earnings. On July 31, 2019, Thomas became the highest-paid league’s wide receiver. He signed a five-year, $100 million contract extension with the Saints. His average annual salary was a new high for NFL receivers.

Michael’s birthplace was Los Angeles. He was born to his parents on March 3, 1993. He grew up in a football family. His uncle was Keyshawn Johnson. As a kid, Michael learned to catch a ball. However, he was not interested in the game at first. After Michael studied for a year at the Westlake Village Oaks Christian, he studied at home for a year too. Then he entered William Howard Taft Charter High School, where he was going to become a basketball player.

Thomas spent most of his free time training on the basketball court. He did everything that could help him to run faster and jump higher. The physical tools he was developing as a basketball player became the foundation on which he built his skill set as a wide receiver.

Then Thomas had fully grown to a height of above 6 feet, and that prompted his school coaches to recruit him to the football team. As a senior he spent the breakout football season, scored 86 catches, 1,656 receiving yards and 21 touchdowns. Feeling what it meant to dominate, Michael decided to develop his football skills. He started learning the game’s rules and his position’s nuances.

His stats immediately put colleges on high alert as scholarship offers began to flood in from various schools. However, he wanted to stay in a native state. He hoped to enter USC or UCLA. But when he didn’t receive their offers, Thomas decided to enter college preparatory military boarding school located in Fork Union. He was going to spend there a year in order to continue his football development. Michael didn’t have enough football practice there, and without hesitation, he agreed to the Ohio State’s offer.

In 2012, in his freshman year, he appeared in 11 games, catching just three passes for 22 yards. Soon Michael was suspended from the sport. The disappointment of not playing that season was what fired him up to make a comeback to the team, and the leading receiver on a national championship squad with 54 catches for 799 yards and nine touchdowns in 2014. Also, he helped his team to win CFP and Big Ten Championship that year.

In three years for Buckeyes, Thomas appeared in 139 games, made 113 receptions for 1602 yards, adding 19 touchdowns. At the beginning of 2016, he was described as the perfect possession receiver after winning the Fiesta Bowl. Soon he declared for NFL Draft and became the eighth Ohio State underclassman to announce an intention.

In 2016 Thomas wasn’t picked No. 1 overall like his uncle. He became a second-round draft pick (47th overall) of the New Orleans Saints. On May 9, 2016, rookie signed a four-year $5.11 million contract. Started his NFL career as a starting player, he didn’t lose his place during all of his rookie season. He debuted with six catches for 22 yards. Thomas became the best rookie receiver in Saints’ history by every metric.

The only thing Thomas did wrong on his record-setting day was forgetting about the historical implications. After the game, he swapped jerseys with Falcons star receiver Julio Jones. Then Thomas said:

"I didn't realize what I did. I broke every record with that jersey on. I got to get that back."

In 2017 season Thomas started as the major Saints receiver. That year he was named to his first All-Star roster, appeared in NFL playoffs and became the third in league’s stats for the total number of catches.

By the end of the season, he had been among the 80 best then NFL players. In September 2018 Thomas caught 38 of the 40 passes that were thrown at him, for a 95 percent catch rate, putting him on pace for an almost unbelievable 203 receptions for the season, a mark that obliterated then record of 143 single-season passes.

In 2018 Michael had an NFL-best 125 catches for 1,405 receiving yards and nine touchdowns. Over his first three seasons in the league, he scored 321 catches for 3,787 yards and 23 touchdowns. In February 2019, Thomas signed with a new agent, who became his attorney in negotiations with the Saints. The club didn't have the ability to exercise a fifth-year option on Thomas’ rookie contract.

In June 2019, Michael and the Saints were still far apart in new contract negotiations. Thomas wanted $22 million per season, while the Saints were angling for around $18 million. The same time he was traveling in Europe and didn’t make any noise about a potential holdout as he prepared for the final season of his rookie contract. Although the Saints were ready to make Thomas the highest-paid league’s wide receiver, they didn’t want to pay annual $22 million.

In July Thomas resorted to an ambiguous method, not reporting for the start of training camp. He didn't have to wait long to receive a long-term contract that kept him in New Orleans through 2024. On July 31 the sides agreed and signed a five-year contract extension worth up to $100 million. After his big deal, Thomas ended his six-day holdout and reported to training camp for the Saints. Michael reported he was determined to do everything he could to prove he earned his record-breaking contract extension.

Michael Thomas keeps his relationships in secret. If he has a girlfriend, he doesn’t want anyone to know her name. He doesn’t post pictures with women and doesn’t write about them on his Instagram, Twitter, or Facebook. That’s why there is a huge field for rumors. Fans and journalists report about his relationships with Saint cheerleading team members, such as Denee Johnson, Indya Bradley or Bailey Davis.

In March 2018 Thomas landed an endorsement deal with Jordan Brand. In July 2019, Michael signed a five year $96.25 million extension with the Saints and wrote his name to NFL record book as the highest-paid league’ receiver. Thomas got a $20 million signing bonus, $60.6 million guaranteed, and an average annual salary of $19.25 million.

The max value of the contract was $100 million if certain escalators were earned. As of 2019, the talented wide receiver had made huge wealth from his football career; Thomas had made $4.11 million over the first three seasons of his professional career.