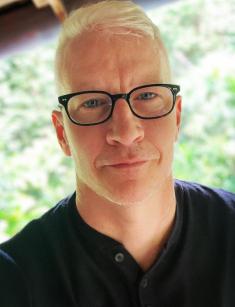 Anderson Hays Cooper, who was born on June 3, 1967, is a NY-native journalist, writer, and TV personality. He is better known for working with CNN and other channels on his projects, such as Anderson Cooper 360° and many others. He is the winner of many TV awards, including the Emmy, the Peabody, and the GLAAD Media Award.

Gloria Vanderbilt, an actress, and Wyatt Emory Cooper, a writer, gave birth to Anderson in New York City. When he was a little boy and legendary photographer Diane Arbus posed for Harper's Bazaar, he had his first experience in the media. Anderson made his television debut at the age of three and participated in the game program, To Tell the Truth at the age of nine. His father passed away in January 1978, following a series of heart attacks. During his childhood, Anderson attended the private Dalton School in Manhattan. After graduating from Yale University, he spent several years visiting places where, in his opinion, he could see the suffering that he felt on the inside since his older brother's suicide had been the catalyst for him to pursue journalism. He produced videos in the countries he visited for Channel One.

Anderson, a political science student, worked as an intern at the Central Intelligence Agency for two years while in college. He pursued journalism despite having no professional experience in the field.

Channel One was Anderson's first employer. He later worked as a fact-checker for Channel One, a tiny news organization that creates a news program targeted toward young people that is broadcast in many American middle and high schools. Interestingly, Anderson met with students protesting the Burmese government after entering Myanmar on his own with a bogus press pass. He eventually succeeded in selling Channel One his news pieces.

In 1995, he took a job as a correspondent for ABC News, and in 1999, he became co-host of World News Now. The following year, he was invited to work on the reality show "The Mole."

In 2001, Anderson left ABC and joined CNN, where he co-hosted American Morning with Paula Zahn. In 2002, he began working on CNN's weekend newscasts. Since September 2003, the journalist has been hosting his TV news program, Anderson Cooper 360°.

Anderson is openly gay. He dated his longtime partner, Benjamin Maisani until they broke up in 2018. Using a surrogate, he welcomed his first son in 2020. In 2022, he became a father for the second time.

Throughout his career, Anderson received many awards, and here are the most important of them: