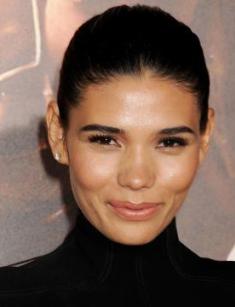 Karla Paloma Jiménez Denagustin was born on August 22, 1983, in Acapulco, Mexico, and spent her childhood and youth in the suburbs of the city. Paloma is Mexican, although, at the same time, she belongs to the mixed ethnic group.

At a very young age, Paloma linked her life with the modeling business. There is little information about her childhood. She emphasizes in interviews that she has achieved everything thanks to her strong independent nature.

Model Paloma Jiménez was first represented by ID Model Management in the United States. She later signed a contract with Look Models in Mexico.

Later, Paloma participated in various Mexican television shows. She became the sex symbol of 2004 when she appeared in the TV show Otro Rollo. During her modeling career, Paloma managed to appear on the covers of many fashion magazines.

Her pictures adorned the cover of the Mexican edition of Maxim in January 2005 and the August edition of Max in 2006. In addition to filming for fashion magazines and catalogs, the woman became popular, participating in international video and television commercials. In particular, she presents the products of such world famous brands as Pantene, Coca-Cola, Honda, and others.

Paloma walked on runways at European fashion shows and also presented clothing lines in Mexico for fashion designers such as:

Paloma played only one role in the cinematography. She performed a cameo role in the Mexican TV series Otro rollo con: Adal Ramones, which aired from 1995 to 2007.

Paloma Jiménez became truly famous after her love affair with the cult Hollywood actor, Vin Diesel, the rugged star of the blockbusters, The Fast and the Furious and The Chronicles of Riddick. Paloma has not told about her previous relationships, and it is evident that Vin Diesel is her real and only love at the moment.

The celebrities have told in a few interviews about their meeting. They got acquainted in 2007 at one of the secular parties.

According to the actor, he decided to flirt with a charming model that distinguished herself with a fragile figure and magnificent black hair. However, Paloma did not show much interest in The Fast and the Furious superhero, which only put fire into his heart. After being rejected, he had no choice but to start courting the unapproachable beautiful lady.

For a long time, only a few people knew about their torrid love affair. For one year, the couple managed to hide their relationship, until their first daughter, Hania Riley, was born in April 2008.

The happy father could cut the umbilical cord and later regretted that he was not allowed to attend the birth. He changed a lot thanks to Paloma, who gave birth to a charming daughter. The rugged daddy appeared in front of the paparazzi, showing affection to his daughter and satisfying her whims.

Little Hania has proved herself to be a worthy bearer of the family name. The fans of the celebrity couple were fascinated by the pictures, in which the four-year-old girl performs push-ups with excitement, imitating her dad and causing sincere affection of a happy family. The actor wrote on Instagram that he finally achieved the main goal in his life; he has become a loving and beloved father.

Two years later, in September 2010, Paloma and Vin Diesel had a son, Vincent Sinclair. The birth of the heir made him even happier and strengthened the relationship of the couple.

Before the birth of her son, Paloma tried not to appear in public. After that, she began attending social events more often; however, she does not come there that often. In general, people see her when she accompanies her husband, walking the red carpet during a film premiere.

The third child of the couple was born in March 2015. The girl was named Pauline Sinclair after Diesel's friend, who died in a car crash, Paul Walker. The loss of the close friend was a great tragedy for him. He admitted that the support of his wife helped him cope with that grief.

Since Paloma was pregnant, the creators of the seventh installment of The Fast and the Furious franchise had to postpone the release date of the project. The movie was scheduled to premiere on March 10. But the famous family was awaiting the birth of their baby at about the same time. Diesel decided to be with his wife at this crucial moment, and Sony Pictures studio changed the original plans, rescheduling the ceremony. So, instead of Abu Dhabi, the premiere was held in Los Angeles.

Just two weeks after the birth of her daughter, Paloma already posed for reporters at a solemn ceremony with her husband and children. Vin Diesel was honored to leave handprints on Hollywood Boulevard in Los Angeles.

People were shocked by the amazing figure of his wife. Numerous reporters mentioned that Paloma knew the secret method to get the perfect slim figure after childbirth quickly. After all, she looked as if she had not left the gym half a month after the birth of the third child.

The family lives in Vin Diesel’s house in Los Angeles, where Pamela managed to create a cozy and warm atmosphere. Moreover, she does everything on her own and does not have a maid.

She said in a few interviews that after the birth of children, her lover became a completely different person. He likes to spend more time with his family, giving it more priority than his work as an actor, director, and producer.

Despite the ten years of living together and three children, the couple has not married. Pamela continues to be the common-law wife of her famous partner, and it seems that this does not upset her at all. The celebrity family has proved that a truly loving relationship is more important than official vows and a piece of paper.

Nowadays, Paloma Jiménez has a net worth of $5 million.