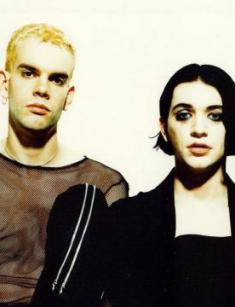 Placebo holds a special place in the world of British rock. For twenty years, the band has experienced with the sound, style, and genre so much that it created an army of fans with different tastes in rock'n'roll music. A separate category of fans loves musicians for their appeal to cover versions of famous rock hits from the idols of the past. Another component of success - the bright androgynous image of frontman Brian Molko, who never hid his bisexual orientation and drug addiction.

At first, there were two of them – a Britt with Scottish and Franco-Italian ancestry, Brian Molko, and a Swede, Stefan Olsdal. Fate brought musicians to the London underground. Brian invited Stefan to his performance, after which guys decided to unite for joint work.

Getting to know each other better, the young people realized that they had a lot in common: a passion for music, common idols – Nirvana, Sonic Youth, The Pixies, Smashing Pumpkins, commitment to the ideas of the LGBT movement. Even in the stories of their lives, there were similar facts: both graduated from a school in Luxembourg but did not see each other before the memorable meeting on the subway.

Their well-coordinated guitar-vocal duo needed a drummer; then Steve Hewitt joined the guys. With this line-up (Brian – vocals, guitar, Stefan – bass-guitar, Steve - drums) musicians in 1994 recorded several singles, calling the group Ashtray Heart. Since then and until 2007, the band was always a trio, which from time to time was joined by session members for concerts and tours.

"When we set up the band, we were unfashionable. Then Brit-pop was gaining momentum in London. We did not fit in any musical trend. Probably, people got interested because we were different. Although all this opposition to others was completely natural for us: we created Placebo just to express ourselves", - say the participants remembering the story of how the band was created.

For more than 20 years the band has only changed drummers. After recording the demo version of the debut album, Steve Hewitt was replaced by a Swede, Robert Schultzberg, an old friend of Stefan's. However, after he had left (Robert withstood fights with Brian all year), Hewitt came back to the band and played together with them for almost ten years, but in 2008 he left the band because of "personal and musical differences."

His place was taken by the former drummer of the American band Evaline, Steve Forrest. In 2015, he moved on to his musical project, and Matt Lunn, a former member of the group Colour of Fire, became a temporary drummer of Placebo. Out of the concert participants, it is worth noting the famous British guitarist and pianist Alex Lee, as well as violinist and keyboard player Fiona Brice.

The first thing the musicians started with was sending demos of their music to record companies. At the same time, the guys performed at different venues in the capital, and on January 23, 1995, their first concert was held in Covent Garden's Rock Garden. Soon the label Hut Records noticed the work of the guys and in January of 1996, the young people signed a contract with the recording company. In the summer, the label released its debut album, Placebo. The musicians took the same word to be their band's name.

The album was a great success in Britain, the singles "Nancy Boy" and "Bruise Pristine" became super hits. Subsequently, the album received gold status in England and France and again became platinum at home in 2013.

Having gone on a big tour in support of the album, in 1997 the rockers performed in the legendary New York's Madison Square Garden on the 50th anniversary of the legendary David Bowie, with whom they became friends a year earlier, opening the concert of the singer. Since then, the "father" of glam rock strongly encouraged the creativity of the guys, who surpassed the eccentricity of their mentor long ago.

The new trio won the attention of the public not only with the original music and unique vocals of the frontman but also with his appearance: Brian put on a lot of makeup, experimented with hairstyles and sported on the stage in a woman's dress. For such an extravagant behavior, at first, the boys gained fame as freaks. However, soon, fans were convinced that posing had nothing to do with it. Placebo was a way of life.

"I believe in the freedom of dressing. When it comes to expressing yourself through clothes, it doesn't matter what you wear. If you're comfortable in women's clothing, that's great. For example, a couple of centuries ago, men wore dresses, it was fashionable."- said Molko in an interview.

1998 brought the boys debut on the screen: musicians were featured in episodes of Todd Haynes' movie Velvet Goldmine, dedicated to glam rock. The main news was the release of the next album Without You I'm Nothing (October 12, 1998).

The single "Pure Morning" preceded the success of the album, holding the fourth place on the charts for a long time. The music video for the song was nominated for Brit Award-1999. The album, which gave the world hits "Every you every me," "Without You I'm Nothing," "You Don't Care About Us," sold over a million copies.

On October 9, 2000, Placebo presented the third album, Black Market Music, the content of which surprised fans with a tougher adrenaline sound mixed with rap. On this album, Molko collaborated with hip-hop musician, Justin Warfield. The tour to support the release for the first time included Russia – the band performed in Moscow on June 20, 2001.

After the third album full of experimentation, the group was gaining inspiration for almost three years and gave a new product on March 24, 2003. Their fourth album with a clear electronic sound, the rockers called Sleeping With Ghosts. The main track of the album was the song "Protect Me From What I Want," which Brian also performed in French ("Protege Moi").

This time, the musicians curiously approached marketing on September 22, 2003, a special version of the two-disc album was released. On the extra CD, the British provided 10 cover versions of hits of rock idols of the past – Kate Bush ("Running Up that Hill"), Sinéad O'Connor ("Jackie"), Serge Gainsbourg ("Holocaust"), The Pixies band ("Where Is My Mind?"), and Depeche Mode ("I Feel You").

"Our young fans have probably never even heard of such performers. If we can open the door for them to the world of this music, that's great. If people can come to The Pixies via Placebo, that's fantastic." - commented Molko on the release of the outstanding record.

"Meds" - under this name came out the fifth album in 2006. The record was successful and almost repeated the triumph of the first albums. Alison Mosshart from the band The Kills took part in the recording of the single under the same title. The song entered the top tracks, sounding on rock radio stations.

The single "Song To Say Goodbye," which the lead singer recorded under the impression of the trip to India, was no less popular. Experts and fans noted the changed atmosphere of the songs and associated it with the new status of the frontman - in 2005, Brian had a son Cody.

2009 was fruitful for the team. In addition to the new album, Battle for the Sun, and the traditional tour in its support, the musicians attempted to summarize the 15-year creative period and launch a full 10-disc collection of releases, which included all studio albums and collections of different years. In November, Placebo received the European MTV a\Award for Best Alternative Band.

The guys wrote the studio album "Loud Like Love" under the lucky number seven in 2012-2013. On September 16, 2013, the show Loud Like Love TV was posted on Youtube: ten tracks from the album and other hits were performed live on air.

In 2016, the musicians went on an anniversary tour "20 Years Of Placebo" dedicated to the 20th anniversary of the band. Brian and Stefan announced it in the spring, and in the summer on the TV show Evening Urgant they performed the song "Twenty Years," which was included in the mini-album Life's What You Make It.

In 2018, the creators of the group gave an interview to NME, in which they said that they are currently working on a new experimental album, which will be fundamentally different from the previous records.