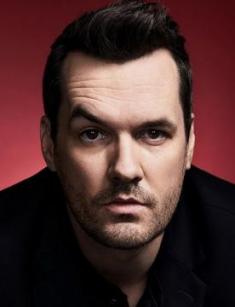 People can like and then adore the charismatic Australian comedian, Jim Jefferies, watching his performances. Firstly, they are scathing and discouraging truthful, although the shows can have locker-room jokes and dirty words. Secondly, their creator has a keen eye for the realities of everyday life. Thirdly, he has his own unsurpassed "trick." The man often performs with a glass of beer, emphasizing his unique style.

It seems that Jim Jefferies (Geoff James Nugent) was destined to attract attention and win the admiration of enthusiastic fans. The fact is that he was born on Valentine's Day in 1977.

The boy spent his childhood in Sydney, where his father first ran a carpentry business, but after he went bankrupt, the man began working as a repairman in an educational institution. His mother worked as a substitute teacher and often screamed at her pupils, which caused conflicts between Jim and his classmates.

Although his parents belonged to the middle class, in the 1960s, they managed to purchase a small house in the city borough, which later became one of the most prestigious parts. So according to the comedian, he was not a rich child but lived in a rich place on Turramurra Street. His best friends, Andrew and Daniel Connor, who had muscular dystrophy, lived next door. The comedian devoted the final speech of Jim Jefferies Alcoholocaust to them, and especially their meeting with the girls of easy virtue in Melbourne.

Jim told in an interview that he loved to play in musicals, in which he always got funny roles. In high school, he was terribly shy and could not speak to girls. When he grew up, the teenager became interested in comedy, rugby, Monty Python, and the Beatles. The turning point was the performance of Eddie Murphy, who told funny and interesting stories about his childhood.

The parents pushed Jim to start working early. He first got a newspaper distribution job and then worked at the McDonalds. Later, the young man moved to Perth, where he entered the Western Australian Academy of Performing Arts. A few months before completing his degree, Jim left the university and began his stand-up comedy career, relocating initially to Sydney and then to the UK.

During his stand-up performances, the man often touched upon the family themes. For example, he began the show, complaining about his 15-year-old niece who managed to get pregnant, despite the lessons about puberty twice a week. “I think, too much information. ... just start showing these kids pornography, from a very young age,” he said. One day, he told about a long-lived grandmother from Queensland.

At the beginning of his career that made him world-famous, Jefferies created stand-up performances using short-form jokes. Then he moved to anecdotal humor and began doing hour-long sets.

His stand-up concert at the Manchester Comedy Club attracted attention because Jim was attacked onstage by a spectator. Footage of the incident was included in his debut DVD, Contraband Live, in which the comedian explained the causes of injuries and traced through the series of events. He also spoke about the reaction of his colleagues behind the scenes.

In the United States, he became famous in 2009, after his debut HBO special, I Swear to God. Jim's credentials include all sorts of large-scale comic festivals, television shows, radio programs, the podcast together with a friend, Eddie Ifft. He eventually had to abandon the last project due to the shooting of the autobiographical film series Legit. The TV show was released on January 17, 2013, became popular with viewers, but was closed after two seasons.

By 2019, the Australian comedian had starred in 3 full-length films (Me and My Mates vs the Zombie Apocalypse, Punching Henry, and Killing Hasselhoff) and created eight stand-up specials (Freedumb (Gun Control), Fully Functional and others.).

There are no taboo topics for Jim. He speaks freely about politics, people with disabilities, early pregnancies, sexual minorities, religion, family, alcoholism, drug addiction, pedophilia. He can easily combine all themes mentioned above in one wild cocktail, or rather, a performance that his fans can quote. The has also touched upon his personal life. Moreover, he has told not only about past relationships, but also the present ones.

On November 7, 2012, Hollywood actress Kate Luyben (Shanghai Noon, Intolerable Cruelty, The 40 Year Old Virgin) and Jefferies had the only son, Hank, whom the father adored.

“That first three months of the new boyfriend or girlfriend, the new relationship, where the person’s fucking perfect. And you’re like, “Oh, my God… I love this person. Cause women can hold the psycho down for three months. So I went from the new girlfriend, best feeling in the world, to dating a pregnant chick. But the pregnant are the worst people on Earth,” Jim joked.

And he also said that Kate became pregnant six weeks after they met.

Nowadays, Jim continues to make people laugh every Tuesday in the late-night talk show of the same name on Comedy Central. The third season premiered on March 19, 2019. A year earlier, in 2018, the long-awaited special, This is Me Now, was released.

On the official website of the comedian, fans can find out about the upcoming concerts and watch the video archive, as well as find the necessary contacts and links. As for social media, the man has Instagram and Twitter pages, where he shares new photos, and there is his official community group on Facebook.

Jim Jefferies has a net worth of $9 million.