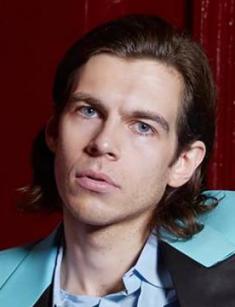 James Righton is the founder and vocalist of the British indie rock group Klaxons. The band formed in 2005 and split up in 2014; they gave the last concerts supporting the new album and ceased to exist. Since that time, James Righton has been developing his career as a solo artist Shock Machine.

The future musician was born on August 25, 1983, in Stratford-upon-Avon, the home town of William Shakespeare.

There is little information about the singer’s childhood. James’s father was a musician, and his son followed in his footsteps: he graduated from a music school and devoted his life to the stage.

As soon as Righton finished school, he continued his education at Cardiff University and studied Politics and Spanish for a couple of months. However, he decided to move to Madrid. The young man met Simon Taylor-Davis there, and the artists founded the group Klaxons.

The Klaxons members came forward as a groundbreaking rock group from the first track. Their star shone brightly and mesmerized music lovers, critics, and colleagues. Muse invited them to collaborate, and BBC DJs were eager to interview Klaxons.

The band’s music genre could hardly be determined. Eventually, the young men cooked the term “new rave”; they did not expect it to become the actual name of the new genre.

In 2006, the musicians recorded the debuting single “Gravity’s Rainbow”. The BBC DJ Steve Lamacq got one of its 500 copies and broadcast it on the radio. In a blink of an eye, New Musical Express magazine sang the praises to Klaxons, and Polydor Records that had taken care of The Beatles invited a contract. The artists signed the agreement and presented the new track, “Atlantis To Interzone”; they started giving a lot of concerts.

The debuting album, Myths of the Near Future, consisted of hits and appeared in 2007. Critics unanimously called it the best release of the year and gave the group the NME Awards for Best New Band.

Six months later, in July 2007, Klaxons announced the work on the second album; fans had to wait three years. Righton and his colleagues also released new songs at that period: “Valley of the Calm Trees”, “Moonhead”, “Imaginary Pleasures”, and “In Silver Forest”.

The album was postponed, though: by March 2009, a part of the material had to be re-recorded because the label believed its sounding was too rough. Thus, Surfing The Void came out in August 2010.

The third disc, Love Frequency, was released in June 2014. Not only had the number of the group’s fans decreased, but the genre changes shocked people. It was nothing like the previous albums: indie rock transformed into indie pop, and punk funk was forgotten. The third work was the lightest and most electronic one: unsophisticated tunes were accompanied by James’s clear, sweet voice. After the album failed, Klaxons split up, and Righton began his solo project, Shock Machine.

Journalists paid attention to the British musician’s personal life when the rumors about his romance with the actress Keira Knightley appeared.

The couple met in 2011 at a party. Later, Keira confessed to journalists she had not even heard about the group Klaxons at that time and did not know who James Righton was. Still, this fact did not prevent the musician from conquering Knightley’s heart.

The young people had much in common: they watched soccer matches after work, had lunch in a café, and rested on the grass in London parks. Keira did not think about that relationship much: she just enjoyed the good time together.

Three months later, the singer showed his intentions were serious. When the actress’s brother, Caleb, married, Keira mentioned she was going to the wedding ceremony, and James told her he would like to accompany her there. The vocalist was not afraid of meeting the whole family of his girlfriend.

Righton’s proposal was a surprise for Keira. She did not want to get married, as it had been with her previous partner, Rupert Friend. However, the musician got the long-awaited “yes”.

The wedding took place in 2013 in southern France, where the actress had her own house. It was a chamber ceremony: only eleven guests were invited. Instead of having a luxurious dress, Knightley preferred the tender Chanel dress that she had worn in 2008 on a red carpet.

A couple of months later, the press started talking about Keira’s probable pregnancy; the spouses gave no comments. James took care of his wife and her emotional health. Whenever journalists asked him about a child, he would change the subject immediately.

Besides, the actress did not see herself as a mother and felt nervous about childbirth. The household troubles were the last straw: the lovers were preparing a baby room for a long time.

Despite all the ordeals, James and Keira’s daughter Edie was born on May 25, 2015. The celebrities did not reveal the child’s sex for a couple of months, but the paparazzi managed to take a picture of the happy family. By now, Righton and Knightley are not going to have another baby.

In August 2017, the former frontman of Klaxons presented the debuting album of his solo project, Shock Machine. The disc consisted of ten tracks; both critics and ordinary listeners appreciated it. The music videos “Unlimited Love”, “Open Up The Sky”, “Lost in the Mystery”, and “Let Her Love In” came out.

Today, Keira Knightley’s husband records new hits and gives concerts all over the globe. He shares pictures from his shows and studio photos on Instagram.