Mike Sorrentino (a.k.a The Situation) 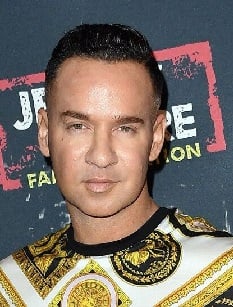 Mike Sorrentino (a.k.a The Situation): biography

Michael Sorrentino is a famous American television personality mostly known for starring on all six seasons of the MTV reality show Jersey Shore, from 2009 through 2012. In his life, he has evoked several scandals and even spent 8 months in jail. It’s high time for us to read Mike Sorrentino’s biography!

Michael Sorrentino was born on July 4, 1981, in the New York City borough of Staten Island. As a baby, he lived in Manalapan Township, New Jersey. As for Mike Sorrentino's education, initially he got his degree in Brookdale Community College, later – enrolled at Kean University and Monmouth University.

Sorrentino has a nickname "The Situation" which he gained when a girl complimented his abs while walking with her boyfriend on a beach in New Jersey. That girl's boyfriend was angered by her liking another man, and Mike's friend noted that his abs were causing a "situation," or a problem between the two.

Before fame, Mike Sorrentino served as an assistant manager of a fitness center in Staten Island. At the age of 25, he was fired and started an underwear model career. Besides, he became involved in real estate business during this time.

Sorrentino is not the only child in his family – he has two elder brothers Maximo and Marc, and a younger sister named Melissa, who starred as a bride in Say Yes to the Dress. Marc also works as Mike's manager and partner in MPS Entertainment, LLC, and Situation Nation, Inc.

Mike Sorrentino's television career started in 2009 when he appeared on Jersey Shore. He worked on the show till 2012. Later, the celebrity has been invited to various TV series, such as The Howard Stern Show, The Tonight Show with Conan O'Brien, The Jay Leno Show, Lopez Tonight, SportsNation, Chelsea Lately, The Ellen DeGeneres Show, and Conan.

Also, The Situation took part in Dancing with the Stars, Season 11. Paired with Karina Smirnoff, Sorrentino left the show on the 4th week.

2010 was marked by Mike Sorrentino's appearance with Bristol Palin in a public service announcement for The Candie's Foundation. It was a part of Pause Before You Play campaign to prevent teenagers from pregnancy.

At the beginning of 2011, Sorrentino started working as a judge in the YOBI.tv talent-show web series New Stage.

Totally, in 2010, the celebrity managed to make more than $5 million – this sum is the second highest of any other reality star after Kim Kardashian. He got the money through signing endorsement deals with Devotion Vodka, Reebok Zigtech shoes, a rap song, a workout DVD, a vitamin line for GNC, a clothing line, and appearances on Jersey Shore and Dancing with the Stars.

2011 brought the star role of Donald Trump on the Comedy Central Roast. Sorrentino's jokes were bad, and the audience began jeering him.

In summer, Mike Sorrentino was offered ten thousand dollars by fashion retailer Abercrombie & Fitch not to wear the company's clothes. According to a spokesman, the reason for this offer was that Sorrentino could cause significant damage to the brand's image. That year, The Situation accused A&F of making shirts which read "The Fitchuation" and "GTL...You Know The Deal."

On February 22, 2012, Mike Sorrentino was seen playing a small cameo role on ABC's Suburgatory. Several months later, he appeared in Fox's dating game show The Choice. In August, fans could see Sorrentino on the tenth series of Celebrity Big Brother on Channel 5.

In October 2012, he appeared in a PETA ad campaign promoting the spaying and neutering of pets.

Two years later, The Situation took part in a reality show with his family. The show premiered on the TVGN network. In 2015, Sorrentino appeared in the fifth season of Marriage Boot Camp: Reality Stars with his partner, Lauren Pesce.

2016 was marked by Sorrentino's appearance on the 9th season of Worst Cooks in America. The next year, he added We TV's Marriage Boot Camp: Reality Stars Family Edition to the list of projects he has appeared in. He starred there alongside his brothers Marc and Maximo Sorrentino.

In 2018, alongside his former colleagues, Sorrentino appeared in Jersey Shore: Family Vacation. In the first and second seasons which premiered in 2018, Mike Sorrentino played the central role. It was announced in May 2019 that The Situation would "be a huge part" of the third season, including documentation of his wedding, court sentencing, and events leading up to his jail time.

Mike Sorrentino’s net worth is evaluated at $10 million.

Mike Sorrentino has a wife. In 2018 Sorrentino proposed to his new fiancee and longtime girlfriend, Lauren Pesce. Over the years, the tro have often quarreled, parted ways and reunited again. They were college sweethearts and split up before the original Jersey Shore show. They reunited in 2012.

On March 21, 2012, Mike Sorrentino confirmed that he had checked himself into rehab "to get control of a prescription medication problem" he had with oxycodone. He checked out of the Cirque Lodge treatment center in Utah on April 4, 2012.

On June 17, 2014, Mike "The Situation" Sorrentino was arrested at his tanning salon after a fight with his brother Frank.

Also, in 2018 Mike "The Situation" Sorrentino was accused of tax evasion and he ended up with a prison sentence of 8 months.

Sorrentino pleaded guilty to failing to pay taxes on more than $9 million in income. Sorrentino's brother Marc Sorrentino also pleaded guilty, admitting to one count of aiding in the preparation of a fraudulent tax return.