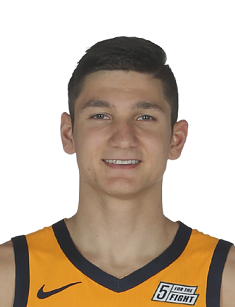 Born in Jacksonville, Grayson Allen started a basketball career in NBA in 2018, as a rookie of Utah Jazz. He won national championships as a player of Providence School and the Duke Blue Devils. Allen was playing for Jazz for a season. In summer 2019 he joined the Memphis Grizzlies. He plays at a shooting guard position. Grayson has a net worth of $2 million, including all of his properties and earnings.

In 2014 Allen enrolled at Duke University, where he joined Blue Devils, then four-time NCAA championship winners. In his freshman season, Allen became one of the main reasons of Duke’s fifth championship win. He was one of the heartthrobs of the country then, and people from all ethnicity and nationality enjoyed his game.

In season 2015-16 Allen was the best offensive player of Duke. He scored 21 points on average per game. At the end of the season, three different associations included him to the First, Second and Third-teams All-American. Meanwhile, Grayson earned a reputation as a dirty player during his college days. NBA scouts noticed him in high school when he first started tripping people. In college, he had a lot of incidents too.

Once Duke suspended Allen indefinitely after the guard intentionally stuck out his leg and tripped an Elon player, an incident he later apologized for. In 2017 he was one of the most disliked players in college basketball after a series of tripping incidents and meltdowns during games. However, he decided to return for his senior season at Duke.

In 2018 Allen declared for NBA Draft. Some critics expressed opinions that Allen became the first player on earth who had successfully tripped his way to the NBA. They said that it was not necessary to be good at basketball to get to the league. But it was enough to be able to shut off the opponent.

However, Allen’s college stats spoke for themselves. He played in 142 games in his Duke career and made 97 starts. He owned career averages of 14.1 points, 3.2 rebounds and 3.0 assists, completed his college career with 1,996 points to rank 12th on the Blue Devils’ career scoring list and seventh on the program’s career free throw percentage list.

In 2018 Draft class Allen was one of the best-known villains coming out of college basketball. He was selected with the 21st overall pick in the first round by Utah Jazz. In his interview, Grayson said that he didn’t think that would take long for him to change hearts and minds in the Jazz fanbase. On July 2 Allen signed a two-year $4.5 million contract with Utah.

Grayson became a controversial pick for the Jazz. Fans were disappointed by the Jazz’s choice and called their draft the worst in the history of the sport. When Grayson played in Summer League, there were some things he showed that was surprising and a little disappointing. Allen had done well with the shooting drills. What Allen showed that was surprising was a legit ability to pass the ball and create for teammates.

Allen was a better passer than it was expected. He was considered to become a legitimate backup point guard in the league. The other thing that Allen did better than expected was rebound the ball. Allen had a knack for the ball, and there were a few games where he would fight for boards and get them.

Allen made his NBA debut in a game against Grizzlies. He scored 7 points, played 11 minutes. In a season he appeared in 38 games (two starts). His stats were 5.6 points in 10.9 minutes per game. He also started all 12 of his NBA G League appearances with the Salt Lake City Stars and averaged 16.3 points, 2.7 rebounds, and 2.4 assists in 30.6 minutes.

In his rookie season, Allen showed that he could play with ferocity on the court. Sometimes it was too much, and he got out of control. Multiple times Allen came into the game and immediately picked up fouls, some of them bad ones that killed momentum or created points for the opposing team.

On July 6, 2019, the Grizzlies announced that the team had acquired Grayson Allen as a part of a big deal. And if the Grizzlies’ fans hoped that Allen would change his behavior in Memphis, they were disappointed in two weeks after his trade. On July 12, Grayson was ejected from an NBA Summer League game after committing two flagrant fouls within seconds of each other.

Allen committed both fouls against Celtics rookie Grant Williams, who led Boston with 21 points in its 113-87 win. After he missed two foul shots in the fourth quarter, Allen set up on defense. He was then seen pushing Williams from behind after Williams attempted to set a screen on him. The referee issued Allen his first flagrant foul for unnecessary contact.

After Williams shot two foul shots resulting from Allen’s transgression, Boston set up a play in which Williams again screened Allen under the basket to open himself up. As Williams went up for the shot, Allen turned and hit him from behind. Allen appeared confused by the call, saying, “That’s the ball.” Williams, who told reporters he was laughing at the incident “a little bit,” was smiling after the second foul and appeared unfazed.

Grayson had love relationships with Bailey Bunnell for five years. The couple had been dating since 2013, one year before Allen burst onto the national stage as a freshman with the Blue Devils. They met while they were students high school. But the pair broke up in 2018.

Grayson entered the NBA season with one of the biggest catches of the free agent girlfriends in the US, Instagram star Morgan Reid. She posted some pictures with Allen on an IG story wishing him a happy birthday. It led to speculation that the pair were dating.

In 2016 Deadspin tweeted a funny joke about then-Duke star Allen. Among the sports and college basketball community, there was popular a joke that Former Republican presidential candidate and politician Ted Cruz and Grayson Allen had a striking resemblance. If you want to make sure, try to find their comparison on the Internet.