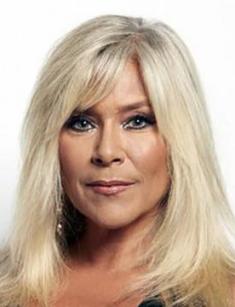 The British pop star Samantha Fox earned her popularity thanks to her charisma and remarkable breasts. Her modeling career was bright but short-term; as for the music activities, Fox continues to perform today. Sometimes, the musician is confused with the American pornographic actress Samantha Fox.

Samantha Karen Fox was born on April 15, 1966, and grew up in a working neighborhood of London. Her mother, Carole Ann Wilken, used to be a musician but finished her career for the family; the father’s name was Patrick John Fox. The parents divorced, and Sam and her younger sister Vanessa stayed with their mother. Further on, Patrick married again and had two more daughters.

Samantha appeared on the stage for the first time at three and began to study acting at five; she attended the Anna Scher Theatre School and, later, the Judi Dench Mountview Theatre School. The TV debut took place when Fox was ten: she participated in a BBC play. 14-year-old Sam founded a music group and started singing; the band recorded their debuting disc in 1981.

Samantha’s beauty was appreciated: she won the beginning model contest Face & Shape of 1983 and received the invitation to the photo shoot for The Sun. The British tabloid posted topless pictures of young women. It was necessary for the family to get out of poverty, and the 17-year-old model’s photo was published on the third page of the newspaper.

In the 1980s, the beauty industry could not use breast implants to correct breast shapes; the young woman’s natural sizes ignited men’s imagination. Nude posters of Samantha appeared in teenagers’ rooms far beyond Great Britain; the blonde’s breasts were insured for £250 000.

As soon as the woman became the sex symbol of the epoch, she came back to music and recorded the single “Touch Me”; it topped English and American charts at once. The next three years brought three hit albums: it was a tremendous success. The star toured not only in English-speaking countries but also Eastern Europe and the CIS countries.

In 1991, Fox presented the album Just One Night: the early tracks received the new pop-rock arrangement, and people gladly danced to them. The songs “Nothing's Gonna Stop Me Now” and “I Only Wanna Be with You” were the greatest hits.

Initially, Sam’s father promoted his daughter’s albums, but they canceled the collaboration in 1991 with a scandal: the singer suspected Patrick of stealing a million of pounds and even took a part of this sum in the court. The man died in 2000; the celebrity never made amends with him.

In 1995, the Samantha and the group Sox participated in the qualifying tour of Eurovision. The song “Go for the Heart” took only the fourth place, and the artist realized it was necessary to strengthen her positions. The model came back to the third page of The Sun to congratulate the tabloid with the 25th anniversary. To the audience’s excitement, the newspaper began to publish the pop diva’s topless pictures every week; the last photo of the series occupied the whole spread.

In October 1996, Playboy also printed the celebrity’s naked photos. From that moment, Samantha did not have any nude photo shoots: she had already earned enough money to continue her music career. In the late 1990s and early 2000s, Fox had several dance albums released; Angel with an Attitude is the most recent disc by now.

Samantha’s bisexuality made her personal life complicated. At 20, the young woman believed she would spend the whole life with the Australian criminal Peter Foster. The couple was going to marry twice, in 1987 and 1994, but nothing worked out. Perhaps, the tragedy caused the break-up: Peter and Samantha lost their adopted son who accidentally confused bottles and poisoned himself with alcohol.

In 1999, Fox was a jury member at a lesbian beauty pageant; rumors had it she was dating the musician Cris Bonacci. However, the celebrity came out with her love for a woman only in 2003. Myra Stratton was her true love; the couple spent 16 years together and planned to get married in 2009. However, this union did not happen as well.

In summer 2015, Stratton died of oncology; she had been fighting it for two years. Sam lost the closest person in her life: Myra was her best friend and personal manager. The mother comforted her daughter, and Samantha got back to life. The next year, the media reported the celebrity had another romance with a woman; her identity remained secret.

Today, Samantha Fox continues to develop her music career: she records covers of popular songs and even gives concerts.

For example, she had a tour in Russia at the end of 2017; the shows in Moscow and St. Petersburg were sold out. Many visitors came to remember their youth and listen to the songs of the old good days.