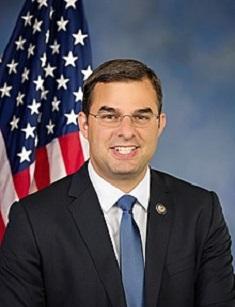 Justin Amash is an American lawyer and politician serving as the U.S. Representative for Michigan's 3rd congressional district since 2011. After being a member of the Republican Party, Amash announced on July 4, 2019, that he decided to leave the GOP to become an independent.

Justin Amash was born in Grand Rapids, Michigan, U.S. He is of Palestinian Arab ethnicity.

His mother, Mimi Amash, got acquainted with his father, Attallah Amash, through family friends in Damascus. His parents married in 1974.

Amash grew up in Kentwood, Michigan. Firstly, he attended Kelloggsville Christian School in Kelloggsville and after that he graduated from Grand Rapids Christian High School. In 2002, he got his education at the University of Michigan with a B.A. in economics with high honors. In 2005, he received a J.D. from the University of Michigan Law School.

After graduating from the law school, Amash worked as an attorney at the Grand Rapids law firm Varnum. He also was a corporate attorney for his family's business. He and his two brothers share ownership of their business in China.

In 2008, Amash ran for the Michigan House of Representatives in Michigan's 72nd House District. He donated to the campaigns of Congressman Ron Paul and John McCain. In the Republican primary, Amash won a five-way election defeating opponent Ken Yonker. In the general election, Amash overtook Democrat Albert Abbasse.

During his initial tenure in the State House, he sponsored five resolutions and twelve bills. However, none of them was accepted.

In August, 2010, the politician won the five-way Republican primary for the seat vacated by retiring Republican Vern Ehlers. He received support from the Club for Growth, Ron Paul, and FreedomWorks PAC during his primary campaign.

In Autumn issue of Time magazine, he was called one of its 40 under 40 – Rising Stars of U.S. Politics. Another interesting fact is that at age 30 Amash appeared to be the youngest federal office holder in the United States.

In 2014, he decided to participate in reelection to the House of Representatives.

After he defeated Ellis in the August primary, Amash started to criticize Ellis and former Congressman Pete Hoekstra. Amash called Hoekstra "a disgrace" saying that he was glad to see their losses. Amash objected to one of Ellis's TV advertisements in which California Republican Congressman Devin Nunes named Amash "Al Qaeda's best friend in Congress." Amash couldn't stand these words and demanded an apology from Ellis. He didn't want to be silent after the appearing of that offending campaign.

In 2018, the politician won reelection to the U.S. House for his fifth term, defeating Cathy Albro. Amash was unopposed in the Republican primary.

He made a speech criticizing the U.S. Environmental Protection Agency. From his point of view, too much money is spent on many environmental regulations.

Amash is a supporter of decreasing U.S. military spending. In 2011, he was one of six members of Congress who voted against House Resolution 268 reaffirming U.S. commitment to a negotiated settlement of the Israeli–Palestinian conflict through direct Israeli–Palestinian negotiation.

In July 2017, Justin Amash appeared to be one of only three House members who voted against a bill that imposed new economic sanctions against Russia, Iran, and North Korea.

In May, 2017, he stood for passing a revised version of the American Health Care Act.

Amash spoke about his attitude to the Defense of Marriage Act. He said that it could become a real danger to traditional marriage and voted against the Act.

In spring of 2018, Ben Shapiro, an American conservative political commentator, spoke with Justin Amash about President Trump invoking emergency powers to build the wall between the countries. The interview caused various controversies.

In 2019, Amash signed a letter to President Trump that contained his opinion on Trump's politics. Justin expressed his point of view on using the force that, in his opinion, went beyond congressional authorization. He noted that he hoped to see the end of arms in the future. He also mentioned the importance of finding the political solution to their involvement in Afghanistan.

The politician made comments on the Mueller Report. In May 2019, Amash noted that Trump "has engaged in impeachable conduct" based on the obstruction of justice findings of the Mueller Report. He was the first Republican member of Congress to call for Trump's impeachment. In response, Trump called Amash a "loser." In spite of this, Justin Amash was supported by the majority of his constituents during a town hall meeting which was held after his comments on impeachment.

There was another challenger in the Republican primary: Army National Guard member Thomas Norton, who announced his candidacy in April.

On July 4, 2019, Amash came out with the announcement in a Washington Post about his departure. He decided to leave the Republican Party to become an independent. He did such an act because he felt that partisan politics had become very overpowering. Justin claimed that It led to the situation when Congress stopped functioning as an independent legislative body. After that, he gave an exclusive interview in which he mentioned what led up to this action and discussed his future plans.

It caused a mixed reaction in the media and became one of the main topics to discuss. In summer, 2019, Bill Maher, an American comedian and political commentator of the HBO's Real Time talk show, expressed his reaction to what was happening, saying that a Republican like Justin Amash made a more principled case for impeachment than the Democratic Party.

Justin Amash is married to Kara Janell Day. Amash and his wife attended high school together, and later married after he graduated from Michigan and she graduated from Calvin College. They practices Orthodox Christian religion. The couple has three children: two daughters and a son. The family lives in Cascade Charter Township.

His main office is located in Washington DC and two district offices take place in Michigan.