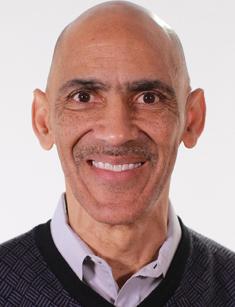 Tony Dungy is a former professional football player and coach, best known for his tenure as head coach of the Indianapolis Colts from 2002 to 2008. During his time with the Colts, Dungy led the team to seven playoff appearances, including a Super Bowl victory in 2007.

Tony Dungy was born in Jackson, Michigan on October 6, 1955. He was the youngest of four children and grew up in a middle-class family. His father Wilbur was a science professor and his mother Cleomae was a schoolteacher. From a young age, Tony had a passion for sports, particularly football. He began playing the game in grade school and quickly developed a reputation as a talented player.

In high school, Dungy was a star player on the football team. He was known for his intelligence, leadership, and work ethic, and he received numerous accolades for his performance on the field. After graduating from high school, he received a scholarship to play football at the University of Minnesota.

At Minnesota, Dungy continued to excel as a player. He was a starting defensive back for the Golden Gophers and was known for his intelligence and leadership skills. He also earned a degree in child psychology while attending college. After graduating from Minnesota, he was drafted by the Pittsburgh Steelers, where he played for three seasons as a defensive back.

Tony Dungy's NFL career began as a player in 1977 when he was drafted by the Pittsburgh Steelers as a defensive back. He played for the Steelers for three seasons before moving on to play for the San Francisco 49ers for one season. After retiring as a player in 1977, Dungy began his coaching career as an assistant coach for the Steelers. He later served as an assistant coach for the Kansas City Chiefs before being hired as the head coach of the Tampa Bay Buccaneers in 1996. He led the team to their first playoff appearance in 15 years during his tenure.

In 2002, Dungy was hired as the head coach of the Indianapolis Colts, where he led the team to seven playoff appearances and a Super Bowl victory in 2007. During his tenure, Dungy was known for his leadership and ability to build a winning culture within the team. He was also the first African American head coach to win a Super Bowl.

Dungy retired from coaching in 2008 and joined NBC Sports as a commentator. He is also a respected analyst and commentator on the NFL and has worked as an analyst for various media outlets. Dungy's contributions to the NFL as a coach and commentator have been significant and his legacy will be remembered for a long time.

Tony Dungy is a devout Christian and has been open about his faith throughout his career. He is an active member of the community and has been involved in various philanthropic and charitable endeavors. In addition to his success on the field, Dungy is also known for his philanthropy and community service, including his work with the Dungy Family Foundation and his involvement with All Pro Dad, a program that encourages fathers to be more involved in their children's lives.

Dungy is also a prolific author and has written several books, including "The Mentor Leader: Secrets to Building People and Teams That Win Consistently" and "Quiet Strength: The Principles, Practices & Priorities of a Winning Life" which is a best-seller.

Tony Dungy has accomplished a lot throughout his career as a professional football player and coach. Some of his notable accomplishments include: