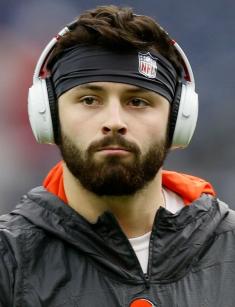 Baker Mayfield is an American quarterback who is currently playing for the Cleveland Browns. He debuted in the NFL in 2018 but already recommended himself as a valuable asset for the team.

The future athlete was born in spring 1995 in Texas. His dad used to play football for Houston and then became a private equity consultant. However, the man’s career did not run smoothly and brought some serious debts; as a result, the family had to move from one rented apartment to another.

Young Baker grew up with a brother, Matt; the boys were fond of sports. The would-be QB went to Lake Travis High School and gladly joined a football team, helping it win the state championship and set several records.

Few fans know that Mayfield enrolled at Texas Tech at first but failed to adjust to the team and coaches there. Nevertheless, his early stats were pretty good: twelve touchdowns, 2315 passing yards, and more than 64% of successful pass attempts. Interestingly, the young man was a starting quarterback there from the first game.

In 2014, Mayfield transferred to the University of Oklahoma but had to wait until he was eligible to support its football team. The sportsman debuted in the field only in summer 2015. Despite the fact that progress was made slowly, he managed to get 3700 passing yards by the end of the first season and 36 touchdowns.

From that time, Mayfield turned into the leading QB in the team. He had nominations for prestigious awards and was selected to the 2017 Sugar Bowl, where the Sooners celebrated an impressive victory over Auburn.

The final season in the college was mixed: Baker erupted several disciplinary scandals but led Oklahoma to high-level tournaments and gained the cherished Heisman Trophy.

Many NFL agents noticed Baker’s collegiate accomplishments. In 2018, the Cleveland Browns decided to draft him and signed a $32.7 million contract with the sportsman.

The rookie year started with a fascinating chain of victories: Mayfield was invincible for 19 matches. He became new blood for the Browns, who helped them make the most triumphant season since 2014 with minimal losses.

In comparison, 2019 was less lucky for the athlete; he described his failures as “dumb” mistakes rooted in the lack of discipline. The situation caused much discontent among fans; it was also the year when Baker had no individual prizes.

The athlete used to date some woman named Morgan Mayberry in 2016; she remained his girlfriend for a year. Further on, Mayfield’s friends introduced him to his future wife, Emily Wilkinson.

Things were developing rapidly. The quarterback liked Emily at once and started showering her with messages and comments on Instagram; the excessive attention finally helped him earn her recognition. The lovers engaged six months after they had met and married officially in summer 2019.

Mayfield does not hesitate to express his opinion about team matters openly. For example, he was not much happy to hear that Duke Johnson requested a trade; he also said that the selection of Daniel Jones in 2019 was wrong and “blew his mind”.

Today, the young man’s career has come to its crucial point. Many experts are actively discussing whether he will rarely leave a bench or become a starter in more future games in his third professional year. At the same time, the athlete is a popular commercial figure: for instance, he had an endorsement deal with Body Armor last year.