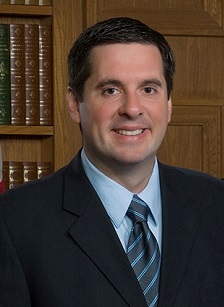 The American congressman has extensive experience of serving on the Intelligence committee. He is a man and politician with vivid points of view. Thus he is well known for his views on global warming, renewable energy, health care, and immigrant's problem.

His family operated the farm in Tulare, which they sold in 2006. His father and mother bought a dairy and moved to Iowa. Devin has got a younger brother. He got a good educationю First of all, Devin received his Associate degree in Arts, then he graduated from the university with a bachelor's degree in agricultural business. He continued his education on the master's program studying agriculture.

Since childhood, the boy had multitalented nature. Thus, at the age of fourteen, he tried himself as a businessman. He purchased seven heads of young cattle and had exact knowledge on how to achieve a quick profit from this investment.

In 2002 Devin decided to run for the Republican nomination. Those times his key opponents were Mike Briggs and Jim Patterson. He was the only candidate from Tulare, while two opponents were from Fresno. That fact helped Devin to win as candidates from Fresno split the vote.

After his victory, he managed to be reelected seven times. He represents the 22nd congressional district. In 2015 he became the chairman of House Permanent Select Committee on Intelligence. He is also a member of Ways and Means Committee, currently Ranking Member of the Ways and Means Subcommittee on Health. In 2010 he wrote a book "Restoring the Republic."

Thanks to his sturdy views, Devin was called one of the most reliable allies of Trump in Congress. In 2010 he introduced his vision of America's energy in the future. He presented the map of production and exploration of fossil fuel.

He doesn't support fear of global warming; the congressman calls it nonsense and human-made drought. As a farmer in the third generation, he repeatedly criticized the actions of the federal government to prevent global warming.

In 2017 he supported Trump's order to ban on entry into the USA by citizens from Muslim countries and called it common sense and security measure. In 2015 he clashed with Pentagon and Nato. He offered to relocate the American intelligence centers in Portugal, where lived Devin's ancestors.

Through his political career, he afforded to criticize his opponents among liberals and members of his party. In 2014 the congressman came under scrutiny when he called the Republican "al-Qaeda's best friend in Congress."

In recent years he served on Trump transition team and one of the first who denied connections between the president's campaign and Russian operatives. In 2019 he filled several defamation lawsuits against the accounts on Twitter. As a result, the popularity of these accounts had grown twice. This case was called one of the examples of the Streisand Effect. This year he also filed a defamation lawsuit against the newspaper "The Fresno Bee," which published the article:

As a result, the first words of the headline – Yacht, Cocaine, Prostitutes – became the top trending hashtag on Twitter. In Autumn, 2019 the republican clashed with Alexandra Chalupa on Twitter when he name-checked her during a recent committee hearing. In 2019 in the Wednesday hearing, the politician asked the special counsel Robert Mueller if Russian spies could have compromised Boris Johnson.

Devin has got his account on Twitter. He has been married to the elementary school teacher since 2003. The twosome has got three daughters. His net worth is estimated at $158,000.