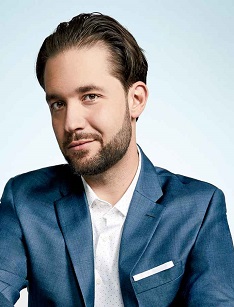 The Brooklyn native, Alexis Kerry Ohanian became a co-founder of online community Reddit.com in 2005. Later he was involved in the foundation of Initialized Capital, Hipmunk, and Breadpig, and became the successful investor, entrepreneur, and writer. Made a successful career in the business world, Alexis has earned net worth, estimated at $70 million.

In 2017 Alexis tied the knot with Serena Williams, well-known athlete and titled tennis player. The pair has a daughter. Although Ohanian is far from being a billionaire, various magazines included him in their lists of the most influential people in the technology industry.

Alexis is the native of Brooklyn. He was born on April 24, 1983, in an ethnically mixed family. His mother came from Germany but had Armenian roots, also as his father. Alexis recognized but didn’t learn the Armenian language. The parents spoke it to each other, but mostly as a language that Alexis’s sister and he couldn’t understand.

Alexis studied at the Ellicott’s high school and did it well. Soon, he enrolled at the University of Virginia in Charlottesville. He met his friend and future business partner Steve Huffman there. In 2005 Alexis finished the studying. Right after graduation, he worked as a waiter in a fast-food restaurant

The turning point of his Ohanian’s life was a lecture of Paul Graham in Cambridge in 2005, which Alexis and Steve visited together. It was called “How to Start a Start-up.” They started making their first steps in business the same year. They picked the idea of a mobile food ordering service called MyMobileMenu to Paul Graham. However, he rejected their idea.

It took them three weeks to do the work. In 2005 Alexis Ohanian, together with Aaron Swartz and Steve Huffman created Reddit. But within a month of building the site, Ohanian received terrible news from his relatives. His girlfriend was in a coma, because of the accident with a fall from the window. Also, Alexis’s mother was diagnosed with an inoperable tumor in her brain.

In 2006, Condé Nast approached Ohanian and Huffman with an offer. Then Alexis said: "Founders are supposed to be not at all interested in selling. But there is a price at which a founder can't help being interested." After 16 months of working on Reddit, Huffman and Ohanian sold it for somewhere between $10-20 million.

Alexis Ohanian founded Breadpig in late 2008 as incorporation for creating and selling geeky things to make the world suck less. Rather than following the typical corporate directive of maximizing shareholder wealth, Breadpig donated all of its non-sustainable profits to organizations and individuals that made the world less sucky.

In 2010 Ohanian, together with Garry Tan founded venture capital fund, called Initialized Capital. It raised $7 million in its first fund. The company focused on seed and early-stage venture investments. It looked for high-quality founders first and then tried to see if it could help or understand the market a company was attacking in any way. As of 2019, the company has raised more than $500 million in funds and has made 114 investments. Alexis worked through Crunchbase account.

Left Reddit in 2010, Alexis decided to volunteer in Armenia with Kiva Microfunds non-profit organization for four months. It was Alexis’s first visit to his ancestral home. Ohanian teamed up with several like-minded people in Armenia and organized the first TED Yerevan where famous people shared ideas on how to make the world a better place to live in.

Inspired by his tour to Armenia, in 2018 Alexis launched Shakmat Brandy in collaboration with Flaviar, a direct-to-consumer spirits club. Shakmat is a blended, 23-year-old XO brandy, clocking in at 40 percent alcohol content. The spirit is grape-based and utilizes a double distillation process involving both a continuous column still and French alembic stills.

Being the backer of several crypto companies, Alexis gave a lot of interviews in 2017 – 2019, discussing cryptocurrencies and blockchain technology moving towards the venture capital sector. Speaking about the 2018 Bitcoin’s crash, Alexis reported:

“It’s painful. But if you were investing it in crypto in the first place, you really should have been thinking long-term. That’s just generally good advice for any kind of investing, but especially something so nascent as crypto.”

All the mascots of Alexis’s companies were created and adopted by himself.

In 2017 Headscarf-wearing women received an emoji of their own, thanks to a 16year-old Saudi girl and the Ohanian’s help. In 2016 Rayouf Alhumedhi proposed the idea to The Unicode Consortium, the non-profit corporation that reviewed and developed new emojis. She drafted a proposal on her laptop and sent it to Unicode.

Rayouf quickly gathered support and got the contact of the company’s designer. Although many people were supportive, some described the emoji as "unnecessary" and a "part of patriarchal constructs that oppress women." Alexis backed Rayouf’s proposal and hosted an online discussion where Alhumedhi talked about her idea and responded to critics.

In March 2012, Lester Chambers, The Chambers Brothers’ member, posted a photo, which hit the web showing a musician holding a gold record in front of his face with the following note attached:

For a brief moment in the era of BuzzFeed and Reddit, Lester became a symbol for those victimized by the music industry–long enough to catch the attention of Ohanian. He decided to launch a Kickstarter page with Chambers’ brother to raise funds for the singer’s new album. Ohanian aimed to prove that there were new, sustainable funding opportunities for artists then thanks to platforms like Kickstarter. Looking to raise $39,000 on the platform, the two raised $61,000.

On May 16, 2014, Ohanian started raising money for placing billboards. He called people to join him in defending the rights of the open internet and telling the FCC that it was not okay for them to side with an oligopoly of internet providers instead of the American people. Alexis joined several organizations to place a billboard right in Washington D.C. that proclaimed, "Keep the internet free & open for all!"

Ohanian hasn’t got a rich dating history. Currently, he is married to Serena Williams, titled well-known tennis player. They met at the Rome Cavalieri hotel in May 2015. Then Ohanian had just broken up with his college girlfriend Sabriya Stukes, whom he had been dating for five years. Serena had never heard of Reddit before, and Ohanian had never watched Williams play tennis, but he agreed to come to the match later that day.

Alexis quickly realized that he wanted to marry Serena, but the two decided to keep quiet about their relationship. Then, in November 2016, Serena finally posted on Instagram their first photo together at a Halloween party. Just one month later, Alexis dropped to one knee and asked Serena to marry him.

The next two years have been huge for the pair. Since December 2016, the tennis superstar and tech guru got engaged, welcomed a daughter, and tied the knot. In January 2017, the exciting news reported that Serena got pregnant. The same time Serena played a tournament in Australia, which she ended up winning. She was eight weeks pregnant then.

The couple welcomed their daughter in September 2017. Two months later, they tied the knot at the Contemporary Arts Center in New Orleans. Alexis Ohanian definitely feels some type of way towards famous rapper Drake, because Drake and Serena dated for a while. Alexis publically conflicted with rapper several times.

In 2013 Alexis started a writing career. He wrote and published his first book. He called it “Without Their Permission”. It was written for young entrepreneurs who believed in the future of the Internet as a source of profit, entertainment, and support. The book became the best-seller thanks to almost half a year promotion tour.