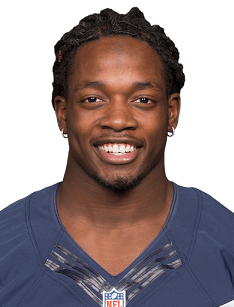 Born in Kenosha, Melvin Gordon started a football career in NFL in 2015, as a rookie of San Diego Chargers (currently Los Angeles Chargers). He was selected at the No.15 overall pick. In 2019 he issued a pay-me-or-trade-me ultimatum to the Chargers. He plays at a running back position. Melvin earns his income from football career, his businesses and from endorsements. He has an estimated net worth of $10 million.

The native city of Melvin is Kenosha, located in the state of Wisconsin. His birthday was on April 13, 1993. Melvin’s father was a drug dealer, while his mother was a nurse. Melvin Gordon Sr. was known as Big Bo. He sold cocaine, which was the only source of the family’s income. Once Melvin’s father was caught up and arrested for his activity. However, it didn’t prevent Melvin from believing that his dad was great.

The parents were the biggest supporters of Melvin, who was the only child in the family. Melvin started his football career at the high school. He studied at Mary D. Broadford High School. Apart from playing football, Melvin competed in the long jump and the 100-meter dash as a track and field athlete. Gordon finished his junior season, won all the state and region WFCA awards.

It became obvious that that bloke would thrive as a sportsman. Thanks to Melvin’s success in football and track and field events, some sources listed him as one of the best prospective athletes. Unlike most footballers who only start to gain significant attention during their college career, Melvin was very much popular right from his high school days.

At the age of 17, ESPN named Melvin, the best player in the north-central U.S state with Rivals.com rating him as a four-star recruit. He had a good number of universities showing up to have him have his college career with them. Melvin got offers from the University of Wisconsin–Madison, Michigan, Iowa, and Louisville. He decided to get an education in Wisconsin.

The college career of Gordon lasted for four years. In 2011 he became the freshman of the Wisconsin Badgers. That year he managed to spend only three games in September. He had succeeded to score the first touchdown of career and rush for 32 yards on eight carries against South Dakota. Then he got injured and missed the rest of the season.

After the recovery, there was a much better season for Melvin. In 2012 he ran for a career-high 216 yards on just nine carries and scored a touchdown in the Big Ten Championship game against Nebraska on December 1. In 2013 sophomore Melvin Gordon was included to the ten semifinalists for the Doak Walker Award, given to the nation's top running back. However, Melvin won that award only in 2014, a season when Gordon became the leading player of the Badgers.

Gordon also became the best defensive player in season 2014. He gained 2 587 rushing yards. According to Gordon’s college stats, in four years he achieved total 4 915 rushing yards. In 2015 Melvin went on Draft. He participated at the Combine, where he had a strong showing on the field and drew some high praise in the form of comparisons to then NFL players. Gordon looked like the top back at the 2015 draft class.

On April 30, 2015, Melvin Gordon became the rookie of San Diego Chargers. He was drafted as the 15th number. The sides signed a four-year $10.66 million contract. Melvin received a $2.6 million average salary. Melvin started a rookie season as a starting running back. Played 14 games, Melvin got injured in December. In his debut season, the player made 184 rushing attempts and gained 641 rushing yards.

In 2016 San Diego changed their name and returned the original Los Angeles Chargers. Melvin was named to his first Pro Bowl. Spent two good seasons, in 2018 the Chargers picked up the fifth-year option on Gordon’s contract.

Despite missing four games due to injury, Gordon's 2018 season was his most efficient, at least according to advanced metrics; he ranked third among all backs in value per play and was fifth in total value. Looking at conventional stats, Gordon had 885 rushing yards, averaged 5.1 yards per carry and had ten rushing touchdowns. He also added 50 receptions for 490 yards and four more scores.

In January 2019, Melvin played against his former teammate, then Patriots player James White. They were a premier running back tandem at Wisconsin. White talked about his close relationship with Gordon, who the Patriots running back said was "like a little brother" to him.

"Since he stepped foot on the Wisconsin campus we were always tight," White said. "All the running backs we were. So he's a good football player, a good person. I wish him nothing but the best of luck, but hopefully, he doesn't do too much on Sunday."

In 2019 Gordon and the Chargers began to clash. Every year, there were a couple of veteran players so dissatisfied with their contracts they are willing to miss the beginning of training camp in an attempt to get a new deal. That year wasn't any different. Melvin, whose rookie contract expired after the season, issued a pay-me-or-trade-me ultimatum to the Chargers in July. Melvin didn't intend to show up until one of those two things happened.

In June he reported:

"I'd be lying if I said I didn't want a deal done. But that's not going to stop me from coming out here and doing what I need to do. We're going to see. I would like to go out there and have it done. We're talking right now, and that's kind of where I'm going to leave it."

Initially, Melvin scheduled to play under his $5.605 million fifth-year option in 2019 season. In terms of average annual salary, Gordon ranked 27th among running backs, sandwiched between Rashaad Penny and Damien Williams. The Chargers had Austin Ekeler and Justin Jackson on the depth chart but not much else. It's worth noting that the Chargers didn't draft a running back though they must have known Gordon would want a new deal.

Meanwhile, Melvin said that his teammates and running backs around the league supported him. He said he gave some teammates a heads-up that he would threaten to hold out if he didn't get a new deal.

"They're all behind me. They all got my back. They all told me, 'You know what -- we don't really speak on contracts -- but you just go and do what's best for your family.' And I'm glad I got that support from them."

Gordon reported that he wanted to remain a Charger, and he wanted fans to know that:

"Just because we're going through contract issues right now doesn't mean I want to get traded. I love being a Charger. I don't want them to feel like I don't want to be there."

In case of Melvin’s trade, by the reporters, there were named the best landing spots for the player. The Buffalo Bills, Philadelphia Eagles, and the Green Bay Packers headed the shortlist. On the eve of the summer camp, Melvin Gordon's fantasy value was measured by his average draft position (ADP) in fantasy football mock drafts. In previous drafts, Gordon's then ADP was 1.07, which indicated that his fantasy outlook was to be the 7th pick of the 1st round and 7th selection overall.

In summer 2019, Melvin Gordon and Trae Waynes, two of Kenosha’s favorite native sons, returned home to host a tournament in a sport that just about everyone could remember playing in gym class. On July 19 from 3 to 9 p.m., Gordon and Waynes — the former Bradford teammates and close friends —hosted a Dodgeball Night of Fun at Mahone Middle School. On the event, everybody could take Gordon’s autograph.