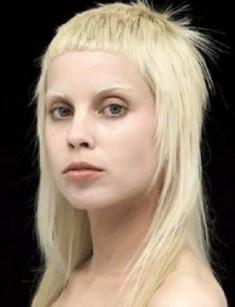 Yolandi Visser is a South African singer and actress known for her unique style and mesmerizing vocal. She earned public recognition as the soloist of the rap-rave group Die Antwoord and combined an aggressive recitative and melodic childish voice.

Anri du Toit was born on December 1, 1984, in a resort town Port Alfred located in the eastern part of South Africa. A family of a Christian minister and his wife adopted the girl when she was a baby; she had an elder brother who was also adopted. Yolandi never knew her biological parents.

Anri’s mother was white, and the father belonged to the black. As the artist told journalists, the biological family rejected her because she was born in a difficult period of racial segregation in the country.

Visser went to St. Dominic’s Catholic School for Girls and proved to be different from peers early: she was a rebel and called herself a “little punk”. She regularly fought with her classmates.

As the eccentric young woman turned 16, she was expelled from the school because of her destructive behavior. Anri finished her education in a boarding school in Pretoria. It took nine hours to go there by car, but the artistic atmosphere of the school was well worth it. This is where Visser had the opportunity to develop her talent.

2003 became a breakthrough year for Yolandi: she moved to Cape Town and met the rapper Watkin Tudor Jones also known as Ninja from Die Antwoord. At that period, the young man was a member of an unpopular rap group The Constructus Corporation along with Felix Laband. The band existed for a year and presented the album The Ziggurat; one could hear Visser’s vocal there.

Although the young woman was not familiar with hip hop, Ninja invited her for an audition. He was impressed by Yolandi’s abilities and promised to teach the beginning singer everything he knew. Thus, they created the group with the producer Justin De Nobrega and the rapper Neon Don and named it MaxNormal.tv in honor of character from the English sci-fi comics 2000 AD. The group worked for several years and had two full-fledged discs released.

In 2008, Ninja and Yolandi Visser founded the group Die Antwoord which meant “the answer” in Afrikaans. DJ Hi-Tek joined the new team. The musicians identified themselves as a part of the South African counterculture called “Zef” associated with the white petty bourgeoisie. Yolandi described it:

The band debuted with the album $O$ in 2009; the disc was notable for the hits “Rich Bitch”, “Super Evil”, and “Enter the Ninja”. The unusual music video for the latter song immediately grabbed critics’ attention. Following the first success, Die Antwoord signed a contract with the American label Interscope Records and started working on new singles and videos. They were always specific and bright and portrayed ordinary people of South Africa; the artists emphasized that most actors were their friends or acquaintances.

Yolandi and her team earned their fame quickly. In 2011, Die Antwoord created their own label Zef Recordz that presented the second and third studio albums, TEN$ION (2012) and Donker Mag (2014). The song and video for “Ugly Boy” proved to be tremendously popular. The fourth disc Mount Ninji and Da Nice Time Kid came out two years later and included the collaboration tracks with the retro diva Dita Von Teese, the American rapper Sen Dog, and the singer and actor Jack Black.

In 2010, the creator of The Girl with the Dragon Tattoo David Fincher wanted Yolandi Visser to play the main character: her hairstyle, body type, and overall look perfectly suited the protagonist. However, Visser rejected the offer: she decided to devote her life to music. Thus, the role was given to Rooney Mara.

In 2015, Visser and Jones debuted as actors in Neill Blomkamp’s action Chappie about a unique robot capable of feelings and personal thoughts. The project starred Hugh Jackman, Dev Patel, and Sigourney Weaver. Die Antwoord created several soundtracks for it. Although critics’ reviews were mostly negative, the movie attracted attention to the group and brought new fans.

Yolandi and Ninja have been a couple for a long time. Their daughter Sixteen was born in 2006. Four years later, the artists adopted a nine-year-old homeless boy Tokkie who lived in a nearby neighborhood. The children have appeared in Die Antwoord’s music videos, and the picture of little Sixteen appeared on the cover of the album MaxNormal.tv.

Whether Jones and Visser are married or broke up now is unknown: the musicians do not share the information about their personal lives. Yolandi has no personal Instagram account, but the group’s official page contains many photos of hers; the vocalist is wearing a swimsuit or appears without makeup in them.

Today, Yolandi Visser and Die Antwoord continue to give concerts in various countries.

The musicians hold public interest by the news about the group’s split up. However, these are only words so far.