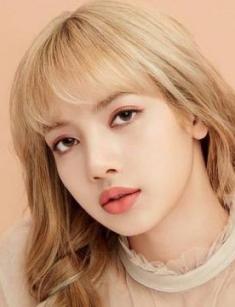 Lalisa Manoban is a popular member of the South Korean girl group Blackpink. The girl has the largest army of fans compared to other colleagues in the band. The singer dances well and is considered a polyglot, as she speaks Thai, Japanese, English, and Korean. Lalisa is the only non-Korean member in the group. She came from Thailand to conquer the music industry.

Lalisa was born Pranpriya Manoban on March 27, 1997, in Bangkok. But soon the parents decide to change her name and call their daughter Lalisa, which means in Thai "One who is praised." There is little information about the singer's parents. It is known that the girl's stepfather is the Swiss chef Marco Brueschweiler. Lalisa is the only child in the family.

The girl attended Praphamontree School 2. The school follows the English medium of instruction. Since childhood, Lalisa has studied dancing and singing. Her skills allowed her to become a member of the Thai dance group We Zaa Cool.

K-pop was a hobby of the young girl; especially she liked members of YG Entertainment from South Korea. Therefore, Lalisa set a goal to become a singer and began achieving it.

She had such a chance in 2010 when YG representatives came to Thailand to organize auditions. Lalisa was the only individual to pass. She is the first international singer in the company.

In 2011, the future star had a turning point in her career. She moved to South Korea, where she became an intern at YG Entertainment. Manoban improved singing and dancing for five years. At that time, Lalisa did not look like a pop diva because she dressed like a boy, cut her hair short, and performed rap songs.

In 2012, YG producers began preparing for the debut of the girl group. The process was difficult. Therefore, they could announce the members of the future famous band Blackpink only at the end of June 2016, and in August, Lalisa and the other participants released the debut album Square One. The songs “Whistle” and “Boombayah” immediately topped the Billboard chart.

Manoban took the stage name Lisa. She is the main dancer, lead rapper, backing vocalist in the band. The girl is the youngest member of Blackpink.

In 2017, Blackpink successfully debuted in Japan, and in 2018 the band had a so-called comeback in South Korea after the break and released the EP Square Up. Their music videos are getting a record number of views.

The band has a BLINK fan club with a black pink official banner. Millions of fans closely watch the girls' life. Any changes in appearance cause discussions. Lisa always amuses her fans. She constantly tries something new.

“I have recently become interested in cosmetics, sometimes I can apply some fancy makeup and suddenly appear in front of the members,” Lisa said in an interview.

The hair color change, hairstyle with a fringe and without it arouse great interest. Now Lisa Manoban is blond, and her appearance is an example to follow for BLINK fans.

Like any idol, the private life of Lalisa is spotlighted by the press and fans. The girl meanwhile does not tell about her boyfriend. But on Instagram, she posts photos with participants of the boy bands with whom Blackpink performs on the same stage.

Fans have already credited Manoban with a love affair with the guys from the group BTS, Jeon Jung-kook, Kim Tae-hyung, and Hyun Jung. The girl says about her future boyfriend:

"I would like to date a man who is much older than me and take care of me."

The girl also has ill-wishers. Some of them started a rumor that before plastic surgery, Lisa looked unattractive and could become an icon of style only due to operations. Lalisa has been targeted with a death threat by anti-fans. Some people believe that those who do not like the work of Manoban could do it. It is possible that the spiteful people reminded the singer that she was the only member from another country.

However, it’s impossible to assault Lalisa. A lot of bodyguards work to protect each member of the famous girl team. At concerts, they provide even better protection.

There are many interesting facts in the biography of Lalisa that emphasize the singer’s individuality. In Thailand, fans of the group call the singer Thai Princess. The girl has two cats that Lisa adores. Manoban loves baggy clothes, white sneakers, and knitted hats. The singer dreams of a younger sister.

Lalisa’s parents come to every concert and are proud of their daughter's success. The mother has always wanted her daughter to become a famous singer.

In 2019, the group has a new career stage, which helps them achieve global success. The girls are working hard, recording songs and improving the English language.

In April, the band will participate in the Coachella Valley Music and Arts Festival. Thus, they will make the debut in the USA. Blackpink will be the first Korean girl group to perform in the USA.

After that, the girls will go on a world tour and give concerts in North America, Australia, and in some European countries.

Then they will work in South Korea, and after that, the fans will be able to hear the solo projects of the members of the band.

Lalisa Manoban has an estimated net worth of $2 million as of 2019.