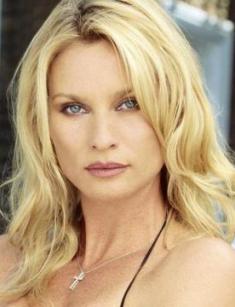 The actress’s bright femme-fatal characters made her recognized all over the world. Nicollette Sheridan earned her fame in the 1990s, but the role of Edie Britt in the series Desperate Housewives made her incredibly popular. However, it also played a cruel joke: following the unsuccessful trial against the creators of the project, the woman received no invitations. Sheridan has managed to overcome all the ordeals and came back to the screen triumphantly, though.

Nicollette Sheridan was born on November 21, 1963, in Worthing, Great Britain. Her mother, the British actress Sally Adams, was 16 when she gave birth to her daughter. The girl’s father, Arthur Sheridan, left the family soon.

Sally brought up her child alone and tried to provide her with adequate education and opportunities for development. Little Nicky began to ride horses at the age of three and studied foreign languages.

When the future actress was six, the mother met the actor Telly Savalas at the movie set of On Her Majesty's Secret Service. The half-brother Nick was born soon. The family moved to the United States when Nicollette was ten; she continued to do what she liked in the new place: reading and dancing.

Sheridan used to go to Millfield School in England and then continued her education in The Buckley School in Los Angeles. The young woman took up modeling early; her bright appearance and tall, slim figure made her a desirable persona on glossy magazine covers. For example, Cosmopolitan published her picture in a pink swimsuit emphasizing her sexy, catchy look.

Models are often invited to television, Sheridan debuted in the soap opera Paper Dolls (1984) on the ABC channel. Unfortunately, the series was closed in the mid-season, but the young actress was given the role in the romantic comedy The Sure Thing the next year.

Little by little, the British actress was earning the audience’s recognition. In 1986, the series Knots Landing brought her the first success. Three years of acting led to joining the major cast of the project. The series portrays several married couples living in Seaview Circle. Sheridan’s character, Paige Matheson, is a scandalous woman who interferes in the calm town life and identifies herself as the daughter of the main character, Mack MacKenzie.

Nicollette finished her work on the series in 1993. It brought her the Soap Opera Digest Award for Outstanding Lead Actress: Prime Time and made her an actress in demand.

In 1990, the artist personified Lucky Santangelo in the mini-series Lucky/Chances based on Jackie Collins’s book. The success was even sweeter when Sheridan was included in People’s 50 Most Beautiful People.

The following years were marked with many TV movies: Somebody’s Daughter (1992), Shadows of Desire (1994), Virus (1995). In 1996, Nicky finally got the chance to show her talent in a full-length movie: she appeared in Spy Hard and collaborated with Leslie Nielsen, who was immensely popular at that time. The actors personified a couple of agents on a risky mission.

1997 brought the role of the adventurer Allison Page (Sally Jones) in the comedy Beverly Hills Ninja; she plotted against the protagonist Haru (Chris Farley).

The late 1990s-mid-2000s did not present any significant works. Things changed only in 2004 when Nicollette received the lead part in Marc Cherry’s Desperate Housewives on ABC. The story about five housewives from the fictional city Fairview promised to be the project of the year. Indeed. 21 million viewers watched the premiere – it was the record for the channel in the last eight years. 30 million people watched the final episode; the series enjoyed various prizes: Emmy, the Golden Globe, and the Screen Actors Guild Award.

The actress’s character, the femme fatal blonde Edie Britt, is a little different from four close friends: Gabrielle Solis (Eva Longoria), Bree Van de Kamp (Marcia Cross), Susan Mayer (Teri Hatcher), and Lynette Scavo (Felicity Huffman). Britt is pretty scandalous and unfriendly when it comes to protecting her personal interests. However, fans loved her the way she was and felt upset when the artist left the project. According to Sheridan, her character did not have as much screen time as she deserved. The actress sued Marc Cherry and the ABC channel but lost both trials and worsened her public image. As a result, she had much trouble with further roles.

After the action comedy Code Name: The Cleaner (2007), the artist had no invitations; serial producers did not want to work with the scandalous artist as well. Nicollette switched to voicing animated movies and producing: she wanted to create movies independently from TV bosses.

On November 28, 2017, it was revealed that Sheridan was going to participate in the remake of the legendary series Dynasty (1981-1989). Producers gave her the role of Alexis Carrington that brilliant Joan Collins used to have.

Sheridan was good at playing “bad” characters and met all the expectations. Critics appreciated her work, and the woman continued to shine in the second season.

Nicollette’s personal life has been just as stormy as that of Edie Britt. The artist seems to be unlucky when it comes to romances, though.

At the age of 16, Nicollette was dating the singer and actor Leif Garrett and moved to his house. The couple stayed together until 1985.

Sheridan married the actor Harry Hamlin on September 7, 1991; the man filed for divorce the next year. As long as the actress was single again, she started seeing her personal trainer, Nicklas Söderblom. The lovers got engaged on the New Year’s Eve but canceled it in October 2005.

In 2006, Nicollette celebrated another engagement to the singer Michael Bolton; they had dated long before. Still, they suddenly broke up in August 2008.

2015 was marked with the long-awaited wedding: the TV diva married the actor Aaron Phypers. Although the spouses separated in 2016, they divorced officially only in 2018. Phypers immediately married the actress Denise Richards.

The actress has no children; she takes care of her Labrador Oliver.

On February 25, 2019, the woman announced she was leaving Dynasty due to family circumstances: she wanted to spend more time with her terminally ill mother in Los Angeles.

The actress is an active Instagram user: she likes to post provocative pictures to show she is fit and beautiful after surgery.