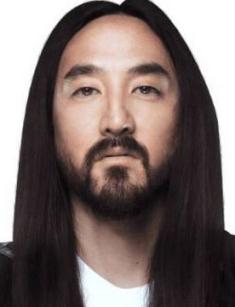 Steve Aoki occupies a prominent place among the DJs known to the whole world. In 2018, the British DJ Magazine put him on the 11th place on the list of the "true professionals" in this field. The American master of making mix-tapes became famous in the mid-1990s and keeps his leadership in the industry today.

Having made a career as a DJ, he succeeded in producing. The musicians are honored to record tracks on the cult label Aoki, because masters of DJ-ing, Dada Life and Armand van Helden also release their tracks within Dim Mak Records. The areas in which he became successful also reveal the versatile nature of this man. Aoki is known in the world of music, DJ-ing, producing, modeling business and charity.

The future DJ was born in November 1977 in Miami, but soon after the birth, the family moved to California, taking roots in Newport beach. Here, Steven Hiroyuki Aoki, a Sagittarius, spent his childhood and youth. His parents, Rocky Aoki and Chizuru Kobayashi, Japanese by nationality, were well-off, even though they raised six children.

His father, a former Japanese wrestler, a well-known businessman who founded a chain of Oriental restaurants, had little influence on Steve. The boy was brought up by his mother and grandmother. Parents did not want to spoil their boy but supplied him with everything necessary. Such childhood without excesses ended up being just what the boy needed. The teenager played badminton, became the leader of the school team, refrained from alcohol, cigarettes, and drugs, and became interested in music.

At the age of 14, Hiroyuki gathered friends who shared his passion for music to his home-parties and even recorded his first amateur tracks. At school discos, Aoki became the star of the dance floor. After graduating from high school, the young man entered the University of California, the campus of which was located in Santa Barbara, washed by the waves of the Pacific Ocean.

At the age of 20, the University student created a record label, which eventually became mega-popular. Steve came up with the name himself, remembering his childhood icon, Bruce Lee, and one of the types of martial arts. Dim Mak Records, founded in 1996, still operates today. In addition to recording, Steve Aoki played music himself. The names of the bands in which he played have long been forgotten. However, Steve remembers his first experience with tenderness.

This experience was useful to the American: the guy became the author of remixes and undertook mixing of tracks of other authors. Aoki soon joined forces with Los Angeles-based musician Blake Miller. The creative duo was called Weird Science. In his musical career, the young performer has worked with such mega-stars as Michael Jackson, Lenny Kravitz, and the band Duran Duran.

In 2006, the DJ, together with like-minded people, founded a charity organization that helped boys and girls from low-income families to receive music education, visit courses and lectures. Steve's discography opens with the mini-album Pillowface and His Airplane Chronicles. The tracklist includes three songs. Aoki recorded his debut mix at Thrive Records, not on his label.

His first full-fledged solo album, Wonderland, the star of the dance floors released in early 2012, bringing "the cream of the crop" to work with him. Hip-hop artist Kid Cudi, pop singer Wynter Gordon, drummer Travis Barker, punk rock band The Exploited and other musicians whose names are well known to music lovers became the guest-stars of the album. The musician has experience of working with DJs Tiesto and Diplo.

His work on the dance floor and the production did not become an obstacle to a new passion of Steve Aoki. Together with his sister and well-known model Devon, the DJ released a line of outerwear and sunglasses. In collaboration with the brand WeSC, he released headphones, all models of which are made in the favorite signature color of Aoki — green. In tandem with Supra shoe company, Steve gave fans and fashionistas branded sneakers.

At the end of the summer of 2013, the producer and DJ pleased fans with a joint track with the legendary rock band Linkin Park. Three years later, the track "Just Hold On" became the fruit of cooperation between Steve Aoki and British singer Louis Tomlinson.

The American DJ, who refrained from drinking and other bad habits in his youth, made up for it on the peak of his career. His go-to things, in addition to the director's chair, inflatable boats and proteins, includes champagne and vodka. In an interview, the star admits that this is the way he relieves the stress of too-tight schedule:

The year 2018, became fruitful and full of surprises for Steve Aoki. Together with Norwegian singer Ina Wroldsen, the DJ gave music lovers beautiful song "Lie To Me." In the same year, there was a joint song with the K-pop band BTS, called "Waste It on Me," on which they shot a bright music video. Another fruit of the collective work of the dance floor star and Puerto Rican artists Daddy Yankee, Elvis Crespo, and the American band Play-N-Skillz was a hit "Azukita."

The DJ is in great shape. With a height of 5 feet 74 inches, he weighs 156.5 pounds. The secret life of the star developed happily.

At the end of 2015, Steve and Tiernan Cowling, a beautiful model from Australia, held a luxurious wedding in Hawaii and Maui. The ceremony was closed, so only relatives and guests were present.

The couple doesn't have any kids yet.

Steve Aoki's net worth is estimated at $75 Million. In 2019, the DJ and his Anglo-Norwegian colleague Alan Walker presented the track "Are You Lonely" to fans of club music. This song in the genre of dance and electronic music, Steve and Alan recorded with the help of a pop group called ISÁK. The song had good reviews from music lovers around the world and became a hit.

Another surprise of 2019 from Steve Aoki — a joint song with the Korean hip-hop group Monsta X, "Play It Cool," on which the guys also shot a music video.

Millions of subscribers on Instagram,Facebook, and Twitter follow Aoki's creative biography, while the DJ and producer regularly delights fans with fresh posts and photos.