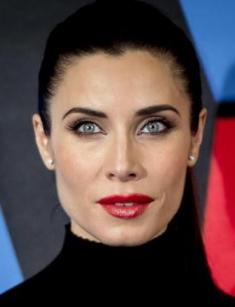 Pilar Rubio is a Spanish journalist and TV presenter who is also known as the wife of Sergio Ramos, Real Madrid’s center-back. The beauty appears on covers of men’s magazines, as well as movies and commercials; she can boast the title of the Premio Joven best television reporter.

The would-be celebrity was born on March 17, 1978, in Torrejón de Ardoz located near Madrid. There is no information about Pilar’s parents: she never talks about them in interviews or posts their pictures in social networks to save their privacy and keep them out of public attention.

Young Rubio studied economics at a university but realized soon it was not her cup of tea. At the same time, the beauty worked part-time as a model and shot for magazines. When the woman decided to quit economics, she decided to devote her life to journalism. Prettiness helped her take the first steps and participate in TV projects and, later, movies.

Pilar’s career started developing rapidly after the sitcom Sé lo que hicisteis. Producers noticed the actress’s talent and gave her secondary roles in Isi & Disi and Alto voltaje. Besides, the woman continued to work as a model and appeared in campaigns for Hyundai, Amstel, and Canal+.

Rubio’s excellent sense of humor manifested itself in the Spanish show La ventana indiscrete: the audience could see her home-recorded video there. Overall, the artist’s TV career has been more successful than cinematographic achievements.

Further on, Rubio expanded her activities and participated in Piratas Telecinco Adventure series; she co-authored the sitcom El Hormiguero in 2014.

The romance with the center-back Sergio Ramos from Real Madrid multiplied the number of the artist’s fans. When the future spouses met, Ramos was dating another woman, Lara Álvarez.

Their meeting took place at a charity event of Alma Foundation. Pilar came to the athlete and asked the club uniform as a present; they began to date soon.

Although the relationship seemed perfect, it was not easy for them to overcome the differences in upbringing and worldview. Ramos respected Andalusian traditions and tried to persuade his girlfriend to quit her career; he wanted Pilar to settle down and appear on television less frequently.

Rubio did not want to give up her favorite activity and continued to participate in hot photo shoots; the lovers broke up. However, they could not forget each other. Soon, fans could see their pictures together on Instagram.

In 2013, Sergio revealed the news about his girlfriend’s pregnancy. The son Sergio Ramos Rubio was born in 2015; the second boy, Marco, was born the next year. In 2018, the happy parents welcomed the third child, Alejandro.

Pilar and Sergio spent six years together and only then married; they took their time and built careers. The couple claimed that the sportsman was too busy preparing for competitions, and the journalist was also overloaded with work. Still, FIFA World Cup 2018 motivated Ramos to propose to the mother of his kids.

Rubio is eight years older than the sportsman. She takes good care of the children and remains a popular TV persona loved by all Spain. Ramos befits her achievements and pleases his fans with new sports achievements.

The model’s height is 5.38 feet (164 cm.); her weight is 112.45 lbs. (51 kg.). Many brands offer Pilar Rubio to collaborate: the woman’s natural beauty has not been touched by surgery, unlike many other celebrities.

Today, Pilar’s career is closely connected to television and commercials. She is known as a photo model, spokesperson for brands, or reporter rather than an actress. However, the woman is not upset about it: on the contrary, her dream of becoming a famous journalist came true. People love Rubio as a TV personality, too, and see her as an independent person, not only the star soccer player’s wife.

Pilar collaborates with Rebajas del Corte Inglés and appears in its commercials. Besides, one could see her as a jury member in El Hormiguero de Pablo Motos. The model often shares photos and videos on her Instagram page.