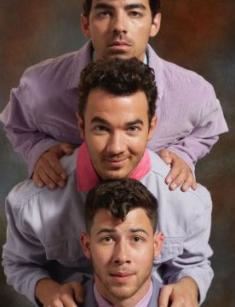 Jonas Brothers is an American pop rock group consisting of three brothers: Kevin, Joe, and Nick. They founded the group in 2005 and got a nomination for Grammy for Best New Artist, as well as the American Music Awards for Breakthrough Artist.

By 2010, the band presented five albums. In 2019, following a long period of silence, the new album was announced.

The musicians are also famous as actors: they have participated in many movies and series and had both cameo and alternative roles.

Joe (Joseph Adam Jonas) is a middle brother and a soloist; he plays the guitar, tambourine, percussion, and keyboard. Before the group formed, he had not considered a music career – the boy dreamed of being a comedian actor.

The youngest brother, Nick, is also a vocalist; he plays the drums. Friends and colleagues nickname him “Mister President”.

Many other musicians contributed to the group’s album recording and concerts: the guitarists John Taylor and Greg Garbowsky, the keyboard players Ryan Liestman and Marcus Kincy, the drummer Jack Lawless, and the backup vocalists Paris Carney-Garbowsky and Megan Mullins.

Nick was the first family member who entered the world of show business: the six-year-old met his first manager in a barber’s shop where the young talent was giving an improvised performance. By seven, he became a Broadway artist. Nick worked as an actor until 2004; the audience could see him in Les Misérables, Beauty and the Beast, The Sound of Music, and other plays.

In 2002, the young man started his music career and recorded the song “Joy to the World”. The next year, INO Records introduced the track to Christian Radio; it was popular among listeners.

The successful debut brought the contract with Columbia Records; the second single “Dear God” and the album followed soon. The disc included several tracks with his brothers, Joe and Kevin.

In 2005, the beginning artists met the president of the label Steve Greenberg. He liked Nick’s album. More than that, when Greenberg listened to “Please Be Mine”, he offered the brothers a new contract. Thus, the group Sons Of Jonas came into being; the name was changed to Jonas Brothers later.

The young men’s popularity was growing, and the media paid much attention to them. In 2005, Jonas Brothers participated in Kelly Clarkson’s and Jesse McCartney’s tours and opened shows for Backstreet Boys and The Click Five. The album It’s About Time was being prepared; the release was scheduled for 2006.

The debuting single “Mandy” and the music video for it were presented in 2005; MTV broadcast it. The second hit “Time for Me to Fly” served as the soundtrack for the movie Aquamarine. Besides, the brothers went to a six-month tour with Aly & AJ in 2006.

The long-awaited disc It’s About Time appeared two years later. Only 50 000 copies were presented, though: the label did not consider the musicians promising and worth producing. Thus, the band started thinking about a break-up.

2007 was marked with the collaboration with Hollywood Records; Jonas Brothers had a tour in the United States and pleased their fans with the single “Hold On”; it climbed up to the fifth position in Billboard Hot 200. The hit “SOS” followed right away, and the disc was being promoted. The brothers took part in American Music Awards and held a 64-concert tour with Miley Cyrus.

Soon, the artists had another event, Burnin’ Up Tour, and presented the disc A Little Bit Longer. In August 2008, one of the group’s major hits, “Burnin’ Up” was premiered. The next year was marked with the album Lines, Vines, and Trying Times and an international tour.

All the group members continued to develop their talents as a team and solo players. In 2011, Nick and Joe released their individual albums: Who I Am and Fastlife correspondingly; Kevin focused on his family. The brothers won the Bravo OTTO as the best group of the year.

In 2012, the artists took a break: they needed to regain their strength and solve some personal problems. When the group canceled a contract with Hollywood Records, they founded their own label, Jonas Enterprises, and began to record a new album. A promo-tour started in New York; Jonas Brothers also visited Russia and Latin America. The single “Pom Poms” immediately got popular on iTunes; the hit “First Time” pleased fans in summer 2013.

Soon, the new album V (Five) was announced, but it did not come out.

The young men’s popularity gave them a chance to star on television. In 2007, the brothers appeared in an episode of the series Hannah Montana and recorded the song “We Got the Party” with Miley Cyrus. After the singers participated in a tour together, Disney offered them to create the movie Hannah Montana and Miley Cyrus: Best of Both Worlds Concert and the series about the boy band. By that moment, their popularity was immense.

The movie Jonas Brothers: The 3D Concert Experience appeared after the album A Little Bit Longer was released. Disney continued the collaboration with the series Camp Rock (2008) and Camp Rock 2: The Final Jam (2010).

The audience did not lose their interest in the brothers when they grow up. In 2012, the TV project Married to Jonas about Kevin and his wife Danielle was premiered; the next year brought the second season. Thus, the brothers’ wives also received their piece of fame.

Today, the pop-rock band continues to develop and give concerts. The recent song “Sucker” and its music video became the leader of charts in America, Australia, and Canada. Besides, Jonas Brothers and the vocalist of One Republic Ryan Tedder presented the single “Cool”.

The new long-awaited album Happiness Begins has been presented in summer 2019. The brothers have spent some time apart and gathered together to remind everybody about themselves. The artists keep fans interested by posting new pictures on Instagram.