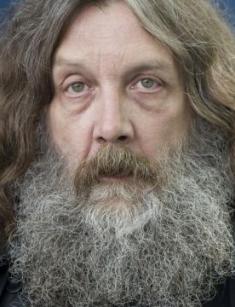 If you happen to meet Alan Moore in the street (or at least look at his photo), you can confuse him with a homeless person. It is difficult to accept the fact that the comic book legend and creator of V for Vendetta, Watchmen, Hellblazer and The League of Extraordinary Gentlemen looks like a savage man with a tangled beard. Besides, he is a loner who is fond of magic and believes in the Roman snake god Glycon. Alan Moore has a net worth of $10 million.

Alan Moore was born on November 18, 1953, in Northampton, which is located in the UK. The house he was born in was located in the working-class district of The Boroughs. It was here where the future writer spent all his youth.

In one interview, the author admitted that, although life in the area was not the easiest because of illiteracy and low income, Moore loved it and did not expect to live in any other way. Since childhood, he was fond of reading not only books but also comics about Sherlock Holmes, Captain Nemo, Fantastic Four, and Flash.

In primary school, Alan was the best student because of his love of literature. However, later he was transferred to the same group with children from wealthy families belonging to the world, the existence of which the boy did not even think about. One of the school's best students from a poor neighborhood was unable to cope with the competition from more educated and wealthy peers, so he lost his position.

Having dropped out of school, Moore became interested in the use and distribution of "mind-blowing" drugs among his peers. He was expelled from the school for illegal trade, and the school principal also distributed information to his colleagues and asked them not to take him to their schools and universities. The way to higher education was closed to Alan. He found a job in a tannery from which he was soon fired because of smoking marijuana. Then he started cleaning toilets and creating comic books at the same time.

At the beginning of the creative activity, the future master of a word not only thought up small plots but also illustrated them. The first characters created by Moore were animals - ironic Maxwell the Magic Cat, mouse - political activist Anon E. Mouse, St. Pancras Panda, detective Roscoe Moscow. The continuous release of comics about Roscoe Moscow in 1979 brought the guy his first regular income, and the adventure about Maxwell pleased readers until 1986.

Soon, the writer decided that he had given too little time to think about the details of the story, and focused more on the text than on the illustrations. He wrote for the popular 2000AD anthology a story about Judge Dredd, thanks to which Alan was noticed despite a refusal to publish.

After working on the short stories of Future Shock and Doctor Who, Moore began to receive more serious orders, including from Marvel UK and Warrior. It was in the publishing house that monthly series Marvelman (later renamed Miracleman) and V for Vendetta appeared, which overnight transformed Moore from a promising newcomer into a superstar.

The writer has also achieved fame overseas. Famous American publishing house DC Comics asked him to develop a scenario for a not very successful series of comics The Saga of the Swamp Thing. Moore himself created the story of the character from scratch, having thought through a sharp turn in the biography of the creature. A breath of fresh air went to the benefit of the series and attracted not only the old but also new readers.

In these comics first appeared occult detective John Constantine, reminiscent of the author being the same cynical and distrustful Englishman from the working class. The character immediately found his fans and soon found a solo series, which became popular.

V for Vendetta and Watchmen were born out of ideas of other authors. The first series tells the story of events that occurred after the nuclear war in Britain when the fascist party came to power. The former prisoner of one of the concentration camps, hiding his face with a mask of a smiling Guy Fawkes, brings the idea of open anarchy to the masses. The protagonist successfully breaks the system by blowing up government buildings and hunting party leaders.

The story of Watchmen (which is a collaboration between Moore and artist Dave Gibbons) started with the unexpected murder of one of the superheroes and with each chapter became more and more confusing, plunging the reader into the atmosphere of the end of the world. At the time of release, the comic book was unique in everything, from the details of the characters and ending with non-standard applications to each part.

The recurrent question "Who is watching over the watchmen?" is asked to the readers to reflect on the questions: why do the majority admire masked vigilantes acting outside the law; do the heroes have the right to do their deeds; do they change the world for the better?

Then, the author created works about two main characters of the DC universe. In the comic book Whatever Happened to the Man of Tomorrow?, he told the final story of Superman, and in The Killing Joke, he discussed how long the enmity between Batman and Joker could last.

In 1987, after DC rejected one too bold idea of Moore, he decided to stop cooperating with companies that year after year duplicate movies and comics about the same characters.

At the beginning of the new decade, when Alan broke off contracts with major publishers, he worked on a comic book about Jack the Ripper called From Hell. In a new graphic novel, Moore talked about the reason which caused the wave of murders and gave a fresh look at the identity of the famous killer.

The comic books of the writer are a fruitful source for Hollywood blockbusters. Thus, five of his works have already been filmed. Constantine was screened twice, The League of Extraordinary Gentlemen, From Hell, V For Vendetta, Watchmen. However, the creator himself does not recognize the movies and prohibits using his name in credits and does not get a single cent for the rental of screenings. The fact is that Moore considers comics a full-fledged art that does not require additional interpretation.

Alan Moore is happy not only in his professional but also in his personal life, and his wife is the artist Melinda Gabbie.

Now Alan continues to be engaged in writing and artistic creativity.

In 2019, the author's new comic book Providence is being prepared for release, in which Moore again touches upon the topic of Lauracraft mythology. According to the man, the idea of the novel has been developed in his head for four years.