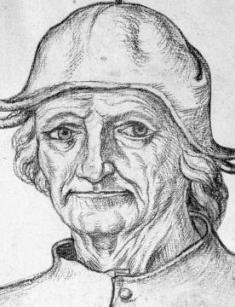 Jheronimus van Aken known as Hieronymus Bosch is a Dutch painter of the Renaissance epoch who created fantastic, folk, philosophical, and satirical motives in his works.

The painter was born circa 1453 in ’s-Hertogenbosch, Duchy of Brabant. His family came from the German town Aachen and had old connections with art. Hieronymus’s grandfather, Jan van Aken, and his four out of five sons were painters – the father Anthonius was one of them.

The family workshop took orders and painted walls, goldened wooden sculptures, and created church equipment. Perhaps, Hieronymus tried himself in this artistic smithery for the first time. In 1478, when the father died, Bosch became the owner of the shop.

Hieronymus was mentioned first in 1480. He wanted to have his own business and become independent from the name “Aken”; thus, the man took the pseudonym and used his native town as a part of his name.

1486 brought the breakthrough in Bosch’s career: he entered the Illustrious Brotherhood of Our Blessed Lady that worshiped the Virgin Mary. The artist decorated celebratory processions and rituals and painted the altar for the brotherhood’s chapel at St. John’s Cathedral. From that time, religious motives began to predominate in Bosch’s works.

The first paintings are notable for their satiric content; they supposedly pertain to the mid-1470s. In 1475-1480, Hieronymus created The Seven Deadly Sins and the Four Last Things, The Marriage Feast at Cana, and Cutting the Stone.

These pieces of art mesmerized Bosch’s contemporaries. For instance, Philip II of Spain put The Seven Deadly Sins in his bedroom so that reflections on the corrupted human nature would feel sharper.

Hieronymus laughed at people’s naivety and exposure to charlatans, including those who wore monks’ clothes. In 1490-1500, the new painting Ship of Fools was even more scathing: one could see monks singing songs among common people; a fool ruled the ship.

The scenery was also presented in the painter’s works. For example, the triptych The Garden of Earthly Delights illustrated the world on the third day of creation. There are naked people in the center: they are still in their blissful half-sleep, and incredible animals and birds surround them.

The most monumental among surviving work is the triptych The Last Judgment. One can see the Day of Judgement in the middle; virtuous people in the blue sky are opposing sinners pierced by arrows and lances. The left part illustrates dynamic Paradise. Eva’s creation is in the front while the Adam and Eve temptation scene is in the middle; the cherubim is expulsing the first people from Eden. Hell is pictured in the right part of the triptych.

The triptych form was Bosch’s favorite means of expression. Another famous work, The Haywain Triptych, consists of three parts. The center pictures a mad crowd taking a large cartful of hay to pieces – the painter unmasked greed. Besides, the secular and spiritual leaders symbolize pride; lovers reveal lust, and gluttony is expressed in the fat monk figure. The left and right parts contain the well-known motives of Hell and the Fall.

Bosch did not seem to prefer some particular genre: portraits, landscapes, architecture, animal painting, and decoration could be found in his canvases. Nevertheless, Bosch is considered one of the fathers of landscape and genre painting in Europe.

Hieronymus became the first artist in his country who created sketches before painting the actual work. The artist often took inspiration in gothic monsters from engravings or church frescos.

Hieronymus Bosch did not sign his paintings or dated them. According to fine art experts, the master signed only seven works, and the present-day names, probably, come from museum catalogs rather than the author’s mind.

Bosch worked in the la prima (“wet-on-wet”) technique. Traditionally, artists put several layers of oil and waited for each of them to dry before applying the next one. In comparison, Bosch put all oil on canvas at once.

In circa 1480, the painter married Aleyt Goyaerts van den Meerveen; they had probably known each other since their childhood. The woman came from a noble, wealthy family and gave her husband a good fortune.

As a result, Bosch could take the orders that seemed interesting to him without having to work for money only. No children were married in his union.

Bosch died on August 9, 1516. The funeral ceremony took place in the very chapel at St. John’s Cathedral he had painted. The artist was 66 years old.

Hundreds of years after Hieronymus’s death, a miracle happened.

In 1977, the grave was opened, but no remnants were seen there. According to the leader of the excavation, the historian Hans Haalfe, a piece of stone was found inside. As soon as it was put under a microscope to study, the stone started warming and shining. Thus, it was decided to stop the excavations.

Bosch’s works are exhibited all over the world: the Netherlands, Spain, France, Italy, Portugal, Belgium, Austria, and so on.