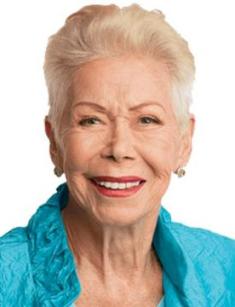 The writer and social activist Louise Hay had to overcome many ordeals. However, she learned how to go on and taught other people to heal: millions of readers realized how to make their dreams come true thanks to Louise’s books.

Louise Hay was born in Los Angeles on October 8, 1926, into a low-income family. The mother, Veronica Chwala, worked as a laundress. The girl never knew her biological father, and the stepfather was a heavy drinker. The parents paid little attention to the eldest daughter: Louise did not eat much and had only worn-out clothes, not to speak of personal warmth and care.

The would-be writer’s childhood was unstable and miserable. The least favorite child lived among rats and garbage; the stepfather often abused the girl and her mother. When Hay was five, Veronica got pregnant with her sister and fell into severe depression.

Poverty was not the most painful memory for Louise. Due to the parents’ lifestyle, the girl was surrounded by amoral people; she was raped by a tramp neighbor at five. Later, the woman shared in her interviews she clearly remembered the doctor’s examination. The criminal was sentenced to 15 years, but the victim was always told it was her fault. Hay spent many years fearing that her offender would be released from prison and revenge her.

Because of this childhood experience, Louise’s self-esteem was decreasing. One can see her dire state in the following story. When the girl was a fourth-grade student, other kids’ parents bought several cakes for a class party. It was the luxury that Hay’s parents could not afford, and she had never tried it before. Adults began to distribute pieces of cakes; some children had two or three pieces. Louise was the last in a queue; when it was her turn, all the cakes had already been eaten.

The writer analyzed that moment later and explained that the assurance in her nothingness made her stand at the end of the line. The young woman had to fight against these convictions for a long time.

As a teenager, Louise took psychedelic drugs; she left home for Chicago at 15 and had hookups voluntarily. As a result, the 16-year-old woman gave birth to a daughter and took her to a children’s home for adoption.

Life led Louise to New York. She worked as a housemaid, waitress, and salesperson. Further on, she tried herself as a model, and powerful men took a fancy in the youth. One day, Louise met the millionaire Andrew Hay, her future husband; the couple traveled around the world a lot and attended royal dinners. One night, they had dinner in The White House.

The young woman became a popular model and had a fascinating relationship with her husband, yet she sensed the lack of self-actualization until she started her spiritual quest.

Louise and Andrew spent 14 years together and had no children. One day, the man told his wife he was going to marry another woman. Hay was desperate. Days passed by, though. At some moment, Louise went to a psychic who told her that some trifle was going to change her life dramatically. The woman came back to normal and felt that everything happened for a reason.

One day, Hay attended a meeting of the Religious Science members. Although the lecture was full of complicated terms, she listened to it carefully and took an interest. Louise began to frequent meetings and took up classes; modeling and keeping the suitable waist size paled away.

Thus, the woman who had not even graduated from a middle school became a diligent student. She read everything she could get about metaphysics; the church became the second home for her and brought incredible changes in her life.

Three years later, Louse passed the exam and began to work with people who needed help. She did not limit herself with the little victory and entered a preacher college notable for its strict rules: no alcohol, no smoking, and studies on the weekend. However, Hay went all the way and finished the school.

From that time, Louise actively participated in meetings and gave professional advice to people. In 1984, she presented the first book, Heal Your Body, that gave her more popularity.

One day, the woman had to face another dreadful issue: she was diagnosed with cancer. However, the writer did not want surgery and began to cure herself: she read about alternative medicine, kept a diet, and worked with a psychologist. Six months later, doctors found no sign of cancer. Following the recovery, a small brochure was released; Louise described her battle against the illness. Further on, Hay’s physician told journalists that the disease was only an infused idea; however, it was unclear what the author implied.

The writer came back to Los Angeles, where she did not know anyone but her mother and sister. Whenever she met a new person, she would give them her brochure that was published as Love Yourself, Heal Your Life Workbook. According to the book, suggestions about one’s self often cause emotional problems, and a person can change their life for the better. This work was included in the NYT bestsellers list in 1984 and topped it for 13 weeks. One could read about psychosomatics, daily positive thinking, affirmations, and love for oneself.

Patients were seeking the writer’s help, and she was often invited to deliver a lecture. Two years of work gave Louise the opportunity to buy her own house.

One day, Hay’s sister informed her about the mother’s disease: the old woman had spent two months in a hospital and needed care. Louise took her mother to her place; gradually, the family relationship improved.

In 1985, Louise began to work with six men with AIDS; the group increased up until 850 members three years later. Hay initiated the support of such people long before red ribbons were introduced. The writer also published the book about this disease The AIDS Book: Creating a Positive Approach in 1988.

Soon, the lecturer headed her own publishing company Hay House. What used to be a non-commercial organization in a living room transformed into a prosperous corporation printing millions of books.

In 2004, Louise Hay appeared at The Oprah Winfrey Show and The Phil Donahue Show; the sales of You Can Heal Your Life increased enormously. The next year, Hay House radio was launched. In winter 2014, people could attend the writer’s personal exhibition of paintings and graphic works in California.

Louise Hay led a healthy lifestyle until her last days; she promoted positive thinking for people with AIDS, helped get rid of panic attacks, and delivered lectures for abused women.

The writer died on August 20, 2017, in her sleep; she was 90 years old. The documentary movie about her had been filmed before her death.

Louise Hay’s net worth was about $50 million by the time of her death.

“We are each 100% responsible for all our experiences. Every thought we think is creating our future. The point of power is in the present moment. When we really love ourselves, everything in our life works. We create every so-called illness in our body. We must release the past and forgive everyone”.

“Every thought we think and every word we speak is creating our future”.

“The mental thought patterns that cause the most dis-ease in the body are criticism, anger, resentment, and guilt”.