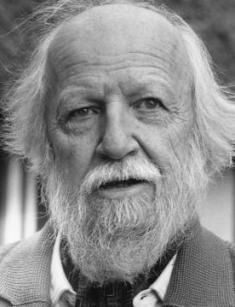 In his long life, William Gerald Golding was an outcast and Sir; he commanded a landing ship during the World War II, received prestigious literary awards, and visited the European writers’ forum in Saint Petersburg. The novelist’s books explored the phenomenon of evil and became an integral part of international literature.

The would-be Nobel Prize winner was born in September 1911 in Cornwall. The boy’s father, a school vice principal, was a person of many talents: he created and published scientific books and masterfully played the flute, keyed instruments, and strings.

Bill’s mother, a convinced feminist, had a mental disease and threw knives and other items at her son in the evening. There was an old cemetery near the family mansion.

Golding was a lonely, anxious, and insecure boy; he was interested in literature and mathematics. At 12, he decided to become a writer but started studying sciences instead, according to his parents’ will. He entered Brasenose College, Oxford, but the love for linguistics turned out to be stronger, and the young man transferred to the philological faculty.

Golding’s first works were poems: he sought comfort in them. William was not close to his course mates: they humiliated him and called him “not quite a gentleman” due to his “common” origin.

Young Golding tried many activities: he staged his own plays in a small London theater, worked at a clearing house and flophouse, and taught at Salisbury. The future novelist also served in the Navy: the military duty stripped him of illusions about human nature.

William Golding took up writing at 51. His legacy consists of large forms of prose. The first book Lord of the Flies was entitled Strangers from Within at first; the novel’s way to its readers was long. Publishing houses rejected it more than 20 times; it was released after many editorial corrections and renaming.

This story is a mixture of the coming-of-age drama, anti-utopia, and robinsonade. In comparison with Defoe’s and Verne’s characters, these “civilized” people do not culturize the island: on the contrary, they get savage and give in to hatred and feud. The fact that all the characters become murderers and victimize children makes the story even scarier. The novel is full of metaphors. For example, Piggy’s glasses are the symbol of the civilized way, and the paint that the teenagers use on their faces stands for the faceless cruelty of a crowd.

It is interesting that the writer himself did not like Lord of the Flies and felt frightened to re-read the book. He appreciated the second novel, The Inheritors, set in the primitive society. The next story, Pincher Martin, is also set in an island.

Apart from Lord of the Flies, critics value The Spire full of thoughts about the price of inspiration, Darkness Visible with its Biblical references, and Rites of Passage that won the Booker Prize. The novel The Paper Men and the collection of novellas The Pyramid are considered the most ambiguous books.

Free Fall has autobiographical motives: the writer’s father became the prototype for Nick Shales. The realistic description of the main character’s torture in a camp is one of the most memorable scenes.

In 1983, Golding gained the Nobel Prize in Literature. Five years later, the British Queen offered the old man the knighthood.

The last novel, The Double Tongue, was presented in 1995, after the author’s death.

William Golding looked more like an old sea dog rather than a famous writer, and he behaved accordingly. His hair was always messy, even when he visited the Nobel Prize ceremony.

Those who knew Golding believed that a monster was resting inside him. William also gave hints: he described the attempt to rape a 15-year-old girl, a bunny’s murder, and sinister secrets that would appear when somebody would write his biography. The writer could drink heavily, and he was furious at such moments. Besides, he used to mention his favorite activities: humiliating people and carrying out psychological experiments.

The man’s psychological state did not prevent his personal life from being steady. At the age of 28, William married the chemist Ann Brookfield. They spent the whole life together and had two children: the son, David, and the daughter, Judy.

The young woman presented the memoirs Children of Lovers: A Memoir of William Golding by His Daughter by her father’s centennial and claimed that her dad was a kind and lovely person; the quotes about sins and profaned women were taken from the context. However, she also said the novelist’s absorption in himself, his wife, and work made the younger family members some kind of social orphans.

Golding had many phobias: he was afraid of snakes, jointed-limbed animals, height, and injections. He was bad at getting geographical directions.

The writer died at 82. The cause of death was the same as his father’s: oncology followed by the remission period and acute myocardial infarction.

The funeral ceremony was held at Salisbury Cathedral. The novelist’s wife lived two more years and died; she was buried with her husband in Bowerchalke.

William Golding’s net worth has not been revealed; it was estimated at $1-10 million by the moment of his death.

“History is the nothing people write about a nothing” (Darkness Visible).

“Maybe there is a beast… Maybe it’s only us” (Lord of the Flies).

“And dying is more natural than living, because what could be more unnatural than that panic-stricken thing leaping and falling like a last flame beneath the ribs?” (The Spire).

“People were never quite what you thought they were” (Lord of the Flies).