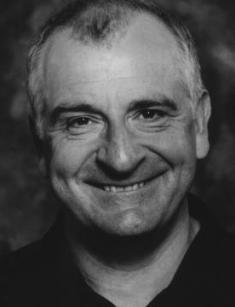 The British writer, whose boundless imagination gave readers around the world such fantastic masterpieces as The Hitchhiker's Guide to the Galaxy, The Restaurant at the End of the Universe, So Long, and Thanks for All the Fish, and many others. The name of the science fiction writer Douglas Adams is famous for high grossing Hollywood screen adaptations of his works, which to this day are of interest to producers and directors of new films.

English author, playwright, and screenwriter Douglas Noel Adams was born on March 11, 1952, in Cambridge, United Kingdom. Parents Janet (née Donovan) and Christopher Douglas Adams moved to Essex immediately after the birth of their son, where their second child, Susan, was born.

When Douglas Jr. was five years old, Janet divorced her husband and, after taking the children, settled in Brentwood, Essex. Here the boy graduated from Brentwood School in 1970. His passion for writing began when he was still a student. Young Adams was very successful in composition lessons, where children wrote stories, and managed to get the highest marks from a strict teacher. In 1962 and 1965, Douglas's stories were even published in school journals.

In 1971, the young man entered the St John's College, Cambridge Before this, Adams decides to travel to Istanbul by hitchhiking, as he was short on money. He reached the Turkish city, but from there the unlucky traveler was expelled by the city authorities. Adams traveled back across Europe and once spent the night in the Austrian Innsbruck right in the middle of a clear field. Slightly drunk, lying and looking at the stars, he thought:

"Someone should write a guide to the Galaxy for hitchhikers."

If only he knew back then that this idea would bring him global success,

In 1974, Douglas received a bachelor's degree in English literature. The graduate began to work with television to write scripts for TV shows and sketches. In particular, he worked with the then-popular comic group "Monty Python." However, all this activity did not bring him money; the guy couldn't even afford to live on his own, so he stayed with his mother.

In 1976, the situation with money worsened, he lived from hand to mouth. Not a single one of the producers took Adams' idea of making a science-fiction show seriously. The writer was quite desperate when he suddenly received support in the person of radio producer Simon Brett, who worked for the BBC. With his approval, Adams developed the script of his show The Hitchhiker's Guide to the Galaxy; it was released on the radio on March 8, 1978.

Despite the skepticism of producers who "pushed" the premiere to the most unpopular time, the show took off: newspapers published positive reviews, and soon the ratings started multiplying, as well as the audience. A bright streak began in the biography of Adams.

After all four episodes went on air, Douglas, who by that time received the position of radio producer, received an offer from the publisher, who wanted him to turn the show into a novel. Thus, in 1979, the first book of Douglas Adams "The Hitchhiker's Guide to the Galaxy was published. In the first three months after the release of the novel, 250 thousand copies were sold, and the author became the youngest writer who received the Golden Pan literary award (awarded for one million books sold).

The novel, according to critics, really exceeded all the expectations: the original story, flavored with subtle British humor (many phrases have become famous quotes). The main character – Earthman Arthur Dent and his friend Ford Prefect leave the Earth before its destruction by Vogons – green alien men. Vogons torture friends, and then kick them out into space, where they are picked up by a spaceship – and that's how their adventurous journey through the Galaxy begins.

In 1980, the author wrote the second book of the cycle – The Restaurant at the End of the Universe, which was a continuation of the adventures of Arthur and his friends. The third part of the cycle – Life, the Universe, and Everything was released in 1982. At the same time, Adams' works were included in the American bestsellers list published by the New York Times. It is believed that a British author had not achieved such a success in the United States since Ian Fleming, the legendary author of the books about James Bond.

In 1984, Douglas wrote the fourth book of the series, So Long, and Thanks for All the Fish, and in 1992 came out the final part, Mostly Harmless. Adams frankly disliked these two works and openly stated it in an interview about the earlier book:

"I shouldn't have written it, and I knew it, even when I was working on it. I did the best I could, but it still wasn't, you know how they say, from the heart."

However, it is known in which direction the inspiration of the writer flowed. In the '80s, he became seriously interested in computers and accepted the offer of the company InfoCom on the development of a computer game based on the "galactic cycle," which went on sale in 1984. Also, already fed up with the theme of fiction, in1984, the Britt wrote the book Meaning of Liff together with a friend and radio producer John Lloyd, and in 1990 its sequel – The Deeper Meaning of Liff.

The author moves away from fiction in a series of books about Dirk Gently. The series is written in a mixture of detective genres, mysticism and humor. Not all fans of Adams understood their favorite author after the first book Dirk Gently's Holistic Detective Agency (1987), but he still wrote two novels-sequels: The Long Dark Tea-Time of the Soul (1988) and The Salmon of Doubt (2002).

The last book was published after the author's death. Also, Douglas Adams did not see how the dream of his last years, the film adaptation of The Hitchhiker's Guide to the Galaxy, came true. Adams managed to interest the Disney Studio in the production of the film based on his cult novel, and he began working on the script, which was completed by Garth Jennings and Karey Kirkpatrick. The motion picture The Hitchhiker's Guide to the Galaxy, which starred such actors as John Malkovich, Stephen Fry, Zooey Deschanel, was released in 2005.

Also in the bibliography of the writer, there are books written in co-authorship: with Mark Carwardine, on rare and endangered species (Last Chance To See), with Graham Chapman (The Private Life of Genghis Khan), etc.

The writer was not known as a ladies' man. Ther is information about only two women who became his muses – both he mentions in his work. The first is writer Sally Emerson. Their love affair began in the early 1980s; the woman then left her husband, who, by the way, studied at the same school with Douglas Adams – Peter Stothard.

However, Sally did not leave her husband for a long time and soon returned to her previous family. Friends introduced the heart-broken sci-fi writer to an attorney, Jane Belson. The personal life of the couple was difficult; the lovers broke up and made up. They even had a broken engagement in the history of their relationship.

Finally, on November 25, 1991, Jane and Douglas became husband and wife. And in June 1994 they had a daughter Polly Jane Rocket Adams. In 1999, the family moved from London to the United States, having chosen the California town of Santa Barbara.

The death of the writer came suddenly – he died on May 11, 2001, at home in Santa Barbara due to a heart attack. Douglas Adams was buried at Highgate cemetery in London.

The grave of the writer is decorated with a modest monument of gray stone without a photo, and next to it – a pot with numerous pens and pencils. Fans of his work leave their stationery, paying tribute to the beloved author.