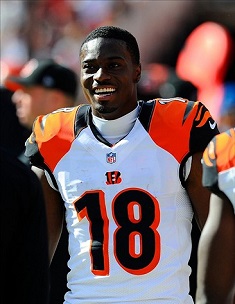 The South Carolina native, Adriel Jeremiah (A.J.) Green started a football career in NFL in 2011, as a rookie of Cincinnati Bengals. He plays at a wide receiver position. In his first seven seasons in NFL Green was named to The Pro Bowl seven times, become the first rookie to make such achievement. Green is one of the best wide receivers in NFL history. He extended his deal with the Bengals in 2015 and signed a four-year $60 million contract. Also, Adriel is married and has two sons. Green has a net worth of $35 million, including all of his properties and earnings.

A.J.’s birthplace is Summerville. He was born to his parents on July 31, 1988. They were a middle-class family. Green’s father was a driver and steelworker, and his mother was an employee of Sam Walton’s company. Green started his sports career from juggling. He began doing it when he was in the second grade.

Around fourth grade, he added unicycle riding to his repertoire. Green studied at the local high school, where he began interested football and basketball. The head coach of Summerville Wave noticed Green’s talent and allowed him to play for the major team. In 2008 the reviewers called A.J. the most prospective player of that Class.

Early age did not prevent Adriel from being named to four All-State awards. In 2006 Green was included in the shortlist of All-American. From a purely physical standpoint, Green had everything that was needed to be a top receiver: size (6-foot-4), leaping ability, and deceptive speed. He stood apart because of his intuitive skills when the ball was in the air, the instincts honed at an early age when circus acrobat appeared his most likely career option.

In 2006 Adriel received early scholarship offers from a lot of colleges: Clemson, South Carolina, Michigan, Florida State, and others. In October 2006 Green announced the place, where he would like to spend his college career. He chose the University of Georgia.

In 2008 the Georgia Bulldogs signed Green officially. Green was in a fire in his first college season. In September he recorded eight catches for 158 yards, both career highs. Also, he completed one touchdown. He became the first Bulldog to have more than 100 yards receiving in a game since 2006, and his performance was the best since 2004.

In September 2010 NCAA suspended the prospective wide receiver for four games. The reason was A.J.’s selling of a bowl jersey to a man who was qualified as an agent. However, by the end of the 2010 season, Adriel became team’s leader in a total number of catches. In January 2011 Green announced his Draft campaign. His college stats were 166 catches, 2 620 yards, and 23 touchdowns in 32 games for Georgia.

In 2011 Adriel was drafted by the Cincinnati Bengals at number four. The sides signed a four-year $19.6 million contract. In October Green took the NFL world by storm. The rookie wide receiver had 29 catches for 453 yards and four touchdowns already that season. It seemed Green was going to become a great dynasty.

According to NFL Draft Scout, A.J. used his size very well, and passers were very aware of his prodigious frame when deciding whether to throw a questionable pass his way. He was a nightmare matchup for most teams, as a player who drew many high passes and jumped balls and thus required a tall CB be draped on him at all times.

In his rookie season, Green was named to Pro Bowl. Next seasons he continued to break records, scoring career and franchise highs in catches and yards. Green was named to Pro Bowl every year in his first seven seasons. On, October 23, 2016, he made simply unbelievable and mind-bending “catch of the year”. Seven seconds left and on the Browns’ 48-yard line, the Bengals tried to extend its four-point lead with a Hail Mary.

Quarterback Andy Dalton stayed nice and composed and took advantage of the good pocket that opened up around him. Meanwhile, the Bengals sent four receivers downfield to attack the five defensive players the Browns left behind. They all crunched together in the left-center of the end zone, and it was A.J. Green who got the tip.

Green trained very hard. His coach detailed everything, and it was just as painful as it sounded. Curtis Winters started by putting Green through a 45-minute ab workout—400 reps through four different movements. Then, Green made at least 20 sprints up a 50-yard hill that jetted straight up.

Then, it's off to lift weights, where Green pushed himself as hard as possible to match Chiefs pass-rusher Justin Houston, even though Houston was 50 pounds heavier. At the bench press, Green refused to go lower than 315 because, as he was going to keep driving until he matched. Then, to cap it all off, Green caught 150 balls at the Jugs machine, or pushed pickup trucks, or something else Winters thought up that would break most men.

In 2018 season Green was limited to just nine games due to a right toe injury and ten games in 2016 because of a hamstring tear. Green required surgery on a toe on his right foot after a Week 13 performance against the Broncos. He finished 2018 with one of his worst statistical seasons, grabbing just 46 balls for 694 yards on six touchdowns.

On July 28, 2019, A.J. Green suffered a left ankle injury which was expected to keep him sidelined for the next six to eight weeks. Green ran down the sideline and tried to receive a football thrown by quarterback Andy Dalton during the last portion of 7-on-7 drills. Cornerback Dre Kirkpatrick broke up the pass, and the two players fell to the ground. Kirkpatrick got up with a slight limp, but it was Green who stayed on the turf.

Green was eventually helped to a nearby bench on the sideline and was attended to by the Bengals’ medical staff. The veteran wideout was emotional while the medical officials evaluated his left leg. After a few minutes, Green was carted off the field while a worried 7,500 spectators in attendance chanted his name. The injury couldn't have happened at a more inopportune time for Green. Entering the final year of his contract, Green was negotiating a third deal with the Bengals.

Adriel is married to Miranda Brooke. The couple tied the knot in March 2015. Green’s wife is a musician, and they first met on Facebook.

They dated for a long time before getting married. The star-studded wedding included John Legend singing and a host of his teammates partying, held in Atlanta. In September 2016, Adriel and Miranda welcomed their first child, son Easton Ace Green. On February 21, 2019, Adriel gave birth to their second son, Gunnar Blaze Green.