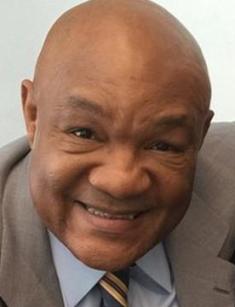 Even those far from sports have heard the name of the legendary boxer George Foreman. He devoted 18 years to boxing and finished his career at 48. Today, the former athlete is an ordained minister with a kind smile; one can hardly believe that Foreman was among the hardest-hitting heavyweight boxers in history.

The future sportsman was born in Marshall, Texas, in January 1949. The boy’s father, Leroy Moorehead, died soon after his son was born, and the mother married again. There were seven kids in the family; the parents hardly had money for food.

The stepfather, J. D. Foreman, worked at a railway. He liked to spend time in a bar and wasted his money there; the family had to survive with the mother’s earnings. George lacked parental attention; he showed bad academic results and bullied other kids. At 15, the future athlete was expelled from school.

The teenager often fought with peers and participated in street “wars” but mended his ways soon and joined the Job Corps. Thanks to this program, the underprivileged could obtain a profession and practice sports.

The young man became a carpenter and bricklayer; he also took up boxing at that period. Frequent training gave results soon, and George started his amateurish career in the ring.

The victory at the National Boxing Championship was a significant event. Foreman left the Job Corps and continued to defeat his opponents. In 1968, the athlete won the gold at the Olympic Games in Mexico: it was an excellent achievement for the person who had had only 25 amateurish fights before.

20-year-old George switched to the professional boxing and had 13 fights in his first year; the first seven victories were marked with knockouts. In 1970, Foreman faced 11 opponents including the Canadian George Chuvalo (a referee stopped the spectacular fight during the third round) and the Argentinian Gregorio Peralta who managed to cut open George’s eyebrow but still lost.

In his first years, Foreman showed immense physical strength and powerful hits; his gloomy, abstracted facial expression completed the image. The man’s height was 6.3 feet (192 cm.), and his weight was 218.26 lbs. (99 kg.). Fans often compared him to the former champion Sonny Liston.

Foreman’s career was developing rapidly. In 1972, the boxer had five matches in 12 months and finished them all with knockouts in second rounds. The next year brought the meeting with the then-unbeaten champion Joe Frazier. It took George less than two rounds to take his rival down six times. Four minutes 35 seconds later, a referee stopped the fight and gave the victory to Foreman; thus, the athlete gained the WBA, WBC, The Ring, and lineal heavyweight titles.

Foreman defended his title three times. The first match against José Roman lasted for 50 seconds and became the shortest Heavyweight fight in history. The second opponent, Ken Norton, was knocked down three times during the fight and lost eventually; his coach came to the ring and stopped the athletes.

The meeting with Muhammad Ali was the most challenging event. Ali was well aware of his opponent’s might and chose the right strategy: he was avoiding Foreman’s hits and attacked him when he got tired. A referee stopped the battle during the eighth round, and Big George lost.

It was a severe blow for the American; he did not appear in the ring for more than a year, except for exhibitory events. In 1976, the athlete got his second breath: he changed his coach and came back to sports. Ron Lyle was the first opponent after the long break; Foreman won, but the victory was challenging. The rematch with Joe Frazier was held five months later; George gained another victory and also knocked out Scott LeDoux the same year. However, the second loss followed in 1977: Jimmy Young knocked him out.

The failure led to an unexpected turn in the boxer’s career: he quit the sport and devoted his life to faith. Initially, Foreman was a minister in Houston and opened a church in 1980; the foundation for the youth opened four years later. Since George had to invest his own money, he ran out of it soon and decided to return to boxing.

The 39-year-old athlete put on some weight, but his defensive skills were just as good as they used to be. The first year in the ring brought five victories in a row. Dwight Muhammad Qawi, Bert Cooper, and Gerry Cooney were his rivals. However, Evander Holyfield stopped the chain of successful performances in 1991. Fans expected the meeting of George Foreman and Mike Tyson, but it never happened; both athletes did not regret it.

Further on, Foreman faced Jimmy Ellis, Alex Stewart, and others. 1993 was marked with the loss to Tommy Morrison. Still, the 45-year-old man rehabilitated and crashed Michael Moorer, taking back the champion title in 1994. The next year, George refused to fight Tony Tucker for some reason and had three other fights until he finished his career for good. According to Ring, the sportsman was number nine in the rating of the strongest punchers in the 20th century.

The boxer’s personal life has been full of events. In 1971, Foreman married his first wife, Adrienne Calhoun. They spent three years together and divorced in 1974. In 1977, Cynthia Lewis became the sportsman’s wife, but this union did not last long either: they split up two years later.

In 1985, George married Mary Joan Martelly; they continue to live together today. Both Foreman and Martelly are spiritual persons. They dreamed of a large family and had ten children: five sons and five daughters. Besides, they adopted two girls.

Judging by George’s Instagram page, he likes to travel and spends much time with close people. One can also see posts about sports.

In March 2019, the media reported the tragic news: the athlete’s daughter, 43-year-old Freeda Foreman died. She was also a professional boxer and gained five victories; the woman finished her career after the sixth consecutive losses. Her body was found in her own house in Texas; according to the police, it was a suicide.