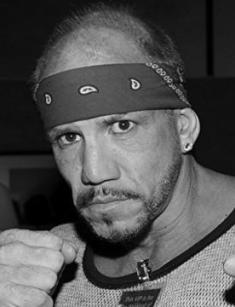 The American boxer Tommy Morrison had a short but impressive career in 1988-1996. The WBO Champion became famous not only for his remarkable victories in the ring but also roles in movies and TV projects. The collaboration with Sylvester Stallone in John G. Avildsen’s Rocky V became the peak of his popularity.

Tommy David Morrison was born on January 2, 1969, in Gravette, Arkansas. The boy’s mother, Diana, had Native American roots, and the father came from Scotland.

When Tommy was a small baby, the family moved to Jay, Oklahoma. There was little amusement for teenagers in the neighborhood, and ten-year-old Morrison followed the example of his elder brother, who practiced sports. He joined a baseball club but got excluded several months later due to his behavior. The hooligan wanted to take revenge and burn indecent words on the field but, instead, destroyed the whole lawn.

The parents had to think about a new club for their son. Tommy learned the fundamentals of boxing and forged his documents to participate in a competition for beginning athletes. Later, Morrison told The New York Times that he had 15 matches with older opponents and won 14.

The sportsman also mentioned in his interview that his mother organized a competition in the backyard of the house: a bottle of soda was the prize. The five-year-old boy crashed his rival, who was three years older.

In 1988, Morrison won the regional Golden Gloves and reached the national level; he faced Derek Isaman there and lost. As soon as Tommy returned home, he participated in the Olympic trials and earned the Outstanding Fighter title there.

The young man’s professional career began with the fight against William Muhammad. The event was held on November 10, 1988, in New York and lasted for four minutes: Tommy successfully knocked out his opponent. Three weeks later, the boxer had another advantageous performance; by the end of 1989, he had 19 victories in 19 matches.

The first loss happened in 1991: Morrison faced the former world champion, Ray Mercer. The more experienced athlete defeated Tommy in the fifth round.

In 1992, the man came to his senses and gained six victories which made him the first Native American who challenged the reigning Heavyweight champion, legendary George Foreman. Young Tommy did not want to fight at close quarters and chose the wait-and-see approach with quick long-distance attacks. As a result, Foreman gave in to the speed, and the jury named Morrison the winner.

The sportsman had to defend the title and fight Tim Tomashek whose techniques were not so good. Soon after the event, people started talking about Morrison’s battle against the WBC champion Lennox Lewis. However, when little-known Michael Bentt surpassed Tommy, the meeting was postponed.

In October 1995, after the sportsman became the IBC Champion, Lewis and Morrison met at the ring of Convention Hall. Lewis took the initiative and knocked down his opponent with powerful blows four times. Eventually, the jury stopped the fight: Morrison could barely see the ring because his eyes were swollen, and the blood was running. Thus, the Canadian got the victory.

By 1996, Tommy fully recovered, and rumors had it he was going to fight Arthur Weathers and Mike Tyson. However, these plans had to be canceled: the man was diagnosed with HIV. The next years brought many attempts to come back to boxing and get the right to participate in official matches. Still, Morrison succeeded only in 2007 and faced the mixed martial artist John Stover and the boxers Marcus Rhode, John Castle, and Matt Weishaar.

Although Tommy Morrison won the majority of his fights, his fame was less sparkling than that of Mike Tyson or Evander Holyfield. The boxer became popular thanks to the movie Rocky V by John G. Avildsen. As the story runs, an inexperienced young fighter masters his skills under the guidance of the famous champion, Rocky Balboa. However, he turns out to be just a pale shadow of his teacher: he cannot even oppose him in a street fight.

Tommy’s height was 6.17 feet (188 cm.), and his weight was 275.58 lbs. (125 kg.); he looked good in the screen. However, the project did not bring popularity. The movie was banal and received the nomination for the Golden Raspberry; it was also included in the 100 worst ideas of the 20th century by Time. Morrison quit acting career and had only one episodic role in the TV comedy series Cybill.

The athlete’s personal life was chaotic: alcohol, drugs, dozens of women in various cities, and two kids born to the 19-year-old father. Many girlfriends accompanied Morrison at competitions, and the coach was trying to persuade him to settle down. However, the sportsman liked women’s attention and ignored his words; he continued to have unprotected sex.

When the boxer learned that he had HIV, he married his old acquaintance Dawn Freeman. The happy life with television, pizza, and marihuana stopped quickly: Dawn Gilbert came to his life and became his lover.

The women knew about each other but tolerated the situation. In 1999, when Tommy was arrested for possessing drugs and arms, Freeman demanded a divorce and left forever.

Gilbert was more patient. She waited until Morrison was released and persuaded him to start the treatment course. The immunodeficiency-associated virus fell back. The couple lived together until 2007 and broke up after the athlete came back to boxing.

Patricia Harding became the man’s last wife; she did not believe that HIV and AIDS were related. The details of their relationship remain unknown.

By summer 2013, 44-year-old Morrison got bound to bed. He died on September 1 at the Nebraska Medical Center in Omaha.

The Nebraska Department of Health & Human Services reported that the boxer died of a cardiac arrest caused by multiorgan failure and septic shock.

The relatives had a marble slap and photo put on Morrison’s grave; the words “In memory of a loving son, brother, and father” can be seen there.