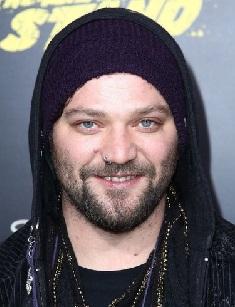 Brandon Cole Margera is an American filmmaker, musician, and professional skateboarder. He gained recognition after an appearance on MTV's Jackass (2000–2002). Margera has also directed and starred in three movies: Haggard, Minghags, and Bam Margera Presents.

Brandon Cole Margera was born in 1979 in Pennsylvania to April and Phil Margera, both television personalities.

Brandon has an older brother, Jess, who is a musician. The nickname "Bam" Margera got because of his grandfather who noticed the kid's habit of running into walls. Speaking about Brandon's education, he attended West Chester East High School, where he dropped out.

Margera's career started with him shooting videos of his friends and himself while they were doing stunts and skateboarding. Eventually, this became the CKY video series. CKY means "Camp Kill Yourself," and that is also a name for Jess Margera's band. In Brandon's first videos appeared a lot of his friends, including Brandon Novak, Rake Yohn, Ryan Dunn and others who created a collective, the CKY Crew.

After this success of CKY, a showrunner Jeff Tremaine noticed Margera and invited him to the team which would later become the cast of the Jackass, a comedy series created by Tremaine and Johnny Knoxville. In 2003, Brandon starred in the Grind where four men followed a professional skateboarder from Chicago to California. After its release, critics did not give it many positive reviews, but it was rated better by the general public.

Later, Margera got his own MTV series, Viva La Bam, which ran in 2003–2005. In this show, Brandon and his crew performed different stunts. In 2008, Brandon's wedding was filmed as a follow-up to the Viva la Bam. Also that year, he played a role in the pornographic film The Fantasstic Whores 4 together with his fellow Brandon Novak.

In spring 2016, Margera appeared on the reality show, Family Therapy with Dr. Jenn, together with his mother, and they discussed Brandon's self-destructive behavior.

In 1997–1998, when his career was just in the process of development, Toy Machine Skateboards was the sponsor of Margera. In 2001–2015, Brandon was a part of the Team Element. Since 2017, he has been without significant sponsorships and has finished with professional skateboarding. Only once, he returned to this field, at the Element Skateboards' 25th anniversary, to release ten his most striking designs of decks.

Margera wrote and starred in the movie Haggard (2003) which was based mostly on the real life of his friend, Ryan Dunn. Brandon also was a director of Minghags, the sequel to Haggard. It was shown for the first time on August 2007, at Sikes Hall. In 2008, Margera released Bam Margera Presents: Where the#$&% Is Santa?. It was about Brandon and his friends going to Finland and looking for Santa Claus.

In 2015, Margera announced that he would release an autobiographical documentary film, and one of the central parts would be dedicated to Ryan Dunn, who died in 2011 in a car crash. The first title was I Need Time To Stay Useless but then it was changed to Earth Rocker. However, in 2017, Brandon said that he had paused that project and could not do it anymore.

For 2019, Margera has a net worth of $50 million which he got from his music, acting, film making, and skateboarding.

Speaking about Margera's dating history, firstly, he was engaged to Jenn Rivell, a single mother who had a daughter, Gabrielle Mathesson. They have been together for seven years till 2005. In 2006, Brandon filed for a restraining order from Jenn after she broke into his house.

In 2007, Margera married his childhood friend, Melissa Rothstein. In 2009, the actor was taken to the hospital due to his four-day alcohol binge. Next year, Brandon openly said that he and his wife were not living together anymore. Only in 2012, the spouses got divorced. In 2013, Bam married Nicole Boyd, and their wedding took place in Iceland. In 2017, their first child was born. The baby got the name of Phoenix Wolf.

By the way, Margera's problems with alcohol did not go away. Lately, at the beginning of August, he got kicked off the airplane for being too drunk. Besides, Brandon posted some inappropriate messages on his pages on Twitter and Instagram, where he, for instance, called the police officer an idiot and filmed him.

Now, the skateboarder owns two houses in the West Chester, and one of them is known as Castle Bam, where Brandon throws huge parties from time to time.