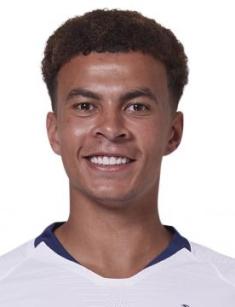 Every soccer fan is familiar with behavioral rules for players and visitors. Athletes are forbidden to uncover parts of their bodies when they score and get excited. Obscene gestures, abuse, and throwing things in the field are also banned.

However, some incidents still take place. In 2015, a flare hit Igor Akinfeev during the meeting of the Russian and Montenegrin teams; the match was suspended. In 2018, Dele Alli was hit by a bottle in his head during the game with Arsenal; it happened during the EFL quarterfinal. However, the athlete said the incident made the victory of his club even sweeter.

The young star of Tottenham knows how hard the road to success is. Bamidele Jermaine Alli, also known as Dele, comes from Milton Keynes; he used to live in the neighborhood that was pretty unpleasant to visit even in the daytime.

The boy was born on April 11, 1996, into the family of the Nigerian father, Kehinde, and the English mother, Denise. The next week after his son was born, Kehinde moved to the United States. The mother had alcohol issues and brought up Bamidele alone. The family hardly had enough money; the future soccer star spent all his savings on the sport.

“From Under-9 to Under-11s, I played in a Sunday league. Before that, there was this scheme where you had to pay £1 to train, and I used to do that. But I wasn’t able to pay it and, in the end, they let me do it for free”, the athlete remembered.

When Alli turned nine, the father took him to Nigeria; the boy went to a local school. Further on, he returned to Denise and continued his education at Stantonbury Campus and The Radcliffe School. Dele was a self-willed hooligan, and it was difficult for him to deal with people at school. He could be expelled any time, and the chances for a decent future seemed minimal.

Elder friends let him borrow their boots; the young talent did not seek easy rides. Soon, the coach of Milton Keynes Dons noticed Dele and invited him, saying that the game with Chelsea youth team was going to be held. Alli was not qualified for that match, though; he left and returned the next year.

Soon, some family changes took place: the teenager moved to his club friends’ parents, Alan and Sally Hickford. Although there was no official adoption, the boy began to view them as his stepparents. Later, the athlete refused to have the second name “Alli” on his uniform: he felt no connection to it. Thus, there is only the first name on his T-shirt.

Dele’s first professional match took place at the beginning of November 2012. He played against Cambridge City. His backheel pass made the coach Karl Robinson furious. Soon, Alli scored his first goal in the replay against the same team.

When the young man turned 18, his club MK Dons defeated its archenemy, AFC Wimbledon, and then gained a historic victory over Manchester United: when the halfback passed Luka Modrić himself, the latter could do nothing but swear at Alli. According to Dele, he did not want to humiliate someone: he just wanted to show the sunny soccer, just like his childhood icon, Ronaldinho.

Alle’s performance was not spotless at first: pullbacks, yellow and red cards, and disqualification. However, the player drew the right conclusions and continued to polish his skills. In 2018, when Dele was suspected of simulating, his teammate Eric Dier stood for him.

Soon, the results of the 20-year-old athlete proved to be brilliant: he surpassed David Beckham and Cristiano Ronaldo in the number of assistance acts that they had at his age.

In 2015, Alli transferred to Tottenham Hotspur and debuted against the Red Devils in the new team. However, he returned to his home club at the end of the season on loan. The same year, the sportsman was invited to the Britain and Nigeria national teams. The media reported that the biological father appeared in Dele’s life: he was the king of a large tribe in Nigeria. The man organized the meeting of his son and the president, but the collaboration did not take place.

The biological parents started following Alli, and they were prohibited from going to the stadium. In comparison, the young man remembers the family that brought him up; for example, he gave an expensive mansion to his stepbrother as a present.

Some reporters say that Dele has more scandals than goals: they mean scoring chances and the personal disgrace.

In February 2018, an adult video leaked to the Internet: the player – or the person who was assertedly him – was having sex with the model Ruby Mae. The video provoked a public outcry; Alli’s lawyer claimed there was no evidence that the man in the picture was his client.

Although the height and body shapes were similar, the video character had no tattoos.

Dele met his girlfriend in London at a party; they have been together since April 2016. Ruby tries to accompany the athlete in significant matches and sometimes posts their happy photos on Instagram: for example, their vacation on Ibiza or Alli’s practice.

The player is a fashionable person: he has his own clothing line and often experiments with his hairstyle.

In 2018, the sportsman stood out for his virtuoso goals, a sharp conflict with Ivan Rakitić in the semi-final of FIFA World Cup, and the challenge in the form of the monocle sign. Fans and colleagues caught it up; its creator made it more complicated seven days later.

Although Dele failed to get bronze medals at the World Cup, he did not leave Russia empty-handed: a taxi driver gave him a bracelet as a present. The end of 2018 was pretty unpleasant: somebody threw a bottle at him, and the player had an injury.