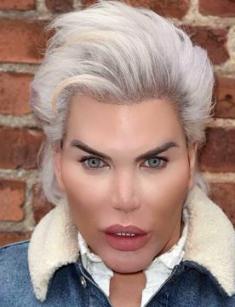 Rodrigo Alves is a Brazilian-British model. He underwent more than fifty plastic surgeries and procedures, spent more than one thousand dollars to look like Barbie's boyfriend, Ken. The man is a perfect example of plastic surgery addiction.

Rodrigo Alves was born in Brazil but soon moved to the UK. In childhood, he was an ordinary child. He does not hide his children photos and regularly posts them on the Internet. But Rodrigo says that his peers often scoffed at him. Once he had even his face pushed against the urinal because he had a wide nose.

At that time, watching the Disney cartoons, he thought that the heroes were ideal. But he saw an unattractive guy in the mirror and dreamed of changing his appearance.

At the age of 17, Rodrigo was diagnosed with gynecomastia, swelling of the breast tissue in men. Then he decided to undergo surgical intervention. When they removed extra tissue, and the man was discharged from the hospital, he realized that he was ready to change his appearance.

While studying at college, he began to undergo one operation after another. His main goal was to "transform" into Human Ken Doll and to perfect his appearance.

When he returned from London to his homeland, the parents were shocked at the changes. And they decided to send him to a psychiatrist. The doctor revealed an anxiety disorder when a person is worried and does not like his appearance. Rodrigo underwent a course of treatment, and psychiatrists said that the young man was fine, but self-perception problems did not go away.

The process of turning into Ken is expensive and painful. First of all, Rodrigo decided to change the nose he hated, because of which he was always teased. According to him, the nose occupied almost half of his face. Of course, it was impossible to reduce it at once, so he had one operation after another.

After the third rhinoplasty, a sinkhole suddenly appeared in his nose, which caused necrosis. Rodrigo's nose was blocked, so doctors had to replace the destroyed tissue to save his life. As a result, ten rhinoplasty operations were performed. But that did not stop him. He spent 30 thousand euros on a nose job. European plastic surgeons began to refuse such an extraordinary client, and he came to eastern surgeons.

Bald patches annoyed him no less than the nose. Unlike Rodrigo Alves, the Ken doll had beautiful thick hair. So, the model not only increased his hair volume but also changed the hairline. Moreover, the man got rid of unwanted hair and paid 70,000 euros for full body laser hair removal.

It is easy to guess that the man changed the shape of the lips, having five implants inserted into them. He also increased the fullness of the upper lip to make it look sensual and sexy. Rodrigo underwent eyebrows, eyes, and face lift surgeries.

It is noteworthy that the man has a negative attitude toward sports. To improve Ken's figure, he had to insert silicone gel breast implants and fake abs. He also had liposuction, pumping fat from the abdomen, body sides, and buttocks. Later, he decided that it was not enough for chic buttocks, and he also had buttock augmentation.

The man also built bigger biceps and triceps with the help of silicone implants. But Ken got into trouble again; either they brought an infection, or the injected substance got into the blood. His arms were swollen so that he could not even move them. The man was on the edge of life and death. For three weeks his muscles were paralyzed.

Alves had the last operation in January 2018. He had four ribs removed. He was the first man to undergo such a procedure. Now his waist does not resemble Ken's figure, but Barbie's one with measurements that are 24 inches around the waist.

As a result, he has undergone more than 60 plastic surgeries and spent over 600 thousand pounds. The man admitted that the only part of his body that he has not changed is his penis.

In 2013, the toy company which manufacturers Barbie and Ken dolls produced 1 million dolls, modeled after Rodrigo. Moreover, they were sold like hotcakes. His body is insured for £1 million, and every month he spends about £4,000 on different procedures.

Nowadays, he is pleased with his appearance and considers himself an ideal man. He understands that any surgical intervention is a test that not everyone can stand. Therefore, the man does not encourage anyone to repeat his experience. He explains his "reincarnation," saying that he was born in the wrong body, his soul and brain could not put up with it.

Although he is finally happy, the model is not going to stop improving his body. Rodrigo plans to prevent aging and look forever young. Nowadays, he is undergoing stem cells treatment.

Rodrigo Alves has not told about his personal life for a long time. In all likelihood, he did not have any relationship since he devoted all his time to perfecting his appearance.

The man has recently begun posting photos with Sophia Vegas on Instagram. She is a German model and TV presenter. Like Rodrigo, the young woman is a fan of plastic surgery. Following the example of Alves, she also had four ribs removed. They do not confirm their love affair, but, on the contrary, convince everyone that they are just friends who share a love for fashion, style, and plastic surgery.

In February 2018, Rodrigo Alves visited Moscow. According to Ken, he wanted to find his love in Russia. He attended the program Male/Female, but the TV show nearly caused a scandal. The fact is that the man thought he was invited to talk about his exquisite sense of style and make-up for men, but it turned out that the human dolls were discussed on the program, and the participants had mainly a negative attitude towards Alves.

But since his primary purpose of visiting Russia was to get acquainted with the Russian Barbie, he went to the most popular reality TV show Dom-2 (House-2). He liked Marina Afrikantova, Olga Buzova, and Oksana Ryaska. After filming, he even wanted to get their phone numbers. He also expressed a desire to become a member of the TV show.

Nowadays, Alves is a regular protagonist of society columns, a participant in fashion shows and parties. He hosts dozens of different television shows. At the moment, Rodrigo is the most popular Human Ken Doll in the world.

Rodrigo Alves has an estimated net worth of £30 million.