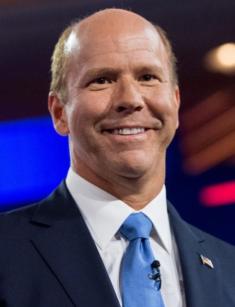 The Wood-Ridge native, John Delaney became widely known in 2017, declared his candidacy for President 2020. He was a congressman from Maryland in 2013-2019. Also, John was a successful businessman in the past. Currently, he is married and has four children. Although Delaney’s net worth changed from year to year, in 2019, he is one of the wealthiest US Democrats with an estimated value of $180 million, including all of his properties and earnings.

John’s birthplace was a borough in Bergen County, New Jersey. It was called Wood-Ridge, and its population was about 7,500 people. John appeared on April 16, 1963. He grew up in a blue-collar family. His mother was a housewife who brought up John and his sister. His father was a simple electrician. John’s grandparents were the UK natives and found jobs in Jersey City.

John grew up in a hardworking family and started working as a kid. Most of all he liked working in the summer. Over the years, he tried his hand as a bricklayer and digger, a painter, a landscaper, and an electrician’s assistant, working side by side with his dad. The two spent a lot of time together. John visited dad’s various job sites, rode in his truck and met his many friends of various occupations.

Meanwhile, John was hanging out with his dad and his friends at their favorite local bar. Despite simple professions, John’s parents purchased some rental properties, and there was always work for his dad to do with him fixing them up. Being very skilled, John’s father was considered to be an excellent electrician. He even was the foreman on the state’s largest projects, and John helped him.

At the same time, John was studying at the Bergen Catholic High School. His parents never attended college but helped their son to enroll at Columbia University. John was managed to pay his way through the help of scholarships from his dad’s labor union and several related organizations.

Delaney was a good example of the American Dream, as he lived it. Countless doors of opportunities were opened for John. In 1985 he became a Bachelor of Arts. In three years, Delaney graduated with the Juris Doctor degree from the Georgetown University Law Center.

Despite their growing numbers, smaller health care operators often fell between the cracks when it came to financing. The search for a lender who was familiar with health care typically led smaller operators to a local branch of a national lender. HCFP aimed to make loans available for every-sized companies. After the company became public in 1996, Delaney sold it in 1999 to Heller Financial Inc. of Chicago for about $483 million in cash and stock.

John Delaney said his company would continue to operate as an autonomous unit of Heller, with the same top management. In 2000, Delaney founded a commercial lender, named CapitalSource. The company would be praised several times in the 2000s for its investment strategy and corporate culture. In 2004, the Wood-Ridge native became the best entrepreneur of the year, according to EY.

Delaney appeared on the political field in 2012, after the great changes in Maryland's 6th district. Democrats began to increase their influence after ten years of Republican hegemony. John Delaney became the Democrats’ leader and won the general 2012 elections, collected 58.8% of votes.

Delaney came as a political newcomer. That’s why he was considered to be the more genuine candidate, who brought a strong focus on job creation, an executive’s perspective on the economy, and moderate views on social issues. He had established himself as a self-made millionaire who touted his working-class father, glided effortlessly between conversations about the federal policy on education, energy, and immigration.

Delaney won the general elections of 2014 and 2016. In 2017 he made Election Day the federal holiday. Just over seven months since President Donald Trump was sworn into office, John Delaney announced his candidacy for president in 2020, earlier than any of his opponents and more than three years before Election Day. His announcement was met with mockery.

Delaney said that he didn't regret announcing so early; he believed that it was the only way for him to get any attention. He often spoke about the campaign like a set of business problems to solve. In the beginning, he languished at around one percent in most national polls. He started touring the country. He visited every county and state, where Democrats had a little chance to win.

On March 15, 2019, getting a spot on the debate stage was proving to be a difficult task for many of the candidates in the 2020 presidential race, after the DNC set requirements to qualify, including reaching a minimum of 65,000 individual donations. That prompted lesser-known candidates to get creative, like John Delaney, who was pledging to contribute his own personal money to charity when he received a campaign donation.

Delaney announced a new plan to boost campaign contributions. The campaign said in a statement that Delaney would personally donate $2 to non-profits and charities for each new donor that contributed to his campaign. No matter the amount an individual donated, John promised to chip in $2 of his large personal wealth to a charity that donors could choose from a pre-approved list.

In June 2019, John Delaney was trending on Twitter, at last. But his brush with fame probably wasn’t what he’d hoped it would be when he first launched his campaign. Delaney made the news because he got booed at the California Democratic convention. “Medicare for All may sound good, but it’s actually not good policy, nor is it good politics,” he told a resistant audience.

Delaney strongly believes in the freedom of religion, and the separation of church and state. According to his beliefs, religious doctrine should not inform public policy: faith can inform an individual, but it should not sway public policy.

John completely supports a woman's decision to make her own reproductive decisions about her own body. He doesn't struggle with abortion as a matter of public policy. Also, Delaney is a strong supporter of LGBTQ.

John is married to April McClain. They met each other at Georgetown. In 1990 the couple tied the knot, but when they got engaged, April didn’t want to move to the big city, such as New York. So, the spouses decided to stay in Washington, D.C. John and April have been blessed with four daughters, from 10 up to 24 years old. Faith plays a very important role in the family’s life. They are Catholics. Currently, the pair resides in Maryland with their girls and two dogs.

On July 31, 2019, as the Democratic hopefuls faced off on the issues gripping the nation, viewers finally realized what certain candidates reminded them of. While some viewers were carefully considering the important topics brought to the table at the Democratic debate, others were creating thoughtful comparisons between the ten presidential hopefuls on stage and various fictional characters and body parts. John reminded people of Johnny the manic control-room worker from Airplane!, The Almighty Loaf, and Hank Hill from King of the Hill.