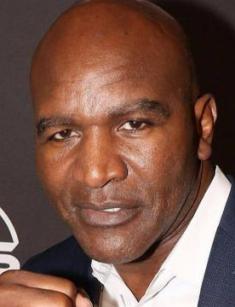 Evander Holyfield managed to become a sports legend in his lifetime. The biography of the famous American professional boxer is full of bright and unforgettable fights. Excellent technique, perfect kicks, ability to predict the tactics of the opponent - this makes the performance of the athlete exemplary. The man has impressive external parameters with a height of 6 ft 2 1⁄2 in (189 cm) and weight of 225 lbs (102 kg).

American boxing star was born on October 19, 1962, in Alabama. His family was large, and the boy was the youngest of the children. Therefore, in childhood, the sportsman had to say goodbye to tricks and pranks. The mother, Annie Laura Holyfield, brought up the kids with their grandmother. Being religious, the woman taught children to follow their goals, to be disciplined.

At the age of four, a boy and his family moved to Atlanta, Georgia. During these years, Evander was distinguished by his soft, calm character. At the same time, his family felt great energy in him. From the age of eight, the child started playing sports at a local children's club. Holyfield tried himself in several sports disciplines at once, but the boy was particularly interested in the boxing section. Carter Morgan was the coach of the young boxers.

Morgan managed to see in the fragile boy the future star of the world ring. When he was young, the sportsman gained experience from his coach and learned the secrets of mastery. When the young boxer turned 16, Carter passed away. The event was a blow for the guy, he wanted to give up his training, but decided for himself that leaving would be an insult to the philosophy of his favorite coach, and continued working out.

In the same year, the boxer won the southeastern region championship. After three years, he performed as a U.S. representative in Caracas and took 2nd place. But the boy's cherished dream at the time was to participate in the Olympics. In 1984, the athlete managed to make it happen. Then Holyfield received a bronze medal.

Professional career began for a boxer in the autumn of 1984. Then Holyfield won the fight over Lionel Byarm. Over the next few years, the sportsman won the world heavyweight championships. In 1992, Evander lost to Riddick Bowe, but a year later returned his champion status in a rematch.

The peak of his boxing career was a fight against Mike Tyson. The fight took place in 1996, although fans of the athletes were expecting it back in 1991.

The fastest knockout in the world

The first time the fight was postponed because of Tyson's injury, the second time the planned fight was also cancelled - Mike was imprisoned on rape charges at the time. The decisive fight took place on November 9.

In the ring, Holyfield won and regained his WBA title. At the same time, the winner was offered a rematch. Boxers met again in the summer of 1997 - the match attracted a huge audience of fans.

The tense struggle reached its peak - Tyson was madly aware of his defeat and was disqualified from his opponent's earlobe. Photos of the moment of great significance quickly spread all over the world.

In the 2000s, the boxer continued his sporting career. Among those whom the man fought were Lou Savarese, Sultan Ibragimov, Nikolai Valuev and others. The last professional match of the fighter took place in 2011. In the following years, he entered the ring in show fights. According to experts, Holyfield managed to retain his corporate identity and recognizable style - perfected skills and rejection of brute force. Evander won 44 out of 57 fights, 29 of which were knockouts.

The sportsman's first wife was Paulette Bowen. The marriage lasted from 1985 to 1991. Paulette gave the boxer two sons.

At the same time, the mother insisted that the world ring star met her father. The men quickly found common ground, and, according to Holyfield, communication continued until the death of his relative.

Evander's second wife is Janice Itson. The marriage, like the first one, did not last long - from 1996 to 2000. The third wife of the 40-year-old boxer at that time was Candi Calvana Smith, then aged 24. The couple lived together from 2003 to 2012. Evander has six children in total - 2 sons and four daughters.

In 2019, Holyfield continues to follow the events in the world of boxing. The sportsman gives interviews in which he provides marks to young boxers.

Evander also supports his son, who decided to follow in his father's footsteps and make a career in boxing. Evander Holyfield has a net worth of $1 Million as for 2018.