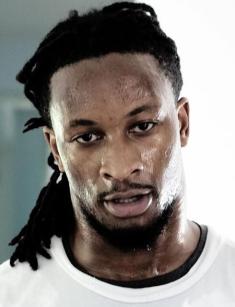 Todd Jerome Gurley, who was born on August 3rd, 1994, is a popular American running back. Being an NFL player, he spent time with many football teams, especially with the Los Angeles Rams. His hometown is Baltimore, in the state of Maryland. He is of American nationality and black ethnicity.

Born in Baltimore, Maryland, Todd was raised in a well-established American family. His dad's name, by the way, is Todd Gerome. His mom is Darlene, and she worked as a nurse. Todd was raised along with four other siblings.

In his childhood, Todd was a student at the local high school in Tarboro, a city that is located in North Carolina. Then he enrolled in a college in Georgia.

Todd is also known for playing football in college and the 2015 NFL Draft. Todd won Offensive Rookie of the Year after running for more than 1,000 yards in his debut season, making an immediate impact. He twice held the league record for running touchdowns from 2017 to 2018, and in the latter, he was recognized as the AP NFL Offensive Player of the Year. Additionally, Todd was selected to three Pro Bowls and two first-team All-Pro teams. He started having trouble with injuries during the 2018 postseason, and the Rams released him following the 2019 campaign. The next season, he was a member of the Atlanta Falcons. Todd spent a year in free agency before announcing his retirement in 2022.

The St. Louis Rams picked Todd with the 10th overall choice in the first round of the 2015 NFL Draft. He was chosen first overall in that year's draft as a running back. One of the five rookies chosen for the Pro Bowl was Gurley. He defeated Winston for the NFL Offensive Rookie of the Year award. In the NFL Top 100 Players of 2016, Todd's fellow players ranked him 22nd.

Todd agreed to a one-year, $5.5 million deal with the Atlanta Falcons on April 6, 2020. A $2 million signing bonus was included in the agreement, as was $500,000 in incentives if he amassed 13 touchdowns or 1,000 running yards. Todd acknowledged his retirement from professional football in an interview in October 2022 after declining to play in 2021.

Not much is known about Todd's life. He is dating Olivia Davison. Todd has an Instagram with several thousand followers where he shares his personal life with fans. Todd is also involved in philanthropy. The athlete is known for being the advertising face of such companies as Pizza Hut, Carl's Jr., and Hulu.

Throughout his career, Todd got the following awards: