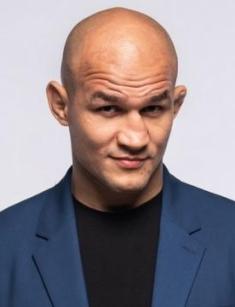 The Brazilian fighter, Junior dos Santos, is a recognized mixed martial artist who competes in the heavyweight division and specializes in Muay Thai and Brazilian jujitsu. Having defeated such rivals as Frank Mir and Cain Velasquez, the athlete won the Ultimate Fighting Championship title. According to surveys by the MMA Fighting, Sherdog, and Fight Magazine, he was ranked number 3 in the UFC world ranking, failing to surpass Francis Ngannou and Stipe Miocic.

The childhood of fighter Junior dos Santos Almeida was similar to most of the stories that happened in the poor neighborhoods of Brazilian cities. He was born in Caçador on January 30, 1984. His alcoholic father did not support the boy who was raised by his mother. The woman had to provide for the children on her own.

10-year-old Junior found a job to help the family and began to train Capoeira to protect himself and his relatives from ill-wishers and possible enemies. In his youth, dos Santos became interested in the Brazilian martial art, founded by Mitsuyo Maeda, and he began training in jiu-jitsu under the supervision of a talented mentor, Yuri Carlton.

After six months of hard work, the young man won several minor tournaments in Salvador. Then, he met former boxer Luiz Carlos Dórea and began to master the striking technique and soon was involved in mixed martial arts and participated in his first professional fight.

In October 2008, dos Santos made his debut at the UFC 90 tournament and knocked out Fabrício Werdum in the ring at 1 minute and 20 seconds with a strong uppercut, which earned him a "Knockout of the Year" award. After four months, the fighter, who was no longer considered an outsider, defeated the UFC newcomer, Stefan Struve, and then continued his successful performances, defeating Mirko Filipović, a Croatian athlete nicknamed Cro Cop.

In 2010, Junior, who had already been nicknamed Cigano, thought about getting a heavyweight title and challenged reigning champion Cain Velasquez. From the very beginning, dos Santos dominated the opponent and knocked him out in 64 seconds. So, the Brazilian athlete won the first and only UFC heavyweight title and managed to defend it in the fight with challenger Frank Mir, who began his career at IFC Warriors Challenge and then had a deal with Bellator MMA.

Junior dos Santos prepared for the second defense together with the best Brazilian athletes, including Antônio Rodrigo Nogueira, Demian Maia, and Anderson da Silva. He trained a lot in the homeland of his favorite style of jiu-jitsu. However, contrary to expectations and predictions, he lost the championship title to Velazquez. Later, the Brazilian explained that he was defeated due to rhabdomyolysis, which caused the breakdown of muscle fibers that released their harmful contents into the bloodstream.

Cigano experienced another unfortunate defeat in the fight that was repeatedly postponed. His rival was Alistair Overeem, who had problems with the license and doping but accused the Brazilian athlete of powerlessness and cowardice in an interview shortly before the long-awaited bout in the octagon. Thus, the Dutchman felt psychologically comfortable.

Before the crucial fight with Francis Ngannou, Junior was convicted of doping, and USADA pulled him from the match for several months. After the suspension, dos Santos managed to get the banned hydrochlorothiazide out of his system and win the battle with former WSOF Heavyweight Champion Blagoy Ivanov from Bulgaria. Later, he defeated little-known Australian Tai Tuivasa via technical knockout and got the Fight of the Night award for the battle with Derrick Lewis.

Junior dos Santos became independent early, and he immediately took care of his private life and married Visana Piccozi in the early 2000s. However, after ten years of mutual respect and happiness, the fighter announced that he was tired of the relationship, which depended on his income, and divorced his wife for the benefit of his career.

Having coped with the separation, Cigano married the second wife and soon became a happy father, posting the photo of his son and daughter on the official Instagram page.

In the spring of 2019, the UFC announced that dos Santos would face Francis Ngannou, the Cameroonian mixed martial arts leader, on June 29. The start of the fight was successful, but then Francis threw a series of punches on the chin and knocked out Junior, defeating him via TKO.

In an interview, Junior admitted his mistakes and said that he gave his opponent that victory, which he planned to devote to his mother and daughter, Maria, who had been born a month before the fight.

Junior dos Santos has a net worth of $10 million.