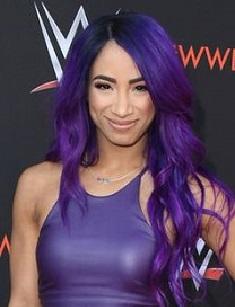 If a woman is angry it is better to keep away from her. But how to act if you faced an angry woman who has a 10-year experience in wrestling? Would you run away, hide or play dead? In case this woman is Sasha Banks – it is better to get acquainted with her. Her biography is worth reading!

Sasha Banks’ birthplace is California. She was raised according to Christian canons. Remarkably, Banks’ family was a very religious one – alongside her relatives, Sasha attended a local church several times a week.

As a kid, she was forced to change places of living constantly – her mom had a serious disease, and the family often moved from one place to another to undergo surgeries and consult with doctors. Moreover, Banks’ younger brother is an autistic. From the very infancy, Sasha has always helped her parents in taking care of the boy.

At last, they settled down in Boston where Banks could focus on doing wrestling. Young Sasha became interested in fighting being a child and joined a local wrestling team as a teenager. Banks didn’t get support from her mother when it came to her hobby. The woman wanted her daughter to become a singer performing at a church.

Speaking of Banks’ nationality, she has a fusion of European and American blood.

2008 was marked by Sasha Banks’ joining Chaotic Wrestling. In her first fight ever, the girl alongside Nikki Roxx faced Alexxis and her partner. Unfortunately, Banks’ pair was defeated. Interestingly, they eventually got along well and managed to remain friends even out of wrestling.

Banks succeeded to record her debut victory only three years later. So, fighting against Alexxis and her partner, Banks alongside Becky Lynch used an astonishing trick and knocked the opposers out. The two following matchups also happened to be successful for the sportsman – she beat Finn Balor and Alexxis again. Then, she faced Barbie, Aida Marie, and Charlotte Flair in summer 2011 and became a winner of these fights.

In August, Sasha Banks concluded a contract with WWE.

As for more recent years of her career, in 2017 Banks paired with Mickie James and Bayley to begin a rivalry with the team named Absolution. As a part of their competition, several single fights were arranged – and Absolution’s members majorly won. This rivalry evoked lots of unpleasant scandals. For example, in March Banks accused Bayley of betraying her (as the woman has started communicating with one of their opposers) and the two began a fistfight backstage.

Fortunately, cast managed to separate them before they killed each other. Banks challenged Bayley for a fight eventually. Their matchup was held the following week but was not ended because the girls began using banned kicks. So, the world witnessed their friendship had been destroyed.

Close friends advised them to visit a psychologist to deal with the problems in their relationship. After a couple of sessions, Banks and Bayley reconciled.

In summer Sasha Banks got injured and had to miss three months of fighting to recover. Having returned to the ring, she was paired with Natalya and Bayley to face The Riott Squad – Banks’ team won the opposers. The following match against Nia Jax also brought Banks a victory.

In February 2019 Banks was one of the contestants of the Women Wrestling Tournament. Her squad was defeated by The IIconics. The following morning Banks didn’t appear at WWE talk show. According to her, she had personal reasons for it. Gossips appeared the woman would leave WWE because of her unsuccessful matches.

Speaking about Sasha Banks’ private life, she has a husband named Sarath Ton. The two tied the knot in 2016 – but the publicity became aware of their marriage only one year later. Interestingly, Banks and Ton invited only several closest pals and family members to their wedding ceremony. Other people could know the news only because of pictures on Instagram. Once Banks was answered by journalists why she kept their affair in secret. The woman shared that her fans sometimes were really aggressive and sent her then-boyfriend Ton threatening messages. That’s why she decided to keep her private life out of a public eye – to avoid scandals with fans and save her partner from possible harm.

The spouses got acquainted while attending a training camp – Ton is a former wrestler. Nowadays he is serving for WWE as a costume designer. Many WWE celebrities wear clothes designed by Sarath Ton.

Both Sasha and Sarath are big fans of rap music. They often visit rap battles together.

Earlier, there were rumors Sasha was romantically linked with Seth Rollins. However, it has not been proved.

Sasha Banks is related to the musician Snoop Dogg – he helped her in becoming a ring celebrity.

Banks is a bright personality – not only she impresses people around by her wrestling skills but by her appearance. So, she likes experimenting with her hair – she has dyed her hair black, blue, pink and other extravagant colors.